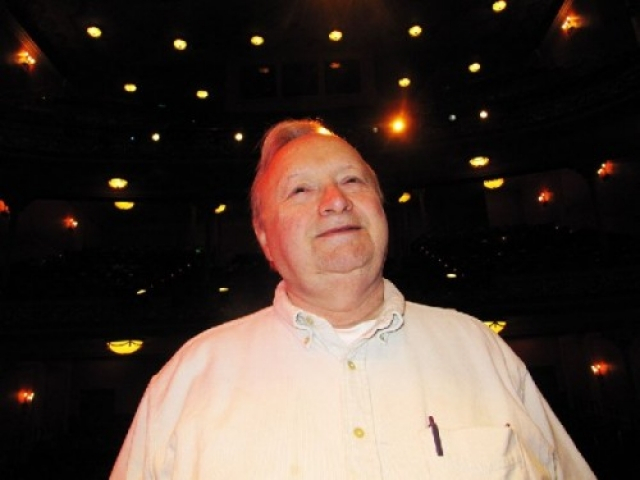 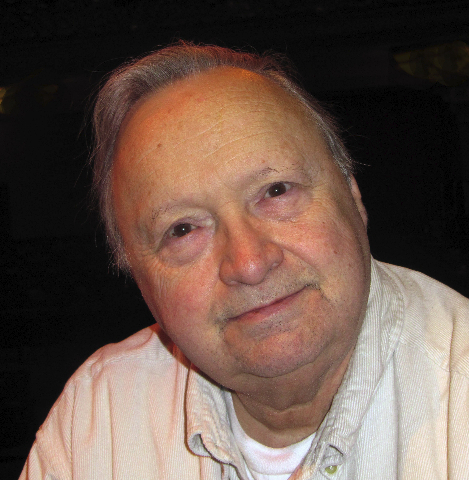 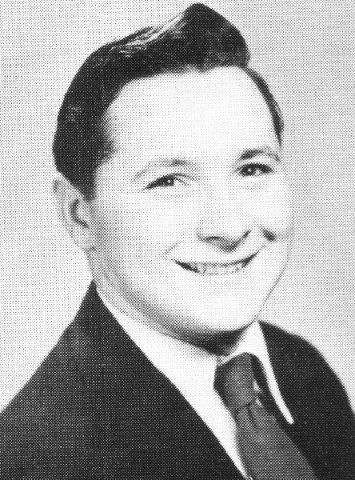 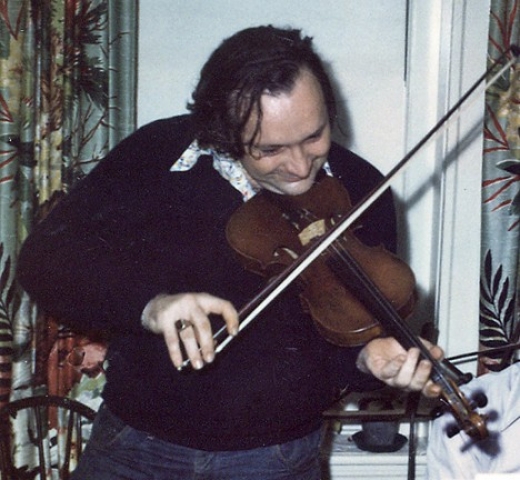 He had a lifelong passion for music. 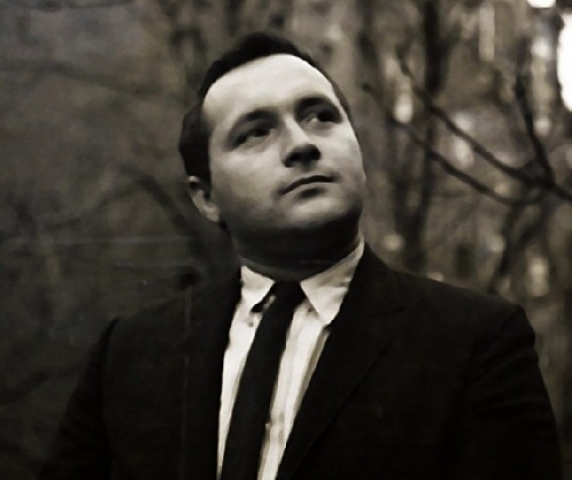 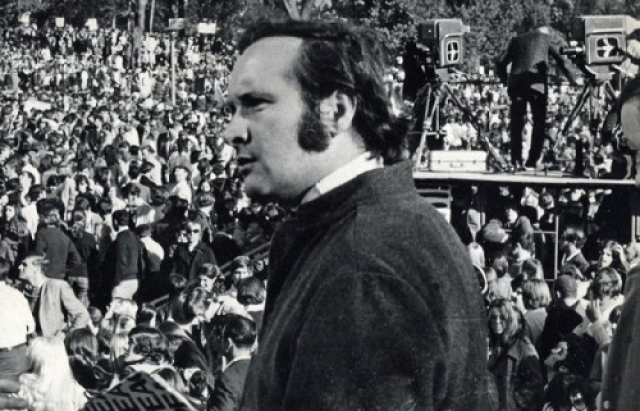 Check out the sideburns. 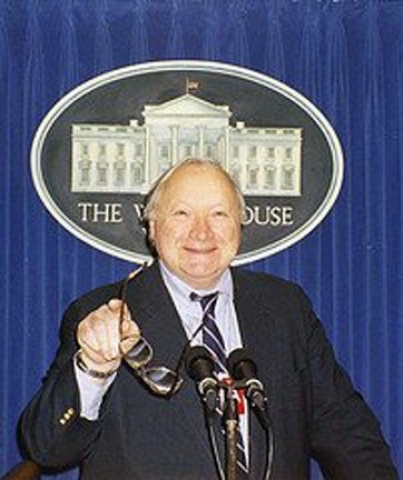 Lobbying for the arts, 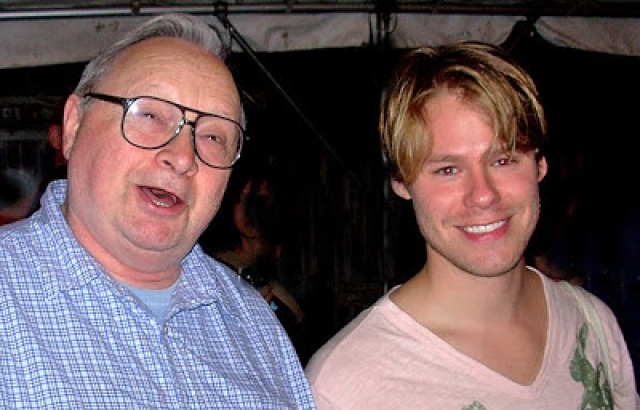 He loved this photo with Randy. Giuliano photo. 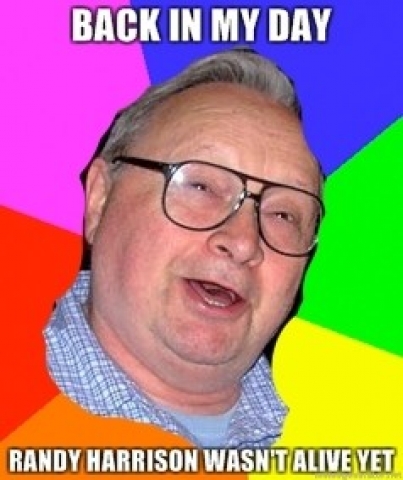 He loved to add graphics to his site. 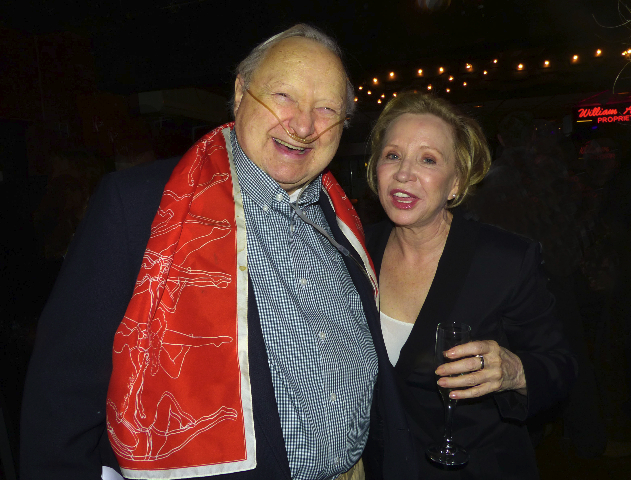 During the Berkies with Debra Jo Rupp. 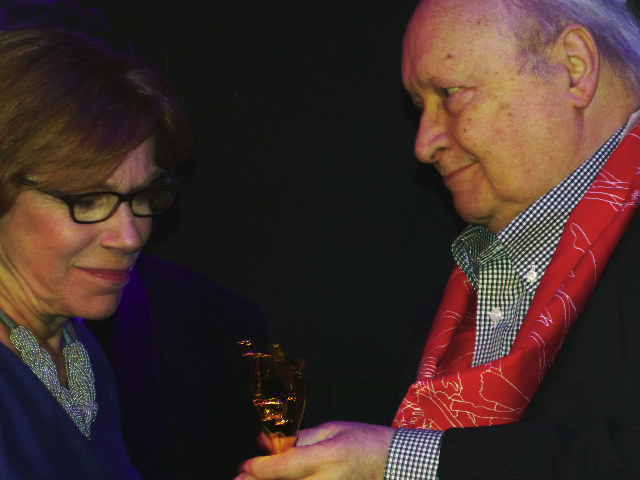 Larry presented the award named for him to Julianne Boyd.

After a long illness, on March 10, the widely respected publisher and editor of Berkshire on Stage and Screen, Lawrence “Larry” Murray, passed away.

Not long after we launched Berkshire Fine Arts he contacted me. Over one of many lunches that lasted for over a decade he told me of his background in marketing and PR for the arts.

He sang and played the violin in high school. In the Navy Band he played accordion, piano and various percussion instruments. That equated to a keen ear for musicals and often precise critiques of singers and orchestras. He was particularly invaluable covering new and developing musicals.

Larry worked for Peter Gelb of the Metropolitan Opera, E. Virginia Williams of the Boston Ballet, Sarah Caldwell of the Boston Opera Company, and for the BSO in Tanglewood among others. He was the founding director of Arts Boston which marketed half-price tickets and organized arts-related, travel groups.

Through the Navy and Arts Boston he had traveled the world.

During that first meeting we discussed the possibilities of crossing over to the dark side by covering theatre in the Berkshires.

Initially, we met when theatre schedules were announced and divided assignments. After a couple of years of this he launched the first of several sites and formats.

Early on, it was challenging for him to transition from publicizing productions to critiquing them. There was a phase of misgiving about writing something negative about performances.

That led to engaging in discussions of the role of the critic. As I insisted the first obligation is to the reader and from there to be fair, balanced, and honest.

Before long the mentoring went both ways. Now and then we would meet at the Chinese Buffet for conversations that stretched into hours. In between there were phone calls to catch up on the latest news and gossip.

Through his background in marketing Larry was particularly savvy about social media and website design. This was particularly relevant during time of dramatic transition that entailed the shrinking of print media, now in full crisis mode, and the developing relevance of on line publishing.

He was always on top of marketing and readership trends and I will truly miss his unique and valued insights. On our watch there have been significant changes and transitions in the administration and programming of Berkshire theatre companies.

While we were competitive in coverage, with exclusive interviews and news breaks, after posting it was lively and fun to compare notes. Often he would tease and tantalize me with hints of upcoming back stage news. Routinely, he knew shows and casts before they were announced.

For this he researched theatre media and sources. Larry was always on top of what was breaking. This was particularly true for his connections with the gay community and its deep roots in the arts.

At times he worked the aspects of fan and friend into getting interviews and scoops. As a teenager and young man, through doing odd jobs in theatre and marketing, he managed to become  friends with stars he admired. He did errands for Ethel Merman, worked his way into the dressing room of the stars, and was pals with Beverly Sills who was known as “Bubbles” to her friends. That was a reference to her love of champagne.

He had hilarious stories about Boston Pops conductor Arthur Fiedler. It seems that he ate the props, a bowl of walnuts, for a production of the Nutcracker.

Telling these stories would produce gales of laughter.

That was always welcome as there was an introspective, intensely serious side. Long ago he had learned to walk away from conflict. Those who knew him well were aware of  controls and limits he imposed. This extended to the doctors and systems that were treating him. It was typical that he would research what was offered as a diagnosis. There was an inherent mistrust of authority, be it government, or the medical community. He would accept nothing on face value.

It was that fierce independence that resulted in his becoming such a superb critic. Often he nailed shows that he covered. He would find something that nobody else would. Theatres often pulled his quotes for ads and PR. They were also aware that he was reaching a unique and valued audience.

Through what were, for a time, annual productions of Berkshire Theatre Group, for example, he became close to Randy Harrison and his fanatical, global fan base. All of his posts related to Randy went viral. Some got translated by Italian and Japanese websites. He knew how to work it baby.

When he became ill there were intensive discussions of legacy. How would what we have worked on and developed survive us? He arranged that his site, Berkshire on Stage and Screen, will continue with his collaborator of the past few seasons, the critic, Gail Burns.

Knowing that time and energy were limited he wanted to focus on a singular project. That evolved into forming the Berkshire Theatre Critics Association. There was an enormous effort in formulating and formatting ballots sent to members.

It was inspiring that he rallied the energy to be present for the First Annual Berkshire Theatre Awards. Last November there was a wonderful turnout for an awards celebration held at Mr. Finn’s Cabaret of Barrington Stage Company.

The evening culminated in an award, named for him, recognizing significant social and community contributions to theatre in the Berkshires. The first recipient was Julianne Boyd of Barrington Stage Company.

As a part of the mandate of Berkshire Fine Arts we have posted extensive interviews with actors, artists, playwrights, musicians, artistic directors and critics.

From January through March, 2011 we collaborated on an extensive interview covering his life in the arts as well as an overview of our craft and profession. This series is linked below. It presents Larry in depth with his own words. I am sure he would like that.