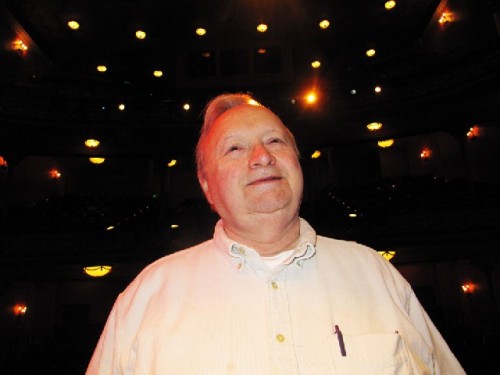 Larry Murray on stage at the Colonial Theatre, Giuliano photo. 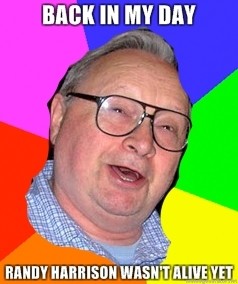 Larry is teased in this image posted to one of Randy Harrison’s global fan sites. 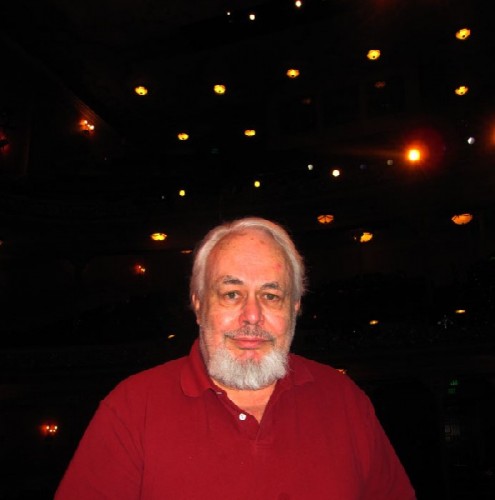 Critic Charles Giuliano on stage at the Colonial Theatre. Photo by Astrid Hiemer.

Charles Giuliano Back in the 1960s Marshall McLuhan stated that “The medium is the message.” A half century later that is more true than ever. The developments of media: cable television, talk radio, the internet, I Phones, I Pads,  social networking programs from Facebook to Twitter have completely transformed how we access information.

By dinner time when an ever diminishing audience watches network and local news broadcasts much of the day’s information is dated. The morning paper is a dinosaur. Mick Jagger sang “Who needs yesterday’s paper?” Now that might be upgraded to “Who needs today’s paper?”

We have seen an enormous impact on the integrity of intellectual property. With downloads and file sharing the recording industry has diminished. The market for CDs and DVDs is rapidly shrinking. Movies are pirated before they are released. Just as people gave up land lines for cell phones more and more are giving up cable TV. Those who stick with cable and satellite Tivo their favorite shows and watch them later which allows for fast forwarding and zapping the ads. I record football games and start watching an hour after the kickoff. That way I see the game and avoid all the time outs. If you watch in real time a one hour game takes more like three to watch.

Even movie DVDs, a source of revenue for film studios, has been impacted by the trend to download Netflix. For a minimal subscription there is almost limitless access. A consumer may view several films during an evening rather than lapses of days with snail mail delivery.

As on line bloggers we are in the thick of this evolution/ revolution. Because, for now, the internet remains free we are able to maintain a niche in cyber space for a modest investment. You have opted for a low cost blog hosting site for Berkshire On Stage. For Berkshire Fine Arts we have invested in expensive web design, hosting, and maintenance. The hope is to make the site attractive, accessible, and easy to navigate. The graphic look and regular upgrades are important.

Our content is immediately grabbed/ stolen. Through Google searches and image files potential readers come to our sites. Your Randy Harrison interviews and images go viral and circle the globe in a flash. Of course you do not get a dime for that piracy. Kids have come to think that content is free. Nobody wants to pay for intellectual property. But artists, painfully, have learned not to mess with Disney. Steal anything but Mickey Mouse and there is a knock on your door. Blame that on the late congressman from California, Sonny Bono, and the Hollywood lobby. They extended copyright so absurdly that Mickey or Elvis will never become public property during our lifetime. After several generations that content deserves to be generic. There are good reasons why intellectual property enters the public domain after a period of time.

In the current paradigm our intellectual property is stolen/ appropriated almost as fast as we can post it. While we are ripped off the other side of the argument is that we are accessible to ever expanding audiences. We strategize to find ways that increase google and search functions. If your Randy Harrison articles and images go viral that also means more global eyeballs for your content. The concern is that it is just grabbed and not linked back to your site.

When doing a google search I found that an Italian fan site had translated our articles on Randy. But at the bottom of the translations they added their own copyright. That just seemed so outrageous. So as a kind of tease I grabbed their translations and headlines which we reposted to Berkshire Fine Arts and added our copyright. Tit for tat.

We have often discussed this and I know that you are constantly looking at ways to take advantage of social networking. You promote and link your stories on Facebook. Also I have subscribers to my Constant Contact e mail blasts. Readers are used to getting e mails to remind us of fresh content. You have also noted the every tighter attention span of tweeters.

What is your take on the new media? How do you make the adjustments to keep up and increase audience share? In what way does that shape your mission and mandate? Over the past few seasons we have seen on line reviewers become ever more influential. We have also seen that arts organizations remain fixated on print media. There is no argument that a review in the New York Times or Wall Street Journal sells tickets. But how true is that of the Berkshire Eagle/ Transcript/ Advocate in the Berkshire arts market? We can be a lot more edgy, provocative and experimental than print media.

Larry Murray You bring up one of my heroes: "Art is anything you can get away with," McLuhan wrote.  Wouldn't it be wonderful if McLuhan were still commenting on the changing media scene. My favorite McLuhanism is  "We see ourselves being translated more and more into the form of information, moving toward the technological extension of consciousness. " When others purloin what I write, or my photographs, I am sanguine about it. Sometimes When I expected one of my photos to be ripe for copying, I embedded my name on it in a subtle way so that despite the image being appropriated, you would find my name if you enlarged it.

The openness of the web is curious. It provides plenty of images for my stories, and I am careful to give attribution when known. In the Berkshires we are fortunate to have Kevin Sprague doing so much of the theatre photography, his work is as close to perfect as you get. The companies who "saved" money by having some staff member take photos really end up looking amateurish next to his work.

CG To illustrate articles we frequently search the internet for images. Only on a couple of occasions have I been contacted and asked to remove the image in question. I would avoid taking images from potentially problematic sources like Getty Images or major news organizations like the New York Times. When we post images provided by art museums they require absurdly long credit lines. On the other hand, if other sites appropriate our text and images I do not complain. Of course if a news organization wants to use our content I would expect to be contacted. There have been times we  have been surprised to see our material used by Globe blogs. The Colonial Theatre has posted our content on their website without crediting or linking to the source. When I contacted them about it they added a credit line. But you shouldn’t have to ask. During high season we encourage theatre sites to provide links to our reviews on their web sites and e mail blasts. That’s a win win.

LM My approach to finding an audience is to give equal weight to the visuals,  videos and slideshows. I think people are reading more than ever on line, but I also think they are taking in more information visually than through words. And with so much information out there, I believe it is important to break up huge blocks of verbiage with subheads, or more, not less, paragraphs and other sorts of breaks.

I have been watching you play with your new staccato form of writing, short bursts rather than convoluted thoughts. I think that may be the wave of the future. Long form tweets in a sense. I absolutely refuse 2 go 4 the texting abbns. since they impede rather than improve the flow.

While the erosion of the print media is underway, and daily newspapers have been hemorrhaging subscribers, they are far from done. To be honest, they reach an older audience of readers, largely stay-at-home types, but they also reach the top demographic of local ticket buyers. The grey hair in the theatres matches the grey hair of their readers. So they will have a strong influence long into the future. From the standpoint of online writers it is comforting to see how much they have botched their online presence. The newspaper websites don't post all the stories they write in a timely manner, and they disappear with alarming rapidity. Online bloggers have beaten them into circulation hundreds of times in the past year alone. Our reviews, advance stories and news exclusives are now real competition for print media. Someone who wants to keep up with it all has to read both print and online.

CG  You recently stuck your neck out posting vivid detail about the deteriorating ability of James Levine to keep up with the demands of both the Metropolitan Opera and the Boston Symphony Orchestra. Your piece entailed speculation based on information you gleaned from blogs and social networking. These secondary sources informed your coverage. A couple of days later the Globe ran the story with quotes from Levine’s brother about possible schedule reduction. A day later the Berkshire Eagle quoted from the Globe coverage to speculate on Levine’s role in the coming Tanglewood season. You were out front on the story by speculating on rumors that became fact when the Globe reported them as facts. If we speculate on news developments there are times when our coverage may not get it right. But it may in fact tease out a story.

Consider what happened with Spiderman on Broadway. From the first night of previews members of the audience were tweeting and texting about the technical glitches. With months of previews the Times was way behind on the most important theatre story of the decade. Theatres, producers, and arts organizations tend to be control freaks. While Spiderman is unique, and may yet survive, a lot of shows in preview may be dead by opening night. There is no way to stop all the leaks. But positive tweets also fuel excitement and can dramatically build audiences.

LM As you point out, those of us online do not have to stick to the old journalistic formats where every opinion has to have a counter opinion. The comments section offers readers a chance to chime in on each story as well, so that you can get to the point faster, and if wrong, quickly suffer the consequences. We have both had our readers come after us with corrections and criticisms, as well as reinforce our points.

When all is said and done, the established media in the Berkshires tends to guard the status quo, while those of us online are looking for change and improvement. The election of Dick Alcombright is a classic example. All the media lined up behind John Barrett because, like it or not, that is who they knew best, they all had personal relationships with him. I remember us talking about entering into that election cycle from an arts standpoint, especially since there was a faction that wanted to get rid of the arts focus of North Adams and get back to factories. In the end both candidates advocated for the continuation of a cultural economy, and I like to think it was Berkshire Fine Arts that made that happen.