From PR and Marketing to Berkshire on Stage 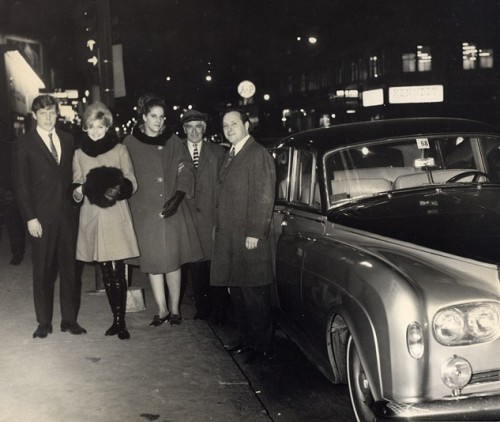 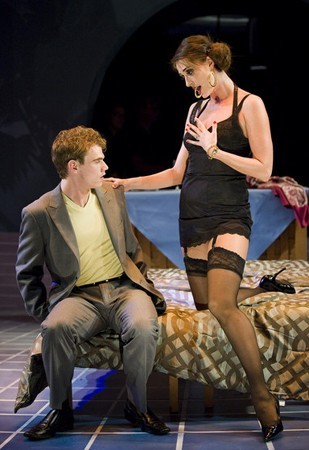 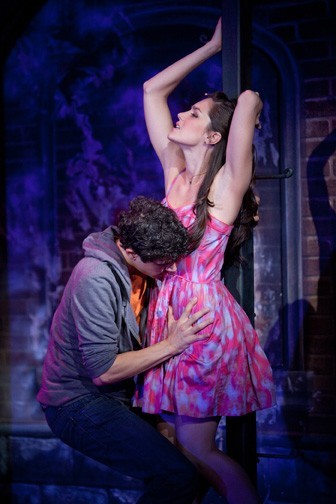 The Last Goodbye at WTF was a red hot rock version of Romeo and Juliet. 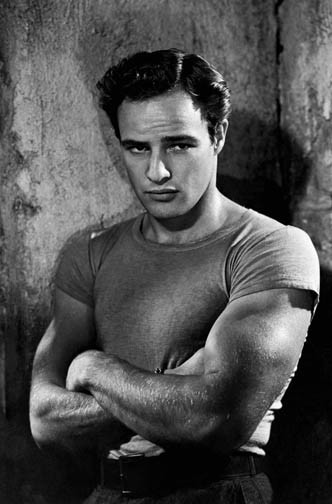 A Suffolk student didn’t dig Brando in Streetcar Named Desire because it was shot in black and white. 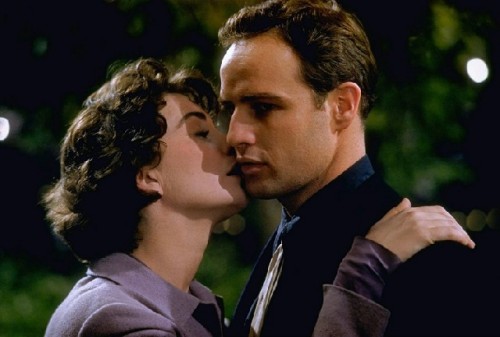 Brando in Guys and Dolls, the musical is selling out this summer at Barrington Stage.

Charles Giuliano How did your background in marketing and PR influence the more recent evolution to critic?

Larry Murray It means I know the arts from both inside and outside. If nothing else, I have attended thousands of performances of every discipline over the years, though even this is never enough to really keep up with everything that is happening.

Being a critic, it helps to have experienced previous performances to measure new productions by. It allows one to see the innovations and insights that each artist brings to their craft.  In theatre, music and dance there is sometimes a tendency to freeze certain elements into a work which means that all Waiting for Godot's are bleak, all Swan Lake's icy white, and the perfect Beethoven symphony runs exactly so many minutes.  I love it when these works are done with religious authenticity but can also be delighted when artists challenge the status quo.

I am a critic because I have seen enough to know instinctively when something works or doesn't. Even so, as an observer, I know that not everyone sees the same thing through their set of life lenses. So a critic's response is just one person's opinion. Even if you don't agree with mine, I hope some of what I write at least expands your own appreciation of a performance, or explains a little of why it did not work.

CG What was involved in the transition from a marketer and publicist into a critic?

LM Mostly putting into words what I had been thinking all along, though in making the transition I had a lot to learn.  That is why writing for Berkshire Fine Arts and having you as an editor-colleague was so helpful. Your challenge to leave the personal pronoun out was tough, at first, but it made me appreciate the journalistic style of writing. I am always there, but I usually avoid calling attention to myself. The story is not about me, but the performance or artist I am writing about.  Perhaps this is covered on the first day of journalism class, (is it?) but never having taken one, I had no clue.

CG Early on I recall gently pointing out to you that you had said “I” or “Me” at least 25 times in a review. I tried to convey that the review was your voice. The reader assumes that and we don’t have to remind them. There are times when it is appropriate to introduce yourself into the story when there is a specific point or reference to make. Used sparingly it can be effective. Of course the New Journalism and Gonzo Journalism are about making yourself not only a part of the story, but, indeed the central character. As you know from time to time I like to be total gonzo.

LM The other challenge was when you suggested writing a review without revealing the plot line, which makes writing a report very easy. You did that at the Boston Herald didn't you? When you were film critic? I learned on the fly, and having your critiques were perhaps the best thing about writing for Berkshire Fine Arts.

CG I recall telling you about a time when I was a film critic for a small weekly. As a discipline I decided that, for an entire year, I would write about films but never discuss or reveal the plot. It proved to be a great challenge and learning experience. That forced me to look at films and find other things to write about. I like to think it made it more interesting for me as well as the reader. Plot driven reviews are stupid and boring. So amateurish. Yesterday I read a piece by a young lifestyle writer in the Eagle. It was so silly and self indulgent all me, me, me. On the other hand I read Eagle stories by my friend, Clarence Fanto, and always marvel at how well crafted they are. You can really see the difference between a rookie and a veteran.

The problem is that too many young writers are full of themselves. They want to be personalities and celebrities but without any life experience. There is no nuance in the prose. I was impressed that you were willing to listen and learn. I recall struggling with you to be more of a critic and less of a publicist. You have a hard time writing a slice and dice when it is deserved. Of course those are often the most fun reviews to read.

You were one of the few last summer with something nice to say about that dreadful musical Pool Boy at Barrington Stage. Even though an actress went topless I was bored to tears. A flash of flesh wasn’t enough to hold our attention. What a really stupid show.

LM I find that limiting myself to just being a critic is not what I want to do. I am still an advocate for the arts. I want people to enjoy, to become engaged with the arts, even if it means they get into the fray with me. That gives both of us a bit of an edge sometimes. Some publicists see us as simply a way to get their releases into print. I think we both see beyond the boiler plate, and ask the hard questions that other Berkshire media tend to gloss over. It has to be our journalistic instincts asserting themselves.

CG We don't always have positive responses to every show we see. Has there been conflict for you in terms of becoming more critical?

LM My problem comes in separating my personal emotional reaction from more objective, dispassionate observations. Like most people there are performances and genres which I enjoy more than others. I am very partial to comedy and well done farce, but not slapstick. I appreciate Groucho Marx more than the Three Stooges. I also share the public's fondness for well done musicals, though I have never been able to sit through a full performance of Cats. I left both the New York and London productions at intermission, happy to be back in the fresh air. I found nothing redeeming about that show. In fact, if Barrington Stage or Williamstown did it, I would likely not review it knowing how strong my negativity is about it. It just wouldn't be a very good review. Even objectively I find it has serious problems. Although audiences loved it and it ran forever.

CG Here we differ. I saw Cats in London and was bored to tears. But I don’t think you can beg off covering a show just because you have a predisposition. Well, yes and no. I didn’t rush to see the Music Man at the Colonial. But that’s a road show. If Barrington or Williamstown did it then I would of course cover it. We see and cover every WTF show. When you were writing for BFA we split the theatres. But last summer I tried to see most of the shows by the four major companies. Now and then there were conflicts. But I feel the readers expect that coverage. They come to know your taste. There was good box office for Pool Boy at Barrington Stage which you argued was fresh and inventive. Most of us trashed it.

Clearly the public just loves musicals. Last summer two new musicals Pool Boy and The Last Goodbye at Williamstown Theatre Festival had strong and enthusiastic audiences. For both shows the reviews were mixed. But audiences flocked to them. Barrington Stage has such a strong advance sale for Guys and Dolls they have already added an extra week. The audience is not waiting for our reviews so perhaps they don’t really matter.

LM You too avoid certain events and shows because you know they just don't make the cut in terms of interest. I think where there is a personal reluctance on my part that colors what is written no matter how hard you try to hide it.

As you know, I have difficulty with much of Shakespeare, and it has more to do with me, than with The Bard. Being the sort of person who likes to be prepared for something, Shakespeare is a challenge. He uses so many phrases and words that are no longer in use that, for me, it is like listening to a heavy accent and only getting half the words. The few works of his which I have spent the time deciphering are fine. I can handle Midsummer Night's Dream or Romeo and Juliet.

CG Those are among his less challenging works. Although last summer WTF mounted the terrific rock musical The Last Goodbye, based on Romeo and Juliet. Most productions with juvenile leads are just tedious. Goodnight sweet prince. Yeah, right. A great actor like John Douglas Thomas can bring the Bard’s prose to life. If you see Shakespeare done well there is nothing more compelling.

In high school and college I read a number of Shakespeare plays. One of my best college courses was a semester of Ancient Greek literature with a wonderful professor, Thalia Howe. She was the wife of Irving Howe. She instilled in us a real passion for Homer and Greek theatre. We studied Aristotle’s Poetics and Theory of the Fine Arts. It has the rules for the elements of tragedy based on his analysis of Oedipus Rex. It is the template for all drama. I have found it essential to writing theatre criticism.

At Suffolk I had students study Aristotle and we saw videos of Streetcar Named Desire and Cat on a Hot Tin Roof. They had to apply Aristotle’s rules and write papers on those films. We read Conrad’s Heart of Darkness before we saw Apocalypse Now. They were assigned to compare and contrast the novel with the film. So perhaps my approach to being a critic is really very academic.

LM How did the students respond to great films like Streetcar Named Desire.

CG. Kids. After Streetcar I asked them what they thought. A student didn’t like it. When I asked why he responded “It’s in black and white.” Another student told me that Aristotle and Brando were a revelation for her. It gave her a new way of looking at drama.