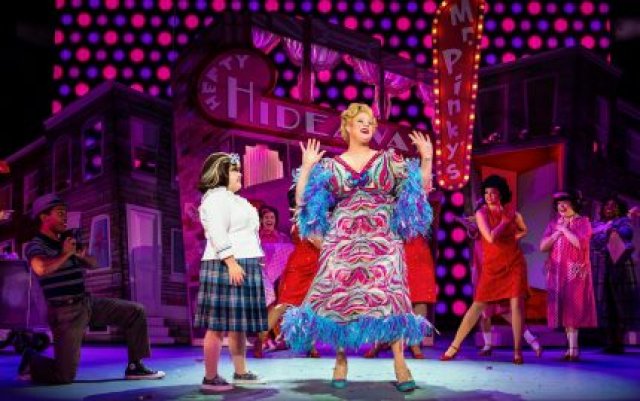 Ever since Niki Metcalf witnessed the original 2002 Broadway production of the hit musical comedy, Hairspray, the young New York-based performer has wanted to tackle the leading role of Tracy Turnblad.

Her dream has finally come true. She is starring – and excelling — as Turnblad in an new, energetic, non-Equity national touring production. It is visiting more than 60 cities and is expected to run for multiple seasons.

The production, which achieves mostly positive results, was expected to finish its six-day Miami run on Sunday before heading north. However, due to breakthrough positive COVID cases within the company, the production cancelled its remaining performances in Miami, according to the Adrienne Arsht Center for the Performing Arts of Miami-Dade County’s website.

Metcalf leads a cast that also includes Andrew Levitt. You might know him as Nina West from RuPaul’s Drag Race. Levitt plays Tracy’s mother, Edna. Both performers shine in an energetic production that features some overacting. True, for the reviewed performance, a few understudies performed. However, just because a performer is an understudy hardly means that his or her performance will be poor.

For instance, during the reviewed performance, understudy Renee Reid portrayed Motormouth Maybelle. And her performance was among the strongest in the cast. Reid infused Motormouth, the Guest DJ on the Corny Collins Negro Day Show, with a quiet dignity and conviction. Reid made ever word sound as though she were saying or singing it for the first time.

Meanwhile, Metcalf, who is not an understudy, brings a sunny enthusiasm and an almost unrestrained cheerfulness to Tracy. Her bright, wide smile is contagious. As a result, we fall in love with Metcalf’s bubbly, determined Tracy. And, to her credit, Metcalf equally succeeds at conveying Tracy’s dejection and emotional pain when things do not work out for her. But Metcalf’s Tracy does not resort to self-pity.

Hairspray, based on John Waters’ 1988 comedy/musical movie with the same title, takes place in the early 1960s in Baltimore. This is in the midst of the Civil Rights Movement.

Tracy is a plump, upbeat teenager with big hair who dreams about dancing on the Corny Collins Show. It is a fictional teen dance show on Baltimore’s WYZT/WZZT Network. Well, Tracy’s dream comes true – just as Metcalf’s dream of playing Tracy came true.

Also, Tracy wishes to win over the show’s teen heartthrob. Yet another goal of hers is to integrate the show, so that Black and White youngsters can dance together. Before Tracy changes things, the show reserves the last Tuesday of each month as “Negro Day.”

As is true with all quality stories, the protagonist faces conflict. Specifically,  Tracy must get past ambitious and obnoxious teen queen dancer, Amber and her overbearing mother, Velma. Both are racists, conceited, and fiercely proud. And Velma, the story’s main antagonist, produces the Corny Collins Show.

Certainly, with racial tension and violence gripping 21st century America, Hairspray is timely. For instance, it makes us consider not only how far we have come since the Civil Rights Movement to ensure true equality, but how far we have to go to achieve that. And, sadly, the show makes us ponder how far we have regressed.

At its core, Hairspray is about acceptance and inclusion, as well as rejection and exclusion, especially when it comes to race and outsiders.

Ultimately, Hairspray leaves us with a positive, encouraging message. Specifically, we can each do our part to help bring about change. Certainly, Tracy does her part. And she has help in the form of Motormouth Maybelle, and her parents, Edna and Wilbur.

Edna, traditionally played by a man in women’s clothing, is a working housewife. She has lost her confidence and dream to be a plus-size clothing designer.

In this touring production, Levitt injects Edna with modesty and a loving personality. Therefore, you feel for her when Edna feels down and dejected. Leavitt’s Edna might feel disappointed, but she does not pity herself.

Meanwhile, Christopher Swan shines as the simpleminded yet happy Wilburn Turnblad. The performer convincingly imbues the character with a loving, cheerful personality. In particular, Wilbur’s love for his daughter and wife clearly come across.

Swan and Levitt are particularly touching and convincing as lovebirds during the song “(You’re) Timeless to Me.”

Turning to the show’s villains, understudy Emmanuelle Zeesman overacts as Velma Von Tussel. She cackles like the Wicked Witch of the West, and seems to beg for laughs rather than earn them. Also, Greg Kalafatas overdoes it as the principal of the school which Tracy attends. He sounds like a loud cartoon character or someone from the Land of Oz.

The performers generally possess expressive singing voices. A robust-sounding live orchestra accompanies them, but sometimes drowns out the performers.

Hairspray won eight Tony Awards, including one for Best Musical, in 2003. In addition to the show’s important themes, its strengths include tuneful 1960s-style dance music and “downtown” rhythm and blues songs by Marc Shaiman and Scott Wittman and its humorous and touching book by Mark O’Donnell and Thomas Meehan.

It is easy to root for “outsiders” and “underdogs,” especially if they prove to be likable, driven individuals. Hairspray boasts a handful of such people. Therefore, it is easy to cheer when they come out on top.

The new non-equity touring production of Hairspray might be coming to a city near you. For information about showtimes and ticket prices, go to hairspraytour.com.