The Merry Widow at the Metropolitan Opera 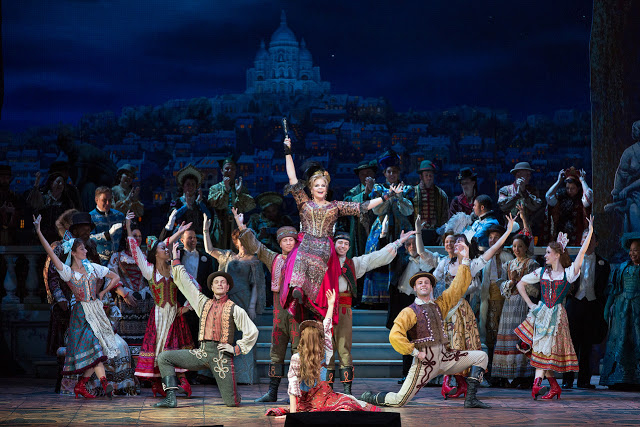 Susan Graham in The Merry Widow
When the Peter Gelb era at the Metropolitan Opera is examined in posterity, the recent renaissance of operetta on the stage of that institution may rank among the general manager's more questionable endeavors. This season, the company is reviving its 2014 staging of Franz Lehár's The Merry Widow in its awkward English translation by house scribe Jeremy Sams. The saving grace of this revival is that it is a vehicle for Susan Graham, in her only role at the Met this season.
Graham is the second singer to play Hanna Glawari in this production. In 2015, she followed her friend Renée Fleming after the initial run (and got better reviews.) On Tuesday night, about halfway through this current run, she played the part with glamour, abandon and a sense of playfulness that is endemic to her art and does much to energize this show. Indeed it was only with her entrance that the evening came alive. The Act II "Vilja" aria was sung with the same attention to detail that makes this singer great as a tragic heroine or in a recital of French chanson, the first genuine vocal accomplishment of the night.

As the comic business of the show creaked into gear, Graham stayed game. Whether engaging in an attempted high kick with her co-star Paul Groves, climbing atop a brace of dancers or sweeping majestically down the high, steep stairs of Maxim's in the third act, she was the anchor of the entire endeavour. Her voice was in good condition on Tuesday night too, and, despite the limitations of Lehar's lightweight material, she occasionally had the opportunity to sing out. She was every inch the grand lady the final scene, in her career equivalent of the Marschallin's grand entrance.

Paul Groves has long been an onstage foil to Graham, whether angling for her soul in La Damnation de Faust or laying on her sacrificial altar in Gluck's Iphegenie en Tauride. Here, he had a lot less to work with as Count Danilo, the callow bordello fellow who'd rather party at Maxim's than try to win the widow's hand. Groves is a tenor of some force but he struggled here, wrestling with Jeremy Sams' translated rhyme couplets and lacking presence or vocal force. That was most apparent in the polka-like ensemble that rings down the curtain on the long second act.

The supporting players were better. Soprano Andriana Churchman kicked up her heels as Valencienne, the neglected wife whose life long ambition to dance as a Maxim's grisette was realized in the third act. Her Act II ensemble with Graham had some of the best singing of the night. Veteran baritone Thomas Allen was a vigorous and very funny Baron Zeta, and is a better operetta actor than most of the cast. Tenor Taylor Stayton brought a bright and rising tone to the part of Camille, the Baron's rival for Valencienne and the character who sets the show's subplot into motion.

The small parts in Widow are like the bits of a watch: you're not sure what they are or what they do while you watch the first act but they are all essential to the work running smoothly. As the colorless comic rivals Cascada and St. Brioche, Jeff Mattsey and Victor Ryan Robertson staged a mock duel in the second act that was one of the evening's funniest moments. Less compelling: the obligatory-seeming and omnipresent fey act of Carson Elrod as Njegus. In this day and age, his mannerisms seemed like a throwback to much more unpleasant times. Actor Jason Simon doesn't have much to do as the Maitre'd of Maxim's but he makes the most of his brief lines.

One wishes though that all this energy would be put to a nobler cause than this tawdry little operetta. Indeed, it could be argued that Widow remains a half-built folly much like the little gazebo in its second act. It is a glorious waste of company resources in the pursuit of Broadway-style box-office gold. Susan Stroman (The Producers) offers an engaging series of thoroughly traditional visuals, and the rapid transformation of Hanna's stately garden into the pleasure palace Maxim's (complete with kick-line and flying gristles) remains an astonishing technical achievement.  (Reprinted from Superconductor with permission).
Back to Front Page Section Home