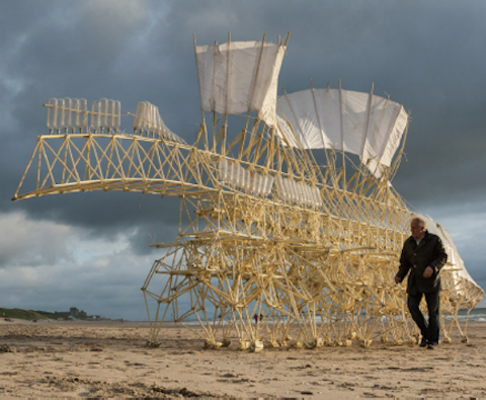 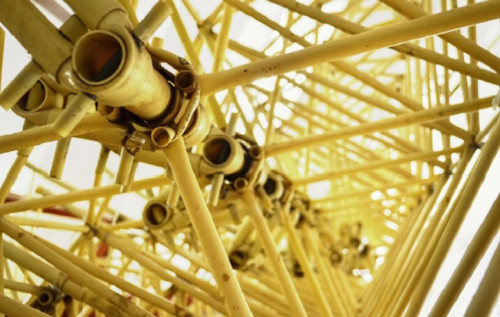 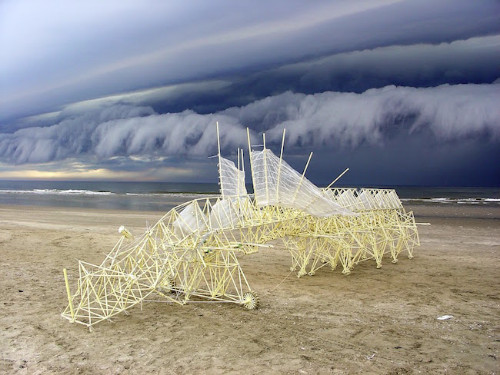 The best of public art should come with a “wow factor.” It must provoke and excite the imagination, striking chords of awed recognition in viewers. At Crane Beach in Ipswich, MA, Boston’s City Hall Plaza and Rose Kennedy Greenway, and in front of the Media Lab at MIT, thousands of people were charmed by exhilaratingly dramatic combinations of public art and technology: they were in the presence of Strandbeests, striding animal-like structures that are like fantasies come to life. Artist/scientist Jansen’s kinetic sculptures delightfully blur the conventional lines that divide art, science, and storytelling.

Roughly translated from the Flemish as “beach creatures,” these gigantic multi-legged hybrids are insect-like (huge mutated centipedes or millipedes) and move along the ground in realistic yet dreamlike ways. They can be propelled by the wind or pushed/pulled by a human. To my eyes Strandbeests look more like gigantic arthropods than odd large mammals or reptiles: they suggest enormous fiddler crabs or a bizarre cross between a centipede and a benign headless dragon-like creature. Without strings, there is also a mega-marionette aspect to the Strandbeests.

With a degree in physics from Delft University, Theo Jansen began in 1990 to build these large mechanisms out of PVC (plastic conduit) and then fashioned them to be able to move on their own. He refers to his creations as his “animals” and, like any parent, has invented amusing stories about their lives. Like their earthly inspirations, Strandbeests have wings and fins (actually sails) to help with their locomotion. The creatures have a life cycle (about 10 months depending on weather conditions) — Jansen refers to the old specimens as “fossils.” The artist claims that the Strandbeests actually reproduce, by means of the copies made by students and other artists.

The artist first came to prominence in 1980 when he flew a “UFO” across the skies of Delft, Holland. For the past two decades, Jansen has been creating and exhibiting his eye-catching Strandbeests, showing his work in Asia and Europe. The Peabody Essex is the show’s first American venue in a tour that will move to Chicago’s Museum of Science and Industry and San Francisco’s Exploratorium.

These animated structures elegantly fuse visual art and engineering as well as form and function. Strandbeests ambulate realistically and visually vibrate as they step along: their gangly puppet legs, with their unified stride and surprising grace, evoke the rhythmic beauty of carriage horses on the move. Jansen continually strives to endow his creations with flickers of artificial intelligence. At this point, they have the ability to avoid obstacles by changing course when difficulties are detected. For example, when on an ocean shore they stop if the tide touches them and then pivot away from the water.

Strandbeests have been inspired by millennia-old myths in which man, filled with godlike ambition, has dreamed of creating living forms. Since the Greeks first told the myth of Pygmalion — an artist who desired that a beautiful statue he created come to life — we have been trying to build perfect replicas of ourselves. Stories of living puppets have been around for centuries; there are legends about armies of robotlike servants. One ancient Greek engineer named Ctesibius built water-powered clocks, decorated with little figures in the shape of people, birds, and bells that seemed to move about unaided. Centuries ago skilled clockmakers — using little more than gears, springs, cams, and levers — built complex machines, known as automatons, that could mechanically mimic the actions of humans and animals to a startling degree. In the 21st century, we are getting closer to making such duplication a reality, as computer technologies evolve and artificial intelligence continues to be refined.

In 1495, Leonardo da Vinci drew plans for a mechanical knight, though it was never actually built. And in the 17th and 18th centuries, the Japanese became renowned for their exquisitely made Karakuri, dolls that were ingeniously mechanized to perform tricks (like serving tea, or writing letters) through a complex system of pulleys and weights. There is even an automaton in William Shakespeare’s The Tempest. Psychologically, we seem to make a special emotional connection with these anthropomorphic machines. For mysterious reasons, we greatly empathize with these “living” contraptions.

The large PEM exhibition was made up actual Strandbeests and component parts, environmental installations, and process descriptions. We saw how these beautiful machines have evolved, particularly how movement has been improved as elements have been refined: feet have become more flexible and adroit, leg pieces and wings have become more efficient. There is more than enough to see for both techies and art appreciators. The inner nerd in us all is fascinated by having the construction process explained through visual aids. Visitors can actually push and pull smaller Strandbeests.

Strandbeests is part of PEM's Present Tense Initiative, which has been developed by the museum’s clever and creative curator Trevor Smith. This multiyear program expands the museum’s public engagement with some of the most vibrant creators and critical minds of our time. Among projects previously presented by PEM in this initiative are Stickwork by Patrick Dougherty (2015) (Arts Fuse review) and Céleste Boursier-Mougenot‘s Freeport No.007 (2014).

The museum states that the program is responsive, reflexive, and relevant; it is dedicated to bringing together visual artists, performers, and cross-disciplinary thought leaders. The call is for these individuals to create experiences that reach beyond the staid confines of museum gallery walls. Considering the reactions of viewers to exhibits, environments, and events such as Strandbeests, PEM’s Present Tense Initiative is successfully going well outside of the box. Alas, the exhibit closed on January 3, 2016.

This article was previously published in an earlier version on Arts Fuse. It has been republished by permission.