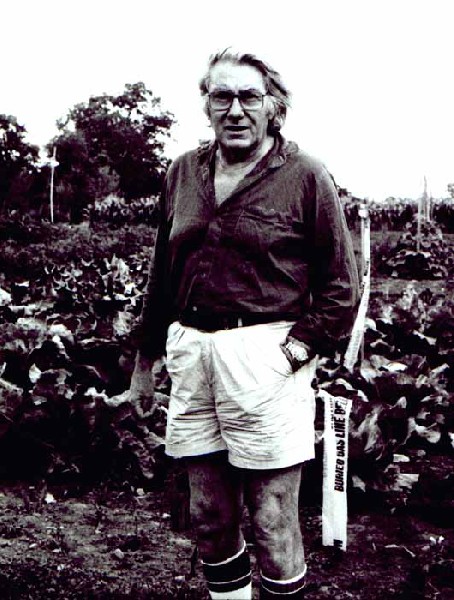 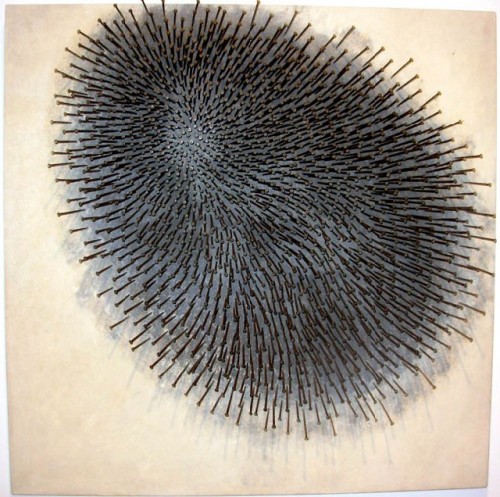 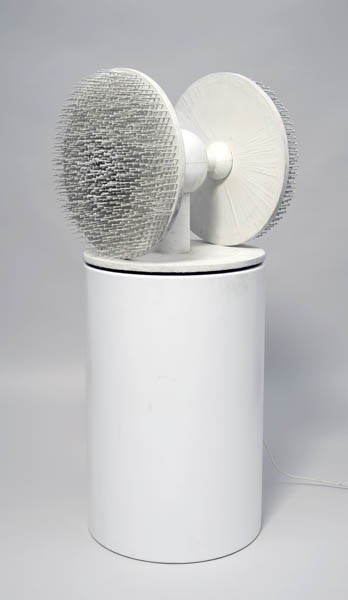 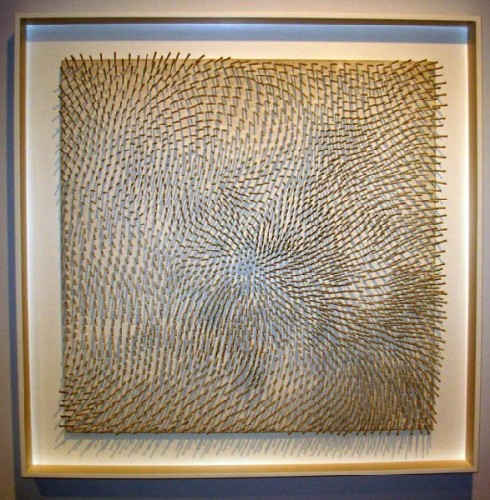 Another nail piece by Uecker. 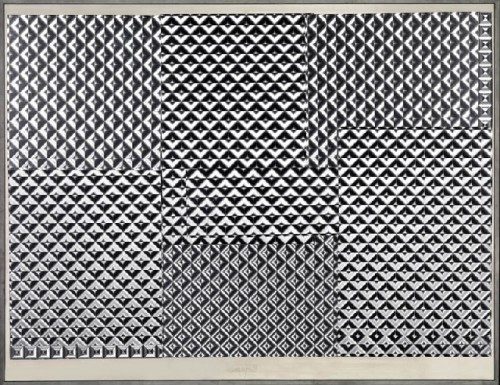 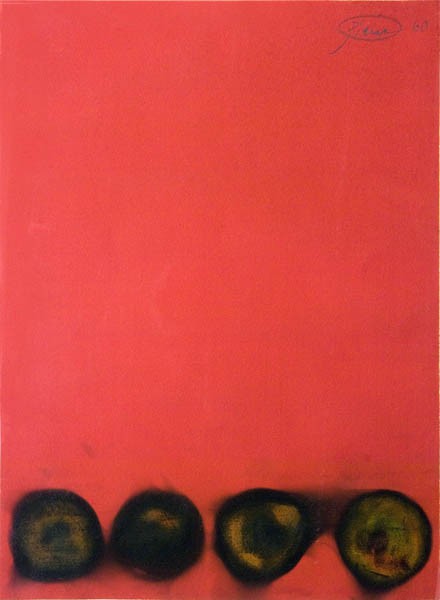 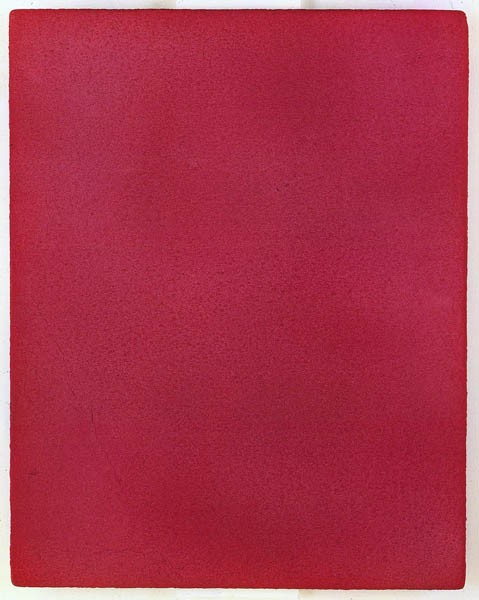 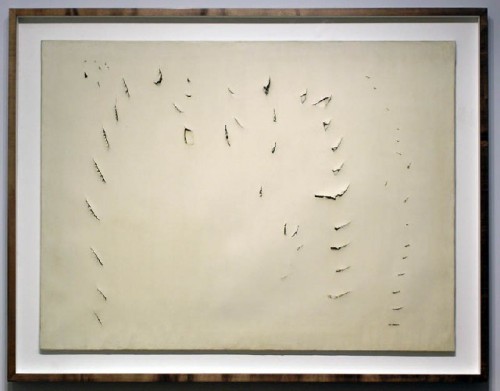 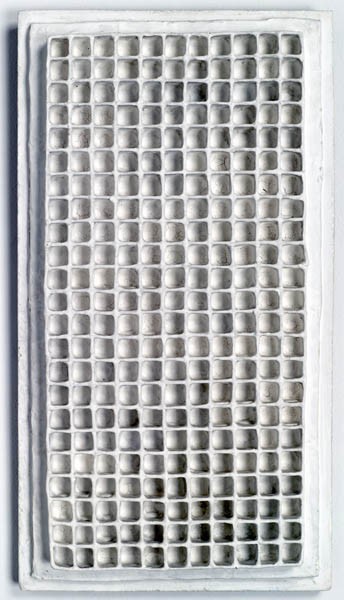 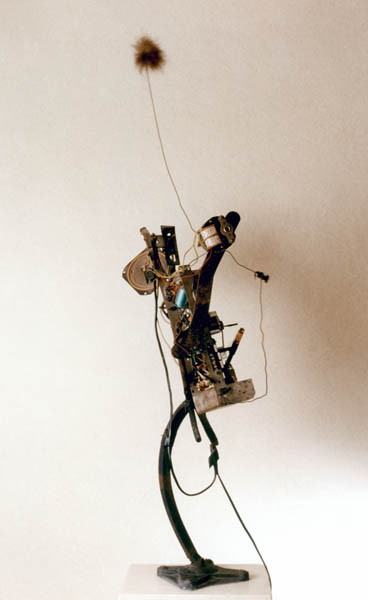 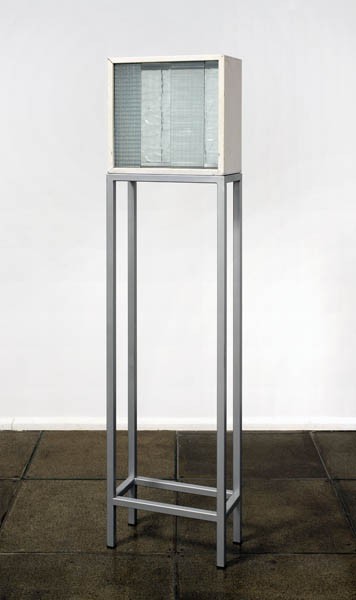 A sculpture by Vigo Cronotopo. 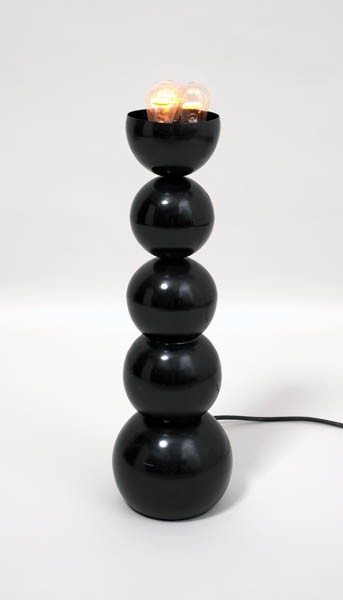 The Zero movement was founded by the German artists Otto Piene (born 1928) and Heinz Mack (born 1931) in 1957. It started casually with a series of one evening exhibitions that combined the presentation and vernissage often in the studios of artists. Since most people come to openings and relatively few later appear during posted gallery hours, particularly for avant-garde projects, it made sense to focus and conserve energy while maximizing impact. Work always seems more exciting in a crowded room with booze and snacks. In 1961 Gunther Uecker (born 1930) joined the group.

"From the beginning we looked upon the term (Zero) not as an expression of nihilism- or as a Dada like gag, but as a word indicating a zone of silence and of pure possibilities for a new beginning as the count down when rockets take off- Zero is the incommensurable zone in which the old state turns into the new." Piene, 1964. There were often manifestos written in multiple languages by artists and curators for projects such as "Zero 1" (1958), "Zero 2" (1958) and "Zero 3" (1961).

From small and experimental beginnings, just two, then three artists, the Zero movement snowballed into an international movement which, by the calculations of Piene, included 133 artists who participated in numerous Zero exhibitions and projects.. Based on the interests and travels of the founders the loosely defined Zero concept interacted with individuals, clusters, and movements of artists in Italy, France, the Netherlands, Belgium and Switzerland. Their influence and contacts reached as far as Japan.  In Paris they met Yves Klein (1928-1962) and exchanged works and ideas during similar meetings with Piero Manzoni (1933-1963) in Italy.

This process of networking and collaboration would inform the career of Piene. Mostly through my wife, Astrid Hiemer, who worked with him for a decade at the Center for Advanced Visual Studies at MIT, I got to know Otto. This led to a heightened interest in art, science and technology which was the focus of the landmark program of CAVS.

Piene initiated a mandate to bring Zero to the United States. In 1964  he was a visiting professor at the University of Pennsylvania.He was the first fellow of CAVS from 1968-1971. In 1972 he became a Professor of Environmental Studies and in 1974 he took over from the founding director of the Center, Gyorgy Kepes, and held the position until 1994.

While organizing the archives of CAVS a few years ago, and editing a yet to be published, multi language book of essays about Piene, Astrid realized that she had worked with Otto on some 100 CAVS projects. One of which was the seminal "Centerbeam" a collaboration of 22 artists. The kinetic, performing group work was presented at documenta 6 in Kessel, Germany (1977) and on the National Mall in Washington, D.C. in 1978. Piene arranged the German pavilion of the Venice Biennale in 1967 and 1971. In 1985 he showed at the Sao Paulo Biennial. For the closing ceremony of the 1972 Summer Olympics in Munich he created the sky art work "Olympic Rainbow,"

At his country studio/ farm in Groton, Mass. we examined the special pit where Piene creates his signature fire paintings. Yves Klein worked in a similar manner. It has been a pleasure to participate in his inflatable "sky" works including the launch of a cello (fabricated by John Powell) in tribute to the late Charlotte Morman, a former CAVS fellow, and frequent collaborator with Nam June Paik, who was a visiting artist at the Center..

Under the leadership and inspiration of Piene I came to view the circle of CAVS fellows as magicians, tinkerers and merry pranksters. It is quite logical that MIT became a locus for that process of art making. In particular one is amazed at the stamina and energy of Piene who regularly commutes between studios in Massachusetts and DÃ¼sseldorf. We are frequently updated on his projects and exhibitions. Much of this activity occurs in Europe where Zero is better known and celebrated than in the States.

It was with particular insight that we appreciated the rare, museum level exhibition organized by David Leiber, director of Sperone Westwater, and Mattjis Visser, the founding director of the Zero Foundation. From 133 Zero participants the gallery focused on 21 artists. This provided a capsule or thumbnail sketch of what one hopes will eventually emerge as a major project for an American museum. This is work that deserves to be shown in depth. It is also fair to say that other than a handful of artists  the majority of this work was unfamiliar to the New York art world.

Even in a limited sample, however, one sensed a commonality of what comprised a Zero sensibility in such a diverse group of artists working with a range of materials, media and styles. Reading into the text one finds a Post War, anti romantic, spirit in approaches to non objective art making with diverse, readily acquired, inexpensive, industrial materials. It is a sensibility shared with the Italian Arte Povere movement. There is a Zero look in a wall of a number of white, 2-D works (one hesitates to say paintings) in which materials are slashed, punctured or layered.

One approach appeared to be actions and interferences. The act or process often determined the appearance. There seem to be viral interests and obsessions. For example, a lot of banging of nails, a specialty of Uecker, the fire and smoke of Piene and Klein, the tears and slashes of the Italian, Lucio Fontana (1899-1968), the kinetic influences of  Jean Tinguely. This Swiss artist inspired Piene, Uecker and others to mechanize their works. There are the collectables and found objects by Arman (1928-2005) combined to form objects and sculptures. Jan Schoonhoven (1914-1994) in the 1960s used cardboard and other common materials in a manner that anticipated the work of Tara Donovan seen recently at the ICA in Boston. The early 1960s paintings of Francois Morellet (born 1926) with their jumpy patterns of vibrant color relate to the Op art movement. Mack created works in two and three dimensions from etched and engraved metal, resin, and white paint. For the Sahara project (1968) he installed beam like, metal columns with reflectors in the desert evoking the shimmering effects of strong sunlight.

The stars of this show were a few of the brilliant monochromes of Klein  which were a triumph for the exhibition as they are rare and very valuable. There was also a room of the literally brilliant early light sculptures of Piene. And one had to smile and laugh at a typically witty and gonzo little sculpture by Jean Tinguely (1925-1991). Approaching the piece a motion sensor activated it as a radio. The parts of the device are sprawled out in a zany manner but still surprisingly functional as we briefly hear a broadcast, rather loudly. You tend to think it drove the gallery attendant quite mad.

In this show we are presented with the found and white washed "paintings" by the controversial Italian artist Manzoni. One work consists of a grid of dinner rolls embalmed in white paint. He had the ability to elevate the mundane to high art with Duchampian wit. Of course his signature works are the cans of his own shit. The artist will soon be seen in a retrospective at Gagosian gallery (January 25 to March 21) on 24th street in Chelsea..

This Sperone Westwater show offered a carefully curated and insightful glimpse of the Zero movement. Hopefully it will stimulate other projects. We deserve to know more about these artists who anticipated actions, conceptualism, Minimal art, Op, and unique approaches to media and materials.