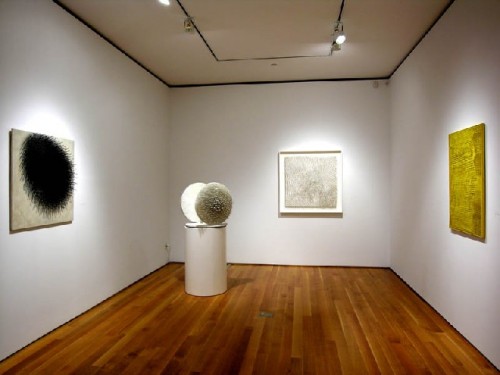 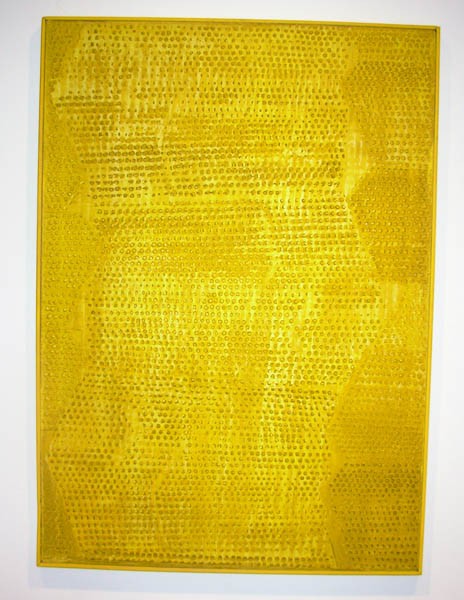 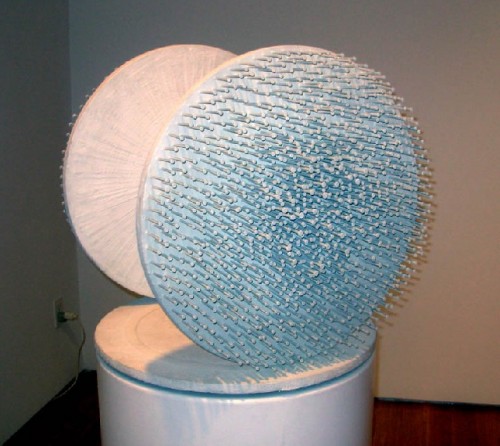 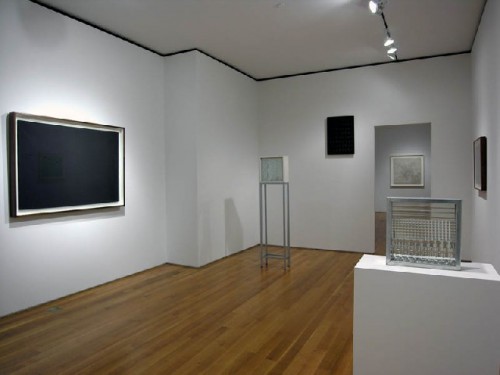 Another view of the Zero installation. 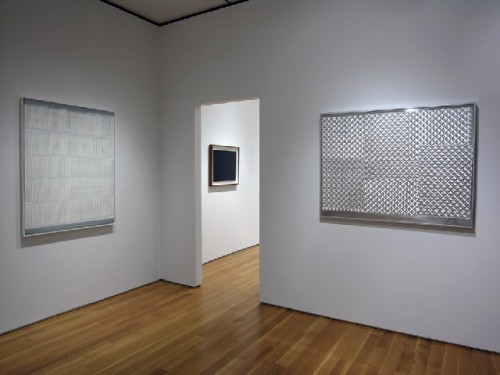 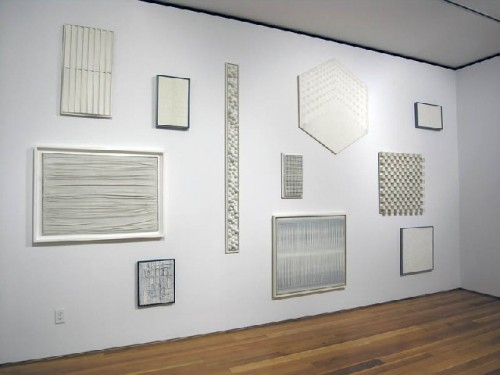 A gallery of variations of white on white. 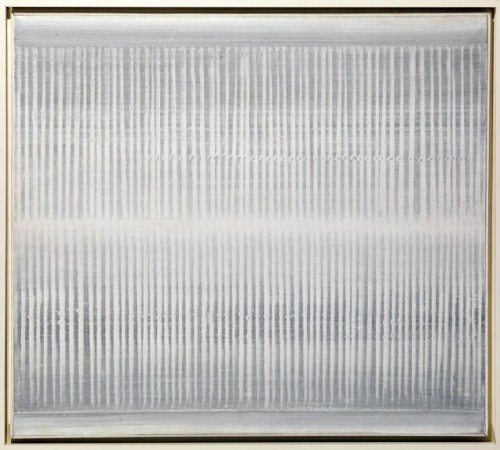 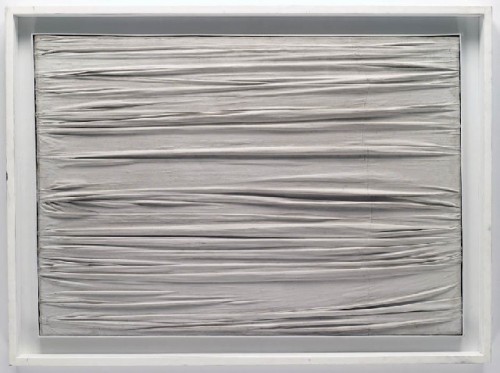 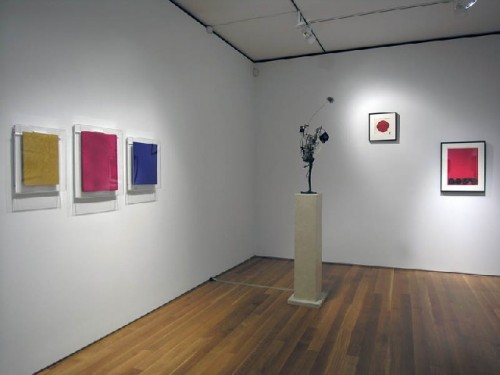 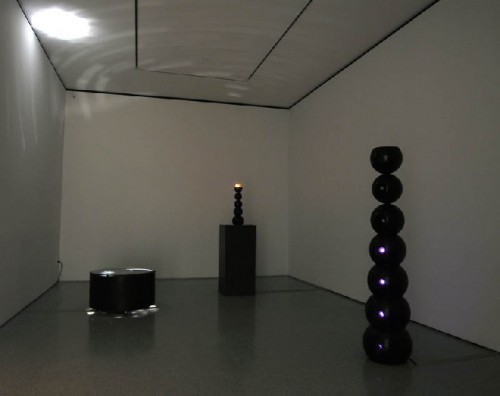 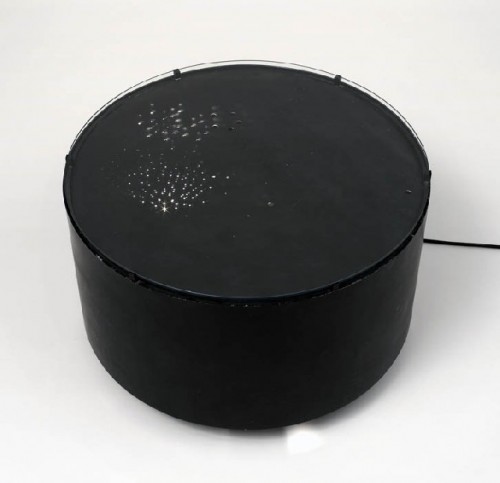 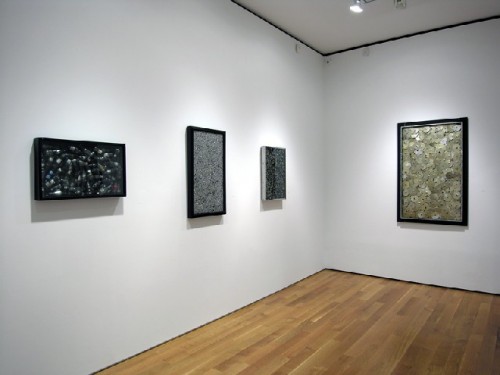 Works by the French artist Arman.

We had to see the recent Zero Exhibition in New York. In fact, I decided to make it a day's trip in the middle of December by bus, which leaves from Williamstown nearby.  It would not have been the first time that I was on an art Â– pilgrimage, lasting 12 hours, to New York.  I remember well, traveling to MoMA in the late '70 to see the Picasso retrospective. It was a great day.

We spent a glorious day in February 2005 in Central Park photographing and walking in and out and around "The Gates" (by Christo and Jeanne-Claude), in the park, and with many thousand art-hikers. Again, that was a bus trip from Boston. When Charles realized that I was serious about the day-trip to see "Group ZERO in New York," we planned a short week's journey to the City, which became a cultural feast.

Group Zero was born from activist artists, as one would word it today, through self-organized one evening exhibitions and happenings or demonstrations. A catalogue-magazine, titled "Zero" (published three times within several months in 1958 and 1961), became their first public documentation. Group Zero's meaning alludes to 'A New Beginning' and was founded in 1957 by Otto Piene and Heinz Mack in Duesseldorf, in the Rhine Region of Germany. Guenther Uecker joined them in their many activities in 1961.

Zero, had become an international movement of artists and inspired or provoked other groups to form outside of Germany. Groups and artists from Germany, The Netherlands ("Nul"), Belgium, France ("New Realism"), Italy, and Switzerland, as well as from then Yugoslavia and Japan ("Group Gutai") exhibited together in museums and galleries in their countries, in England, and the USA. Group Zero would also identify with a 'New Idealism' to be understood as an intellectual and artistic energy and relationship to science, technology, and nature Â– within and beyond their artistic expressions, and in that sense, the idea of "O" lives on.

In the late Fifties, Germany and Europe were still struggling to rebuild after WWII and working artists were also searching for new expressions: "We were all banging nails at night. Luckily, I had a sympathetic landlord at my studio. We had day jobs, so art making happened at night," Otto Piene told me once.  Canvases were lifted off the wall  - became three dimensional Â– abstract Â– intensely monochromatic Â– nailed Â– slashed  - applied smoke Â– were burnt Â– and more. Sculptures commanded dark spaces Â– for light Â– and motion.

The pivotal person, who gave me a career and a life in the arts, was Otto Piene. He hired me in 1975 as the administrator for the Center for Advanced Visual Studies (CAVS) at the Massachusetts Institute of Technology (MIT). He was the director, and my first day at work at CAVS was also the first day of ARTTRANSITION, a conference that CAVS/MIT sponsored. Almost thirty years later, when I was organizing an archive for CAVS, I counted the many projects, nationally and internationally, the Center had been involved with or organized during the 10 years of my full-time tenure there. I told Otto that the number was 100! "I can believe it," was his response.

That day we spent in Chelsea, we started on 13th Street, at the Gallery Sperone Westwater, and were greeted by Jennifer Burbank, a delightful and very helpful young woman. Otto Piene, himself, had spent several days at the gallery in preparation of the exhibition and the staff had heard many Zero stories from him of the early days. A wall, filled informally with many photos from the 'O- days,' would convey the 'Zeitgeist.' Of the more than hundred artists, who exhibited during those years,  the gallery showed works by twenty-one and represents some of the artists.

Thanks to the curator of the exhibition and director of Sperone Westwater, David Leiber, the founding director of the Zero Foundation and co-curator, Mattijs Vissen, and loans from collectors, once again, we loved seeing the following works in several spaces.

The exhibition's overall impression in pure colors: Whites, red and rose, blue, yellow, with pure or complex surfaces on paintings and sculptures would put this visitor into an almost meditative state of mind.

The first room presented the three German "Gruppe Zero" artists, Mack, Piene, Uecker, in white, yellow, aluminum color, and black.  Most works applied nails in different ways.  Guenther Uecker's totally white sculpture, "Weisse Muehle,"("White Mill") 1964,   was made of two round wooden wheels on a turn table and  pedestal, their surfaces filled with long nails in opposite directions. They are standing erect and are continually moving forward, without reason (?) Â– unlike mill-stones or grinding stones, which are positioned horizontally  and are or were used to feed the world.

Another Uecker work, in this space is titled "Hedgehog," of 1964 and presents a black and spiky form on an otherwise white canvas, mounted on board.

The yellow untitled "Rasterbild" (grid painting), 1957/58, by Otto Piene, shows the impressions of nails or holes in the large canvas and oil paint. (Piene also produced in those years "Raster Rauch-Zeichnungen" or grid smoke-drawings, namely, nail and smoke impressions on paper.) Heinz Mack's aluminum work, "Folium Argentum," 1968, was also mounted in this room.

Three relatively small works by Yves Klein: "Yellow Â– Blue Â– and Rose Monochrome" of 1960 and 1961 presented his intensely pure color scheme. We learned that the largest painting in this group, the "Rose Monochrome" has been seldom exhibited in public. There was also an exquisite sculpture by Jean Tinguely, "Radio NWYR," circa 1962, containing one long moving part, among many transmission elements, and a short radio announcement could be heard.

Vigo Cronotopo's glass sculpture on a high, white and metal frame-like stand was exhibited with other black and white works. And in another room we saw Arman's shadow box, filled with fiat lux, light bulbs, "Accumulation Fiat Lux," 1960, as well as the accumulation piece, a large box containing many silver disks.

Of the three light sculptures, by Otto Piene, only the "Light Ballet," 1965, was active and projected into the black space its turning images. I well recall a vibrant light sculpture room at a CAVS/MIT exhibition in Cambridge in 1997, during a 30 year celebration of the Center. It was filled with Otto Piene's light sculptures and the "Light Ballet" truly important works. They are forerunners of technological sculptures and projects that would follow each decade, made by Zero artists in an attempt to apply and humanize technologies of the day.