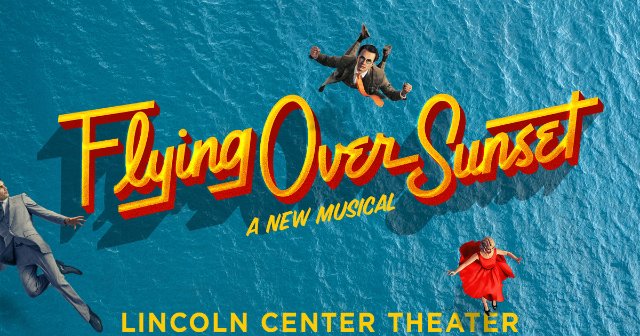 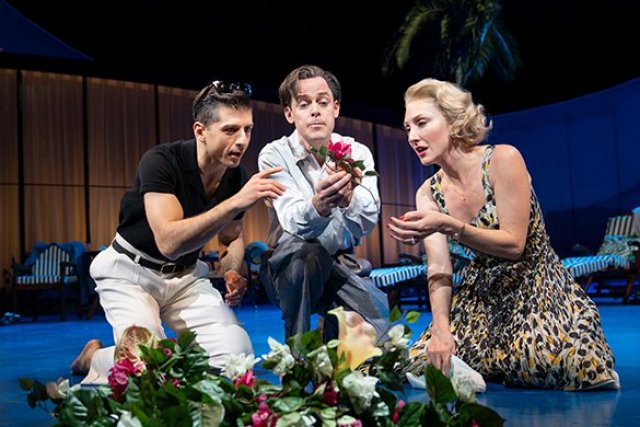 Broadway offers so few truly original musicals, that you have to applaud Lincoln Center for producing Flying Over Sunset.

It is not based on a novel, tv series, film, drama or anything else.

So what is it about? In the late ‘50s-early ‘60s, LSD (before Dr. Timothy Leary) was a trendy drug used by both psychiatrists and other to help individuals explore their past and their subconscious. Among the well-known people who experimented with the drug was actor Cary Grant, novelist Aldous Huxley and playwright/journalist/diplomat Clare Boothe Luce.

Today’s audience may only recognize Grant, but the others were influential in the period.  Huxley had written Brave New World and was writer, lecturer and TV personality on high-brow programs. Luce (then married to the publisher of Time) was a prominent Republican with a resume that included war reporting, play and screen writing, and diplomacy as a political appointee.

Authors James Lapine (book), Tom Kitt (music) and Michael Korie (lyrics) explore the experiences of these three using the drug as well as that of Gerald Heard, the British historian, lecturer and proponent of the use of trippy drugs for self-exploration and understanding.

Act 1 introduces us to the three characters in separate scenes as we learn how each has come to take the drug and their initial experiences.

Act 2 supposes that all three – with Heard providing the LSD – gather at Luce’s Malibu home and take trips simultaneously.

In each act, we see what occurs during their “trips” while under the drug; in doing so we learn more about the person and what has shaped or influenced them.

For Grant it is his upbringing as Archie Leach, born in Cockney London. his father committed his mother to a mental institution while he was a child (there is a question as to whether the mother needed it), Leach became a stilt walker, acrobat, music hall performer before creating his persona of “Cary Grant.”

In this instance we see the young Archie and his father. By the way, Grant eventually learned the truth about his mother and cared for her for the remainder of her life.

In Luce’s case, she is haunted by the death of her daughter as well as her relationship with her mother and in Huxley’s it is his marriage to Maria.

If sometimes the “trips” go on too long, especially in Act 2, that doesn’t detract from the overall enjoyment.

First, the cast is excellent. Initially I assumed that Harry Hadden-Paton would play Grant, but he actually plays Huxley. His performance is subtle and nuanced. Carmen Cusak is Luce. Since Luce was born and raised in the New York City area, I’m not sure where the southern accent came from. Tony Yazbeck is Grant and while he manages some of the mannerisms, he never quite convinced me. You don’t want an imitation, but you do want the essence and in this case some suavity was missing. Robert Sella is outstanding as Gerald Heard (and other roles), creating a fascinating man.

Yazbeck does get a terrific tap number with the young Archie Leach. Kitt and Korie have created some delightful songs including the title tune, “I Have It All,” “The Music Plays On,” “If Only I’d Known,” and “Three Englishmen.”

Kudos to Dan Moses Schreir for the sound effects, Bradley King for lighting and Beowulf Boritt for sets.

At times Lapine’s direction leaves you confused. It is only later that I fully understood the meaning of the opening staging.

Applause for a new work but I do wish they had shortened the second act.