Otello at the Zurich Opera House 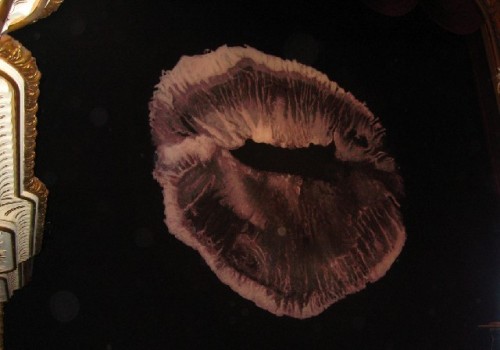 An ugly epithet hurled at Otello the black Moor inspired this symbolic presentation on the curtain of the set. 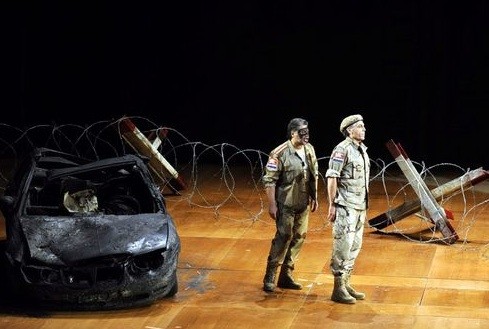 Jose Cura as Otello and Thomas Hampson as Iago faced off in Zurich.

Jose Cura, one of opera’s bad boys, played an Otello who is magnificently manly but finally demolished by jealousy. 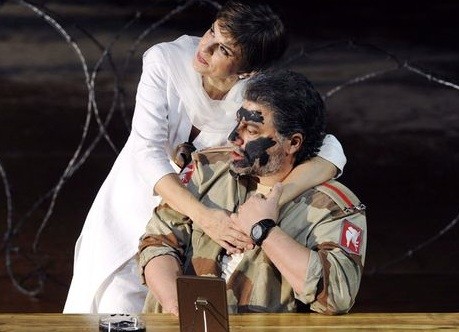 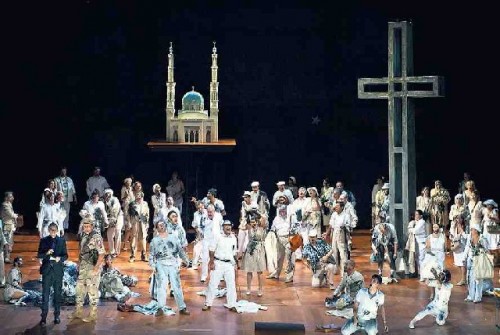 Iago, Rodrigo and the chorus as the opera opens. 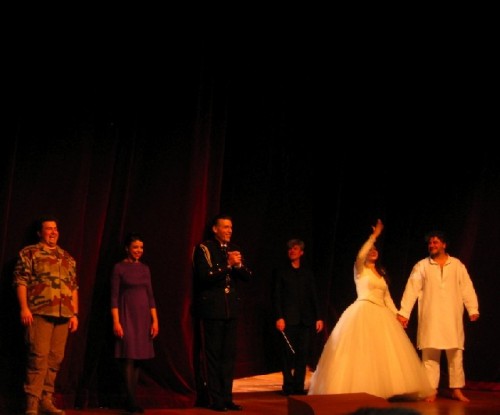 Verdi’s Otello is one of the greatest operas by one of the greatest composers and offers an opportunity for all the passion and beauty of the form to be put on display.  The current performance at the Opernhaus in Zurich gives Otello its due.  This is not Otello re-interpreted, but rather the original story as conceived by Verdi and Boito set in the contemporary world.  The story is for all time.  It does not feel bent out of shape in any way.

The predator, Iago, is sung by Thomas Hampson, who has never sounded better.  In the Zurich Opera, Hampson is at home and delivers a riveting performance of the coldly calculating and ambitious officer who Otello has overlooked for the position of Lieutenant.  Hampson captures perfectly the notion that Iago is cold and has no real motive for his set up of Otello’s jealousy.  He dares to show this very evil side, the horror of Iago’s character. Hampson can also ham up ugly, humorous touches with aplomb.  His sina qua non baritone fits perfectly into the luxurious Verdi lines.

Barbara Frittoli’s easy sex appeal helps us understand why men in love wih Desdemona, and how she can drive Otello around the bend.  After some initial fluttering, she settled into a lovely middle range.  While she strains at the top where her tone is untidy, the lower registers capture lush, velvet Verdi lines to perfection.  When Desdemona begs for Cassio’s restoration, she is noble.  She displays a heartrending devotion which Otello simply cannot recognize, blinded by his ferocious jealousy.

Bad boys are Jose Cura’s specialty.  In the title role, he had a good night, extending himself to show not only Otello’s lack of confidence as an outsider, but also his manly desires and competence as a general.   He was at once raw and tender, seething inside as his tolerance for apparent infidelity evaporates.   Using dynamic range to capture both intimate moments and public ones where he is leader, Cura gave a detailed portrait of the man who never feels comfortable at the center of Venetian society.  He is a charismatic Otello.

Other cast members were uniformly excellent and included up and coming Stephan Pop as Cassio and Benjamin Bernheim as Rodrigo.  Massimo Zanetti stepped in at the last moment to conduct for Daniele Gatti.  He gave a brisk and beautiful performance of this exceptional score.  Like Cura, dynamic range was used to reveal the emotional story arc from moment to moment.

Inviting staging and set design fills the mind and eye, but does not distract from performance and story telling.  In this case, Graham Vick set the opera in the modern Middle East, bringing forward the seemingly eternal conflict between Muslims and the West.  A tank with cannon at the ready and a dilapidated car were dramatic symbols stage right.  Descending from the ceiling at appropriate times was a big billboard with warnings like ‘Attention.’   A huge statue of the ‘Lion of Venice’ descends as the Doge arrives.  A quarter moon slipped down center stage and was finally punctuated by a star.

Even when the stage was crowded it pleased.  The final scene was stripped bare, leaving a huge, barren black box.  Otello huddled into the wall, and Desdemona, in her heavily crinolined white wedding gown, both freeze during the orchestra’s final prelude.  Otello breaks into action first, turning in jealousy and guilt toward the woman he loves and must kill.

If you ever wonder if it is worth a trip to Zurich to see opera, the answer is a resounding yes.  The beauty of the house, its intimacy, and  stunning caliber of performance are particularly satisfying.   After the demise of live performance at the Metropolitan Opera which has fallen to the demands of HD broadcasts, all opera lovers will particularly appreciate Zurich productions.

For American opera goers, a coming Ariadne auf Naxos with Nina Stemme up close and personal, a new production of Die Meistersinger with Juliane Banse, Michael Vlle and Roberto Sacca, are among the awaiting temptations.  Rossini’s seldom-performed Otello with Cecilia Bartoli is also an exciting prospect.  Anja Harteros will sing Elisabetta in Don Carlos.  The list goes on and on.  What a pleasure to hear and see opera as it should be, modern and thrilling.