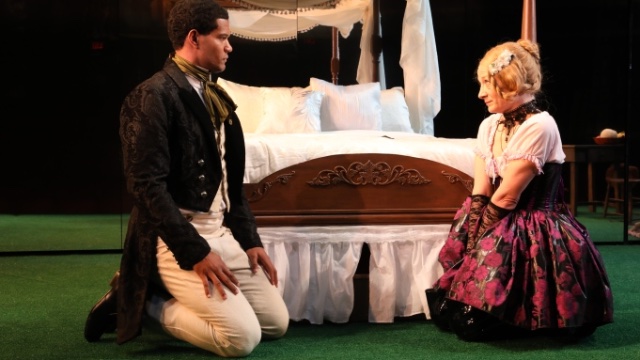 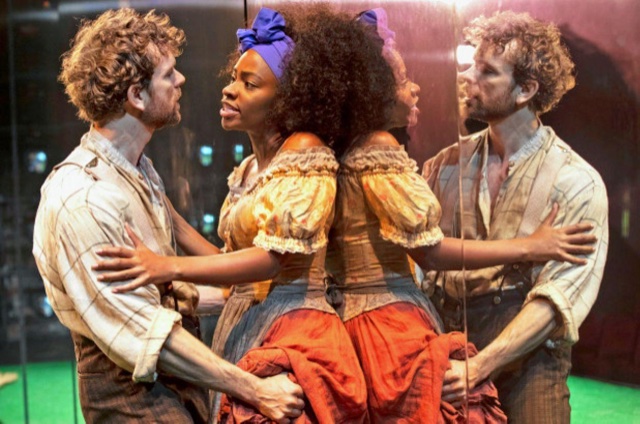 Slave Play. Can't we just get along?

Slave Play by Jeremy O. Harris, directed by Robert O'Hara, brings us abruptly into sexual fantasies played out by three interracial couples in the ante-bellum South.

Ah ha. This is not what might have happened in the South before or during Jim Crow.  No, it is the processing of feelings which will re-invigorate the Black partner’s sexual desire.  In the second Act, Processing, we get into the nitty grity of race feelings, which range wider and tougher than the first act’s insight that cantaloupe has white skin and no taste.

In the first Act, pleasure it derived by the white partner.  In the second Act, we learn that Black partners need to claim their due. The abstraction of Act I fools us.  It also transports us immediately to more general feelings about race. Harris makes interesting use of 'self as performance,' a hot button issue in contemporary philosophy.

Ante-bellum sex therapy turns out to be race therapy for everyone. A brilliant set by Clint Ramos, reflects a columned ante-bellum mansion in a thin strip slightly south of the middle. It is surrounded by reflections of us, the audience.

The three first act vignettes are particularly well supported by Co-Intimacy and Fight directors Claire Warden and Teniece Divya Johnson as well as Movement Director Bryon Easley. Dede Ayite, Music and sound design, as well as lighting by Jiyoun Chang maintained an interesting  presence that enhanced the performance. Director O'Hara provides us with a broad vision. Yet he keeps a palpable “tension in the room” and gives space for each individual's performance to be fully experienced

Sex is not a bad place to start talking about race. For many in the South, brought up by a loving Mammy until they hit puberty, a Black woman was the first love of their lives. The Mammy’s children are their best friends. Separation of races hits with adolescence to make sure forbidden love can not be acted out.

On stage, gyrating pre-twerk butts lofted high suggest attraction as they arrest attention. Beethoven will be replaced by spirituals. Bundles of hay are dumped from a wagon as sex starts between a deeply black man and an eggshell, yellow, or whatever color indentured servant.

Act II is a group session. Group leaders Tea (Challa La Tour), and Patricia (Irene Sofia Lucio) set up a verbal wall of self-help patter. A chorus of self-effacing narcissism is noteworthy for its scripting as well as its delivery.  The three couples who it turns out were working on ante-bellum sex acts in Act I,  reveal much about what is “wrong” in their respective relationships.

Jim and  Kaneisha (Paul Alexander Nolan and Antoinette Crowe-Legacy) re-enact the sexual predation of master on servant. Nolan reveals a broad range of emotional responses in both his voice and body language. Gary (Jakeem Dante Powell) and Dustin (Devin Kowaoka) remain both innocent and full of rage. Alana (Anne McNamarra) and Phillip (Jonathan Higginbotham) replay a struggle for sexual dominance.  In a somewhat misogynist twist, the white woman participant in ante-bellum therapy (McNamarra) fantasizes becoming a male dominating her partner. The Black woman (Crowe-Lehgacy) demands violent sex from her partner. What these stereotypes reveal about our social expectations is left to our imaginations.

As we tackle race yet again in the post George Floyd era, this play hits a mark. Slave Play is about so much more than sex. It is about how the races feel about each other.

Ben C Toledano, who ran for Mayor of New Orleans in 1970 and a Louisiana Senate seat in 1972, had a collection of Black art in a locked room in the center of his house. Here was housed his collection of first edition books and paintings by Black artists that had caught his eye. He loved his collection. He hid it. Yet he once hosted Ralph Ellison at a dinner at one of New Orleans most elegant restaurants, Antoine's and brought Ellison home to chat in the moonlight on his very prominent front porch. Toledano was a conservative contrarian.

Jeremy O. Harris brings this richness to his look at race. He wants to offer a deeper understanding. which may be why the play is often funny. Humor gives feelings a wider berth. The play's rawness reflects the painful moment in which we are now engaged.

Limited run is at the August Wilson Theatre in New York.  Tickets are available here.