Met Director Philippe de Montebello to Lecture at the Clark

This Week He Announced Plans to Retire After 30 Years 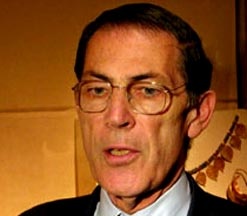 Philippe de Montebello has been the Director of the Metropolitan Museum of Art since 1977. 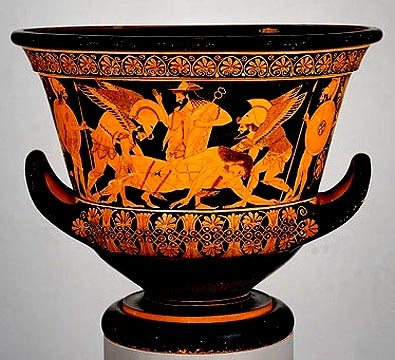 The 2500 year old Euphronios Krater is among 21 of the Met's antiquities which are being returned to Italy.

The major event of the winter season for the Sterling and Francine Clark Art Institute in Williamstown, Massachusetts will be a lecture "Museums Why Should We Care" presented on Wednesday, January 23 at 7 pm, by the director of the Metropolitan Museum of Art in New York City, Philippe de Montebello. The lecture is a part of the Director's Perspective Series which will continue on Thursday, April 17, when Michael Govan, director of the Los Angeles County Museum, will join Michael Conforti, director of the Clark, for a discussion of museum issues.

The much anticipated lecture by de Montebello, the Director of America's largest and most prestigious museum, took on special significance this week when it was reported that he plans to resign as soon as the Board can find someone to replace him. He is the eighth and longest serving director of the Met which was founded on April 13, 1870. The Museum of Fine Arts, Boston was established within a year. They were long viewed as competitors and in specific collections the MFA is second to none but under the watch of de Montebello, on every level from expansion, nearly double its overall gallery space, special exhibitions, and acquisitions the Met is without peers among North American museums.

Over the past three decades it was not unthinkable to observe that "Philippe de Montebello Is the Met." With his aristocratic bearing and mellifluous voice, particularly its Gallic intonations, de Montebello has literally guided millions of visitors through special exhibitions accompanied by the portable audio guides. In addition to the day to day operation and long term planning of the Met he has been its human presence and primary marketing asset.

His manner and style were in stark contrast and, a much needed antidote, to the colorful and often controversial razzle dazzle, decade long tenure of his predecessor, Thomas Hoving, who wrote about his time at the Met with great pizzazz in the book "Making the Mummies Dance." He certainly livened up the stodgy Met but having achieved that mandate it was the task of de Montello to restore the museum's dignity and patrician reserve without losing sight of Hoving's much needed populism.

In Hoving's memoirs he highlighted the acquisition of the 2,500 year old Euphronios Krater, arguably the greatest surviving example of Classical Greek pottery, in 1972, for a price of over one million dollars. After many years of legal negotiations de Montebello is returning the object, and twenty others from the collection, to Italian museum officials. As part of the agreement, when the works leave New York after this final weekend, the museum will in return be loaned three comparable objects to display in the Greek and Roman galleries for the next few years.

In 2002, Marion True, then curator of the Getty Museum in Malibu, California faced criminal charges in Italy because of the museum's allegedly inappropriate acquisitions. The MFA has also returned antiquites to their countries of origin. In the most notorious of all such examples, however, the British Museum holds fast to its Elgin Marbles which were looted from the Parthenon in 1801.

During the era of Imperialism and Colonialism, when the Sun Never Set on the British Empire, museums were where nations deposited stolen objects. The more outrageous the theft the greater the museum. What wasn't looted by the triumphant armies of Napoleon for the Louvre ended up in the British Museum. By contrast, the Met and MFA, found other ways to amass great collections. But de Montebello presided during a time of transition and change marking a departure from the era of the Robber Barons.

Nobody seemed more suited to the task than de Montebello. He was born in Paris in 1936 Count Guy Philippe Henri Lannes de Montebello. His great-great-great-grandfather was Jean Lannes, Duke de Montebello, and Marshal of France. His father Count Andre Roger Lannes de Montebello (1908-1986) was a portrait painter, art critic and member of the French Resistance during World War II. His mother, Germaine Wiener de Croisset (born 1913) was a descendant of the notorious Marquis de Sade. The family came to New York in 1951 to pursue a business plan to develop three-dimensional photography. While three brothers eventually returned to France Philippe became a US citizen in 1955.

The year 2007 was for de Montebello an "annus mirabilis." He presided over the opening of nine, new or renovated galleries. The enormous new Greek and Roman galleries are described as a museum within a museum. The 19th and early 20th century European painting galleries have also recently been reopened. Renovation of the American Wing started two years ago and continues.  In 1989 the museum stopped charging a separate price for special exhibitions. Last year the Met mounted 21 special exhibitions including "The Age of Rembrandt" which included the museum's entire collection of Dutch paintings of that period. It attracted a half million visitors. During his watch the museum's endowment grew from $1.36 million to $2.9 billion. Attendance grew from 3.5 million annually to 5.1 million by 2000. The period following 9/11 in 2001 proved to be devastating for tourism in New York but has retrenched gradually with 4.6 million visitors for the past year.

In announcing the decision to resign as Director, de Montebello said that "After three decades, to stay further would be to skirt decency. This has not been an easy decision-it's wrenching for me, it's been my entire life. But it's time."