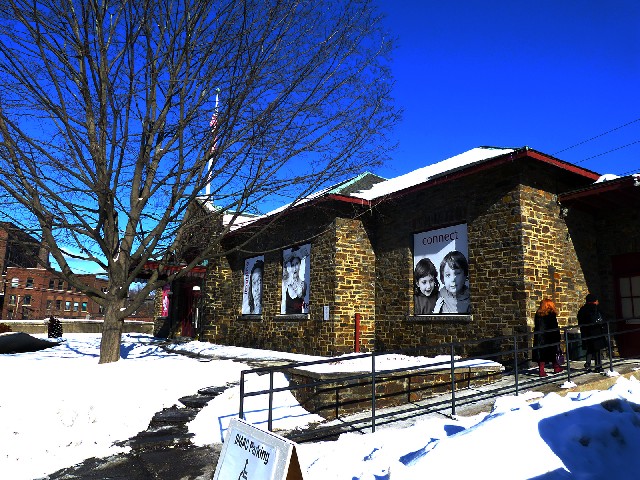 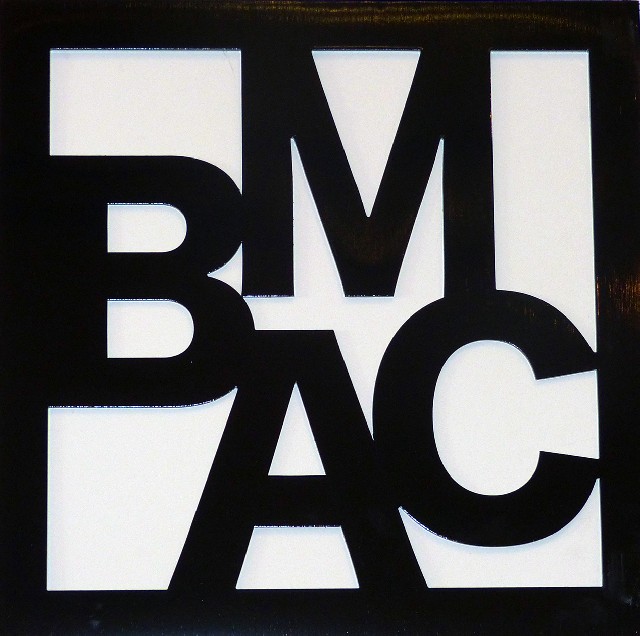 Logo for the Brattleboro Museum and Arts Center. 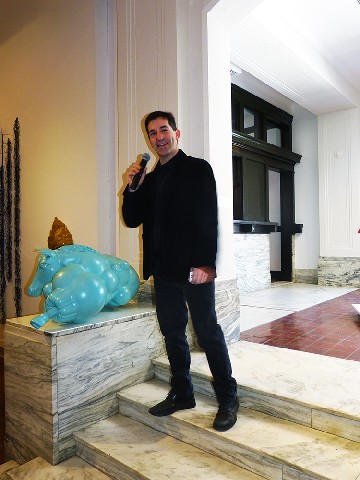 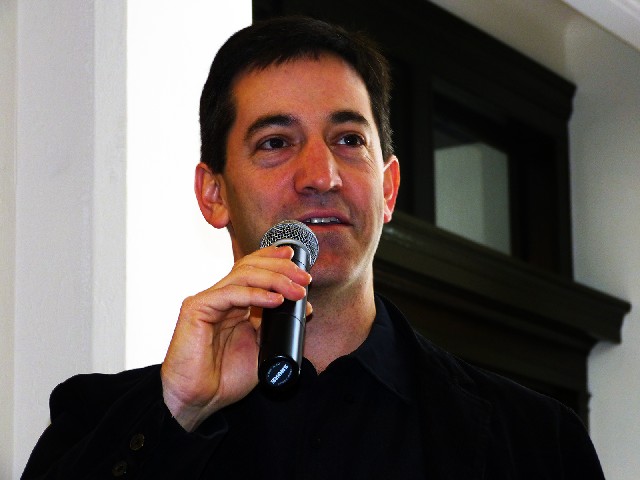 Lichtenfeld has been the museum’s director for seven years. 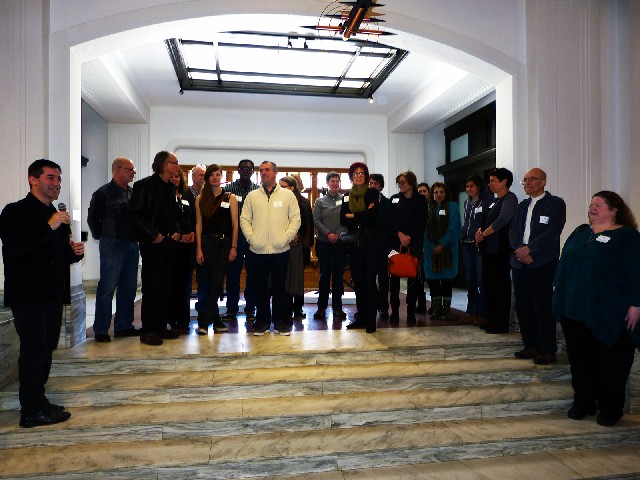 Some of the 38 artists in Open Call. 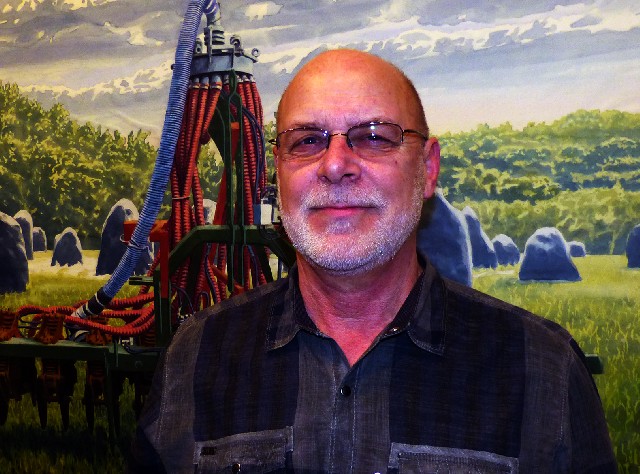 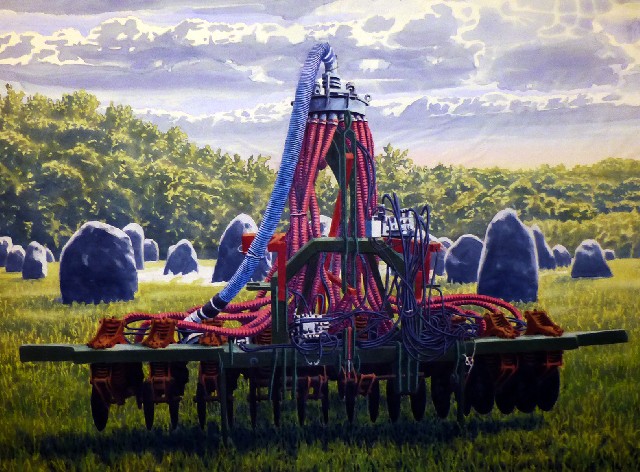 Watercolor on paper Belgian Seeder at Rock Field by Morgan. 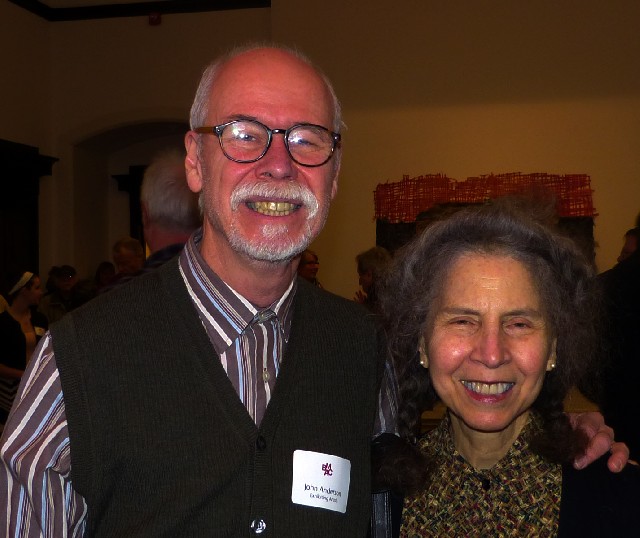 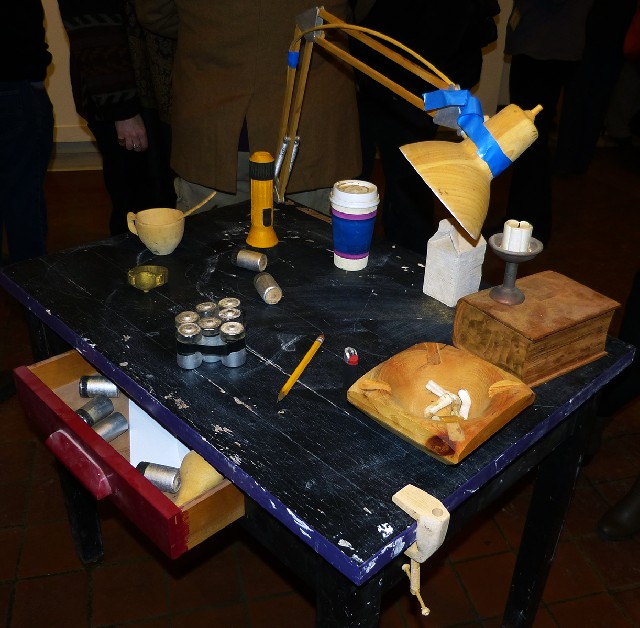 A sculpture by Anderson combining found and crafted elements. 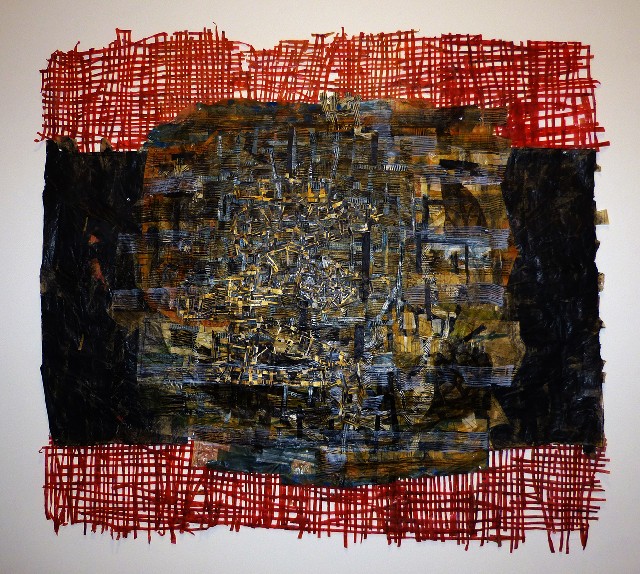 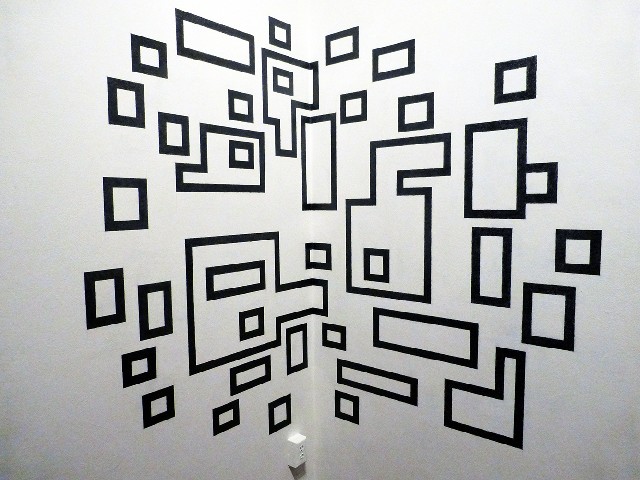 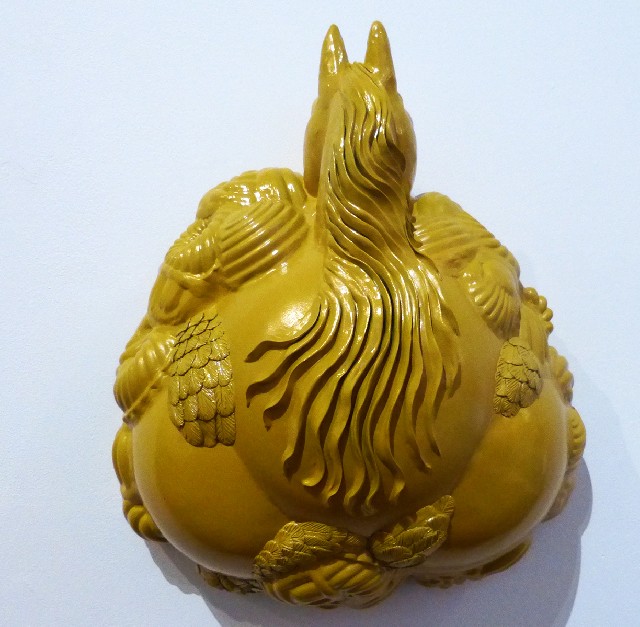 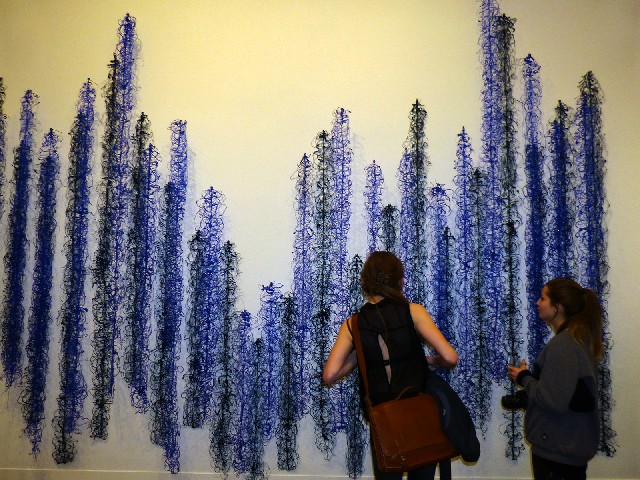 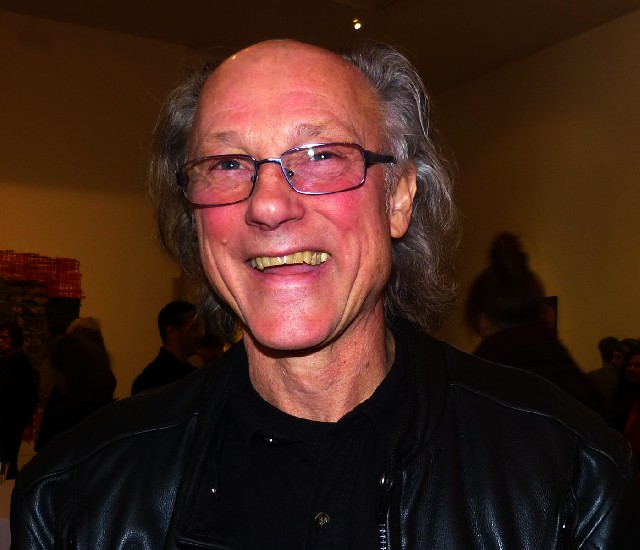 A metal and neon work by Sproat suspended above the gallery. 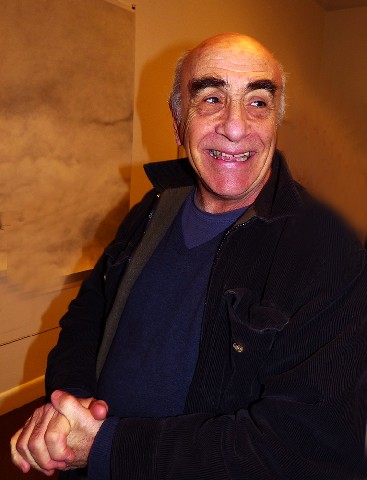 The sculptor Paul Bowen relocated from Provincetown to Vermont. 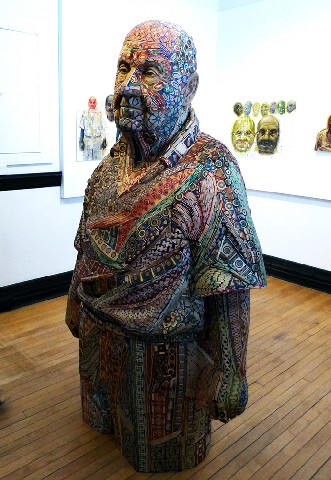 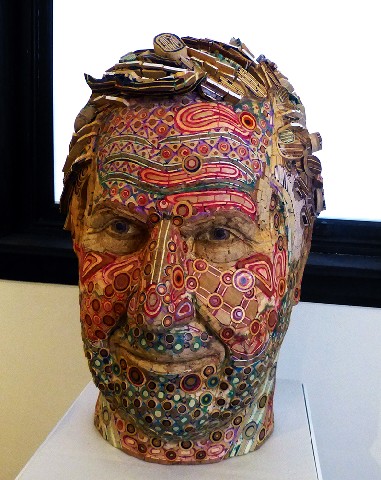 A [portrait head by Ferris.

Works on paper by Ferris. 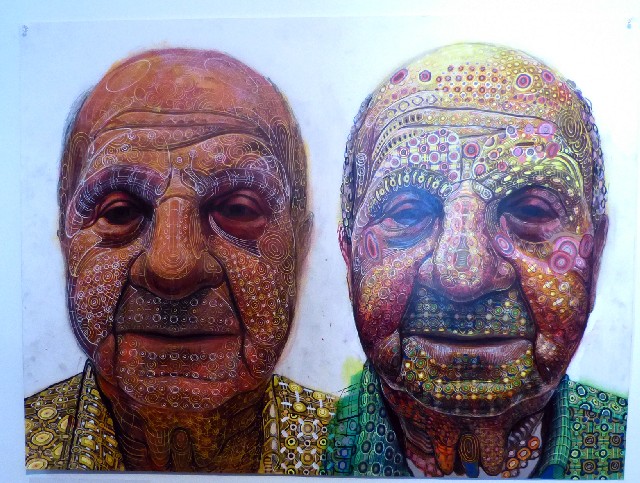 On a sunny, crisp, cold winter morning we joined our artist friends Pennie Brantley and Robert Morgan, for a scenic, hour-long drive from North Adams to Brattleboro Museum and Art Center.

He was one of 38 artists included in the exhibition Open Call NNE (North Northeast). It was juried by Richard Klein the exhibitions director of the Aldrich Contemporary Art Museum.

Other than breakfast press conferences it was the first time that I have attended an 11 AM exhibition opening. There were coffee and bagels rather than more enticing wine and cheese. The mid day opening, however, proved to be a well attended family event. A group show with that many artists is sure to draw a healthy attendance.

As Danny Lichtenfeld, who has been the museum's director for seven years explained, he runs a kunsthalle with no permanent collection. The old reconfigured stone building has generous space for several simultaneous exhibitions.

The primary space in several galleries was devoted to the Open Call., Given the nature of the juried show the work was eclectic but of uniformly professional quality. It is always a challenge for jurors to curate works that will hang with some cohesion. The skillful installation invited us to interact with each work individually. There was a lively mix of works from realism to abstraction, wall drawings, conceptual pieces, photography, video and sculpture.

In a large gallery we encountered World Leaders & Global Citizens Photographs by Patrick Leahy, U.S. Senator. It seems the liberal Vermont senator is well traveled and brings along a camera. While he has access to politicians and celebrities other than hints at some decisive moments this compilation of images reveals little in the way of a trained eye or sense of style. The point and shoot approach is notable for both the individual snapping the picture and the dignitaries he targets. No single image was particularly memorable.

Walking through the gallery displaying the photographs of Leahy was another with photographs by Sandra Matthew which evoked a large work by Nicholas Nixon. It had a similar feeling. She focuses on images of women and children. There were also large, black and whites assembled, taped and glued portraits by the photographer Eileen Claveloux. Making wet process prints she is able to conjoin them to achieve impressive scale.

The photographers were two thirds of an exhibition Portraits Expanded assembled by chief curator Mara Williams. The third and very different artist is Michael Ferris, Jr. His work is shown in the small Ticket Gallery to the left of a one level grand staircase. There is a lot of Wow factor in over life size assembled, carved wooden portraits. But the physical separation of galleries, at opposite ends of the museum with a light year of aesthetic, difference disrupts any sense of a unified theme for Portraits Expanded.

I tended to regard the works by Ferris as a stand alone and truly remarkable experience. In order to create these incredible pieces in wood he executes calibrated drawings and studies that evoke the feeling of topographical maps. It is a way of plotting out the construction of the sculptures. They entice the feeling of surrealists and the magic realism, fantasy painting of Ivan Albright. This artist deserves to be wicked rich and famous.

The Open Call includes an abundance of riches and you will have to hurry to get to see this show which is on view for just a month ending on February 7.

Arriving for the opening I was greeted by artists I haven't seen in decades. This included the sculptor Christopher Sproat as well as the artists Laura Chasman and Paul Bowen who had one person shows when I curated the gallery program for New England School of Art and Design/ Suffolk University.

Not long after her solo show Chasman was the winner of the annual Maud Morgan Prize from the Museum of Fine Arts. She does wonderfully intimate and quirky, eccentric portraits. She was attending with her husband John Anderson a trompe l'oeil sculptor in wood whose work was in the show. It was a table combining real and surreal objects.

Paul Bowen was one of my favorite Provincetown artists during many years of visits to the Cape. He was not in the show but attending as a neighbor. Several years ago he relocated to Vermont. He is know for his driftwood sculpture scavenged from beach walks. I asked if he is working with different materials but he replied not really. He has found sources relatively close to the studio. He informed me that he will be the cover story for the coming summer issue of Provincetown Arts Magazine.

Yet again we were amazed by the crisp rendering and poetic feeling of Morgan's work on paper "Belgian Seeder at Rock Field." Several summers ago Morgan and Brantley showed their realist works at the gallery of the Eclipse Mill in North Adams. They will exhibit together again in Pennsylvania and Pennie is working on an upcoming show in her hometown back in Missouri.

It was enjoyable again to see the minimalist sculptures of Sproat. A long narrow piece in polychrome metal with neon accents was suspended above us. Yet again it was work that we look up to.

The large format color photographs by Eric Korenman commanded attention. In particular I was absorbed by a flexing body builder "Ishmael."

Cathy Osman displays a large woven piece "Scaffolding." It was intriguing to see how she combined color as well as texture and its loose ends.

High above eye level we almost missed James Allen's evocative rendering of a 19th century ship's figure head. It made me flash on Moby Dick. Call me Ishmael.

Bracing against the winter blast we made it across the street for a cozy lunch at Blue Moose Bistro.

There is a lot to explore in picture perfect Brattleboro with many shops and antique stores. Including one that sells vintage Vinyl.

On the way back to the Berkshires we encountered an accident with a car in a ditch. It was a reminder that the winter wonderland has its challenges.

I guess that's why the museum schedules events in the broad daylight.