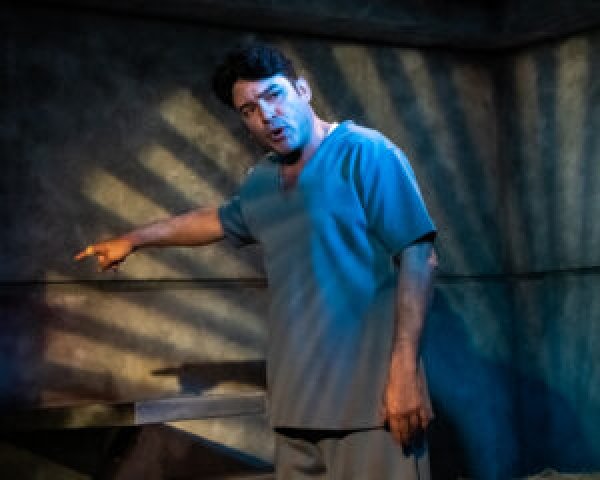 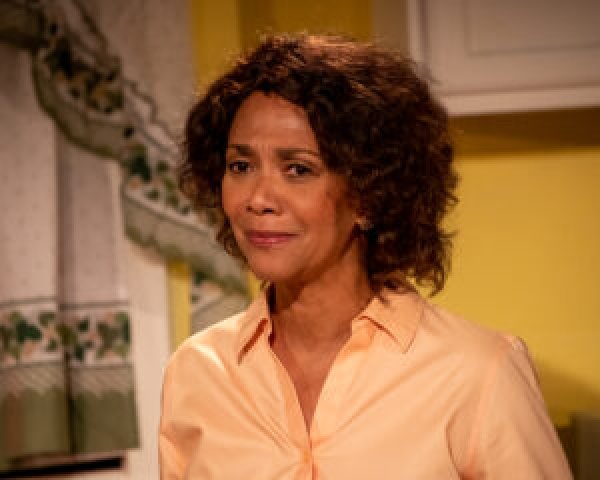 Two contrasting sets rest side by side on Boca Stage’s wide playing space for the professional company’s impressive current production of the moving drama, Time Alone. The sets could not differ more.

Meanwhile, on stage left, colors such as white and yellow brighten a seemingly real, warm, and inviting residence.

But make no mistake – that bright and cheery-looking living space on stage left is just as much a prison cell as the solitary confinement cage resting on stage right of the intimate Boca Stage. That is where Time Alone runs through Jan. 22 in a riveting and touching professional production.

The occupant of the aforementioned cage is 34-year-old murderer Gabriel Wayland. He is serving a 50-year- to-life sentence for the murder of a rival gang member. When the play by Alessandro Camon opens, he has spent five years in solitary confinement.

Opposite Wayland, the occupant of the bright-looking home is 44-year-old Anna Jackson. Certainly, she is not an inmate. However, you could say that the suspect who killed her police officer son has sentenced Jackson to a lifetime of pain, misery, anger, and a feeling of emptiness. Basically, it is an existence that seems to move at a turtle’s speed for Jackson.

Jackson finds herself in her own state of self-imposed solitary confinement. Essentially, by her own choice, she has become a shut-in. With the exception of one covered window, the residence offers no views of the outside world. This reinforces the notion of the home as a cell. It is one in which Jackson remains a prisoner to her circumstances and feelings.

In the taut, thought-provoking, poetic, and unflinching two-hander, Time Alone, the two characters deliver alternating monologues. Specifically, they address audience members about how their ordeal has impacted them. The characters never address each other or look at  each other. In fact, they do not know about each other. However, there is a link between them. Like a tight handcuff without an unlocking method, the link cuffs both characters in an unchangeable set of circumstances.

In a plot twist that comes toward the play’s ending, we learn about the tie that binds Jackson to Wayland forever.

Please, if you attend this production, and it is one you should not miss, do not spill the secret. Rest assured that this review will not reveal the plot twist. Instead, we will say that as the fast-paced production progresses, Camon’s play seems to hurtle toward an unexpected conclusion. It is an ending that will bring the characters together. Further, the denouement renews our belief in our capacity to forgive. Also, the playwright reminds us that humans will always possess a need to connect.

Camon uses poetic, evocative and unflinching language to bring Jackson and Wayland to life. The play they inhabit is more of a character study than a piece with a traditional plot structure. In fact, sometimes the language is graphic to the point that if you are easily queasy, you may gasp in disgust. Just know that Camon holds nothing back in expressing the characters’ views on the nature of time, regret, and the criminal justice system.

Certainly, time tortures both of these characters. And while, on the surface, Jackson may sound like the more sympathetic of the two, part of the play’s strength is that it makes us feel sympathetic toward a murderer. Of course, we do not condone what Wayland has done. And the playwright does not ask that we do. But, Camon injects Wayland with enough humanity that we feel for him. If we were sitting on a jury, it would be hard to recommend a death sentence for Wayland.

Under Genie Croft’s sensitive direction, the cast members, wearing Alberto Arroyo’s character-defining costumes, believably and passionately create three-dimensional characters. We sense in them a strong need to tell their stories.

Rio Chavarro, a veteran, classically-trained, versatile performer, communicates with his entire body, particularly his arms, as Wayland. The actor imbues the character with an in-your-face intensity, bitterness, and restlessness. These qualities suggest that the man has been cooped up for way too long. Further, he is just itching to move and communicate with somebody. Fortunately for him, Wayland has an audience to address. At times, he looks directly at one or two audience members, as though he is speaking directly to them.

Chavarro, an actor with dark hair and eyes, is almost constantly moving during his forceful yet impressively natural portrayal. During Jackson’s turns to address us, Chavarro’s Wayland remains fully in character, exercising or moving in some other manner.

While Chavarro’s Wayland is almost perpetually in motion, Karen Stephens’ Jackson is more restrained and nuanced.

As Stephens expertly portrays her, Jackson still harbors raw emotions from the time of her son’s murder. Indeed, she chokes back seemingly real tears, and speaks with sincere-sounding conviction and anger. But, to her credit, the multi award-winning Stephens just as deftly conveys her character’s former bright enthusiasm and zest for life. She possessed both before tragedy changed her life forever. Stephens’ dark eyes shine with excitement when she talks, for instance, about her former love for cooking. By contrast, those same eyes blink and convey bitterness, sadness, and anger. At times, the performer’s voice and body shake with authentic-sounding conviction.

In lesser hands, Jackson might come across as a self-pitying, thoroughly depressed and bitter woman who depresses us. But as Stephens deftly portrays her, the performer shows us glimpses of her character’s past happiness, as well as the raw emotions that still grip her.

Just as Chavarro does, Stephens remains in character and performs appropriate actions when her character is not addressing us.

In addition to the actors’ voices, we hear seemingly real sounds thanks to David Hart’s fine work as the sound designer.

Also behind the scenes, lighting designer Ardean Landhuis’s work reinforces the darkness of Wayland’s prison cell.  In addition, at one point, Jackson talks about the woman she used to be. And Landhuis’s lighting creates shadows of the performers; it is as though we can see her former self. Deftly, Landhuis brightens or dims the lights during Jackson’s monologues, depending on the brightness or darkness of the subject matter. Landhuis, who also designed the sets, wisely uses colors, such as red, to suggest violence or blood.

Time Alone is a taut, yet meaty drama. It forces us to think about topics such as hypocrisy, the nature of time, mourning, and the criminal justice.

“Closure is a myth,” Jackson tells us, suggesting that existing methods of punishment neither deter crime nor bring a sense of closure to victims.

When it comes to “restorative justice,” Jackson wonders aloud, “what is there to restore unless you raise the dead.”

While your mind may work overtime thinking about such topics after you have left the theater, you are sure to warm the edge of your seat during Boca Stage’s gripping production of Time Alone.

Boca Stage’s production of Time Alone runs through Jan. 22 at the theater, 3333 N. Federal Highway in Boca Raton. Showtimes are 8 p.m. Friday and Saturday, as well as 2 p.m. Sunday. Tickets for evening performances are $45, while entry to matinee performances cost $50. For more information, call (561) 447-8829 or go to www.bocastage.net.