Tosca at the Metropolitan Opera 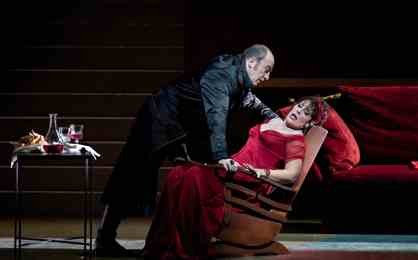 Tosca is a young woman trying to save her lover and faced with a sadistic and cruel opponent. 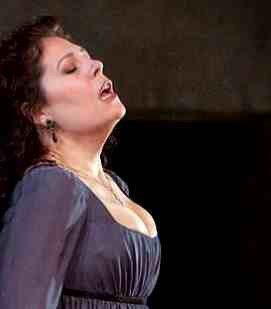 Sondra Radvanovsky is a compelling Tosca.


When Placido Domingo told Met management about a year ago that the great soprano Sondra Radvanovsky must be restored to her rightful position on the company’s roster, his demand could not be refused.  Trovatore is one of Radvanovsky’s signature roles, but the announcement that she would also sing Tosca came as surprise.  How would one of the supreme Verdi sopranos of our time fare in Puccini?

Last spring Radvanovsky gave a brief preview at Carnegie Hall.  The first note she sang of Vissi d’arte answered the question.  It was incomparably thrilling.

Monday night January 10th was the first performance of the Luc Bondy Tosca with Radvanovksy, Roberto Alagna stepping in for an ill Marco Alvarez, and terrifying bass baritone Falk Struckmann.

Radvanovsky has a perfectly beautiful upper voice.  When she breaks loose, she is as  exciting as anyone on the opera stage today. An immediacy and vocal personality grabs and keeps your attention.

What controversy there is about Radvanovsky, apart from a pitch problem which certainly was not apparent on Friday, is her ‘acting.’  While it is often said that her containment when she sings legato does not reflect the emotion of her singing, certainly as she settled in to Act II, her body reflected the expressed emotion.  An image of her on a window sill, looking out over Rome with the fingers of one hand splayed, lingers.

Her interpretation of Tosca is a new take on the role.  Like a good actress, she has read the text and found a place to settle into the character.  She talks about Tosca as a young singer, not a grand diva from La Scala.  Tosca is a girl in love, jealous, and concerned about the safety of her politically incorrect boyfriend.

Act II is usually staged as a mano a mano between Scarpia and Tosca – two characters of equal size, each trying to dominate the other.  Radvanovsky makes Tosca vulnerable, a young woman who has no idea what to do about the sadistic advances of the chief of police.  In her empire red dress, she is not so much a seductress as a new flower blooming.

In this interpretation she is assisted by a great Scarpia, Struckmann, who clearly salivates as he contemplates the seduction of an innocent.  When in Act III, Cavaradossi remarks in disbelief that Tosca’s sweet hands have killed the chief of police, the wisdom of Radvanovsky’s interpretation is clear.

Struckmann is a Wagnerian bass-baritone but his take on Scarpia is spot on.  His simulated tenderness in Acts I and II fools Tosca and for a moment we believe he has a heart.  But then he turns on a dime to the pleasures of cruelty.  It’s hard to think of a better acted dying and death than his, as his body sprawls on the red sofa with legs akimbo upward.

Only Scarpia and a guard on a parapet in Act III moved comfortably to the tempi chosen by the conductor, Marco Armiliato.  The orchestra dragged uncomfortably and the singers were somewhat cramped. Armiliato’s choice seems odd and unfortunate.

The problem with the first iteration of the Bondy production was Tosca, although no one would discuss the failings of a singer they liked.  The second cast brought in last spring was superb.  Now Bondy has come in and tweaked.  In removing a painted breast nipple that pointed like a headlight, taking out Scarpia’s French kiss of the Madonna and the blow job at the beginning of Act II, cleaning up Tosca’s jump, which ended midair on opening night, the staging is more palatable.  It could perhaps use some re-thinking to make it more interesting.  Radvanovsky has certainly done her part in creating a character who is probably closer to Puccini’s intention that any other singer’s in the past.  For instance, she got laughs for bringing forward the humor in the first Act.

Production problems have by and large faded into the background.  Listening to and watching Radvanovsky, a great soprano with a huge voice, Marcelo Alvarez, a delightful tenor, heartbreaking at the end of “lucevan le stelle”, and the arresting Struckmann makes for a wonderful evening at the Met.