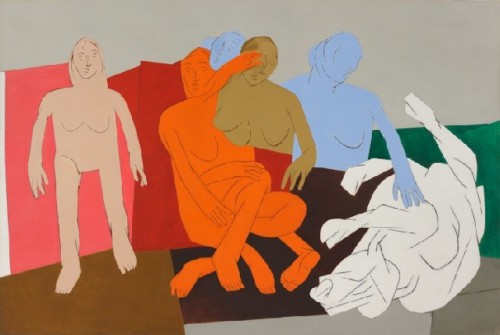 Midnight to the Boom: Painting in India after Independence
From the Peabody Essex Museum’s Herwitz Collection

When the clock struck midnight on August 15, 1947, India’s independence from British rule fueled a revolutionary art movement that continued through the economic boom of the 1990s. Newly unfettered by traditional cultural expectations, three generations of Indian artists embraced their individual identities, stayed true to their roots and embraced the world’s artistic community.

Nearly 60 works by 23 leading artists were selected from PEM's Chester and Davida Herwitz Collection -- internationally recognized as one of the largest and most important collections of modern Indian art outside of India. They are presented alongside conversational groupings of key works by more familiar artists including Paul Cézanne, Marc Chagall and Andrew Wyeth, lending context to the development of this movement in the wider world of modern painting.

Artist and designer Nick Cave creates category-bending Soundsuits. Equal parts sculpture, costume and performance, Cave's larger-than-life-size creations take on a life of their own. Constructed from a colorful bricolage of materials including twigs, sisal, beads, sequins and feathers, Cave's Soundsuits are faceless and otherworldly, obscuring the wearer's identity, gender and class. For the installation at PEM, three never-before-seen Soundsuits commissioned by PEM will make their debut along with an immersive film projection.

One of Japan’s preeminent landscape photographers, Toshio Shibata (b. 1949) is known for exploring the delicate balance between human-made structures and nature. Photographing erosion control barriers, water catchments, roads, dams and bridges, he examines the unique appearance of such structures in his native land. Through his lens, riverbeds can look like origami, and waterfalls resemble kimono.

This exhibition of 28 large-format works will be the artist’s first solo show in an American museum since 1995. Long recognized for his striking black and white prints, the artist has been working increasingly in color. His color pictures will make their American museum debut at PEM. Shibata was recently featured in a two-person show at the National Arts Center, Tokyo, and in a solo retrospective at the Tokyo Metropolitan Museum

Created at significant social and political moments in America, this spectacular selection of 100 paintings, photographs, sculpture and prints by 43 prominent African American artists invites conversations about art, identity and the rights of the individual.

Key works by artists including Allan Rohan Crite, Sargent Johnson, Renée Stout, Roy DeCarava, Romare Bearden, William H. Johnson and Norman Lewis address a range of subjects including the African diaspora, jazz, nature, the persistent power of religions, identity and the rights of the individual from the Harlem Renaissance through the Civil Rights era, and beyond.

The exhibition is organized by the Smithsonian American Art Museum.

Fabergé, From the Collection of the Virginia Museum of Fine Arts

The name Fabergé is synonymous with refined craftsmanship, jeweled luxury and the Russian imperial family. More than 230 singular treasures created by the House of Fabergé in the late 19th and early 20th centuries are featured, including enameled clocks, gold cigarette cases, hardstone carvings, ruby encrusted brooches and four signature imperial eggs made for Nicholas II and the Romanov family. This exhibition, organized by the Virginia Museum of Fine Arts, explores ideas of luxury, innovation, entrepreneurship and imperial patronage while providing insight into Peter Carl Fabergé's life, business and legacy.

Impressionists on the Water

As an artistic subject, there could be no better match for the Impressionists than the element of water.  The play of light, sense of atmosphere and physical experience of floating in a groundless world were irresistible for artists like Monet, Renoir, Sisley, Signac and Caillebotte  (an accomplished sailor in his own right)  -- key Impressionists who spent many hours at sea, on river boats, leisure craft and floating studios.

These artists painted in gestural techniques to suggest movement and the ephemeral, yet also frequently made specific notations of changing configurations of hull, sail and rigging. In the process, they celebrated the experience of gently drifting on a riverboat, or braving the elements on a ship at sea.

Through more than 80 oil paintings, works on paper, models and small craft, this exhibition illuminates the importance that access to the sea and France’s extensive inland waterways played in the development of one of the world’s most robust artistic movements.

Organized by the Fine Arts Museums of San Francisco.

Japanese designers such as Issey Miyake, Rei Kawakubo and Yohji Yamamoto reshaped fashion in the early 1980s. The narrow silhouettes of Western couture gave way to flowing, sculpted forms. A reduced range of color emphasized cut and proportion. The voluminous spaces they created between body and fabric boldly redefined Japanese avant-garde fashion and forced people to reconsider the relationship between art, design and fashion. Co-organized by the Kyoto Fashion Institute and Barbican Art Gallery, London.