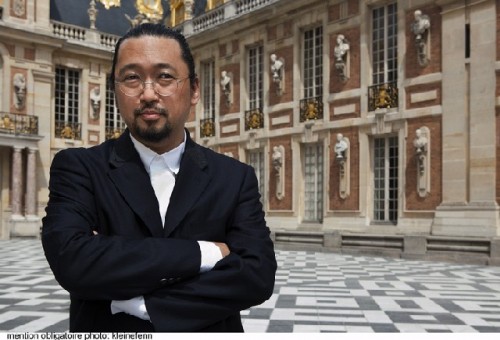 The Japanese artist Takashi Murakami has stormed Versailles as a part of the Cultural Revolution. 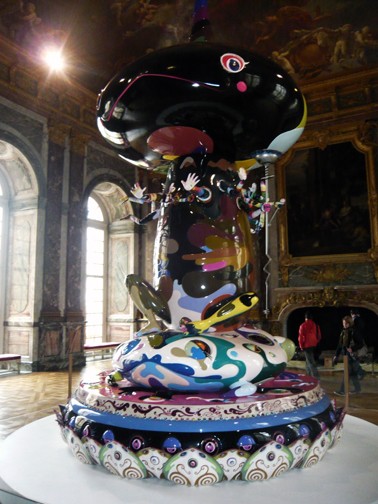 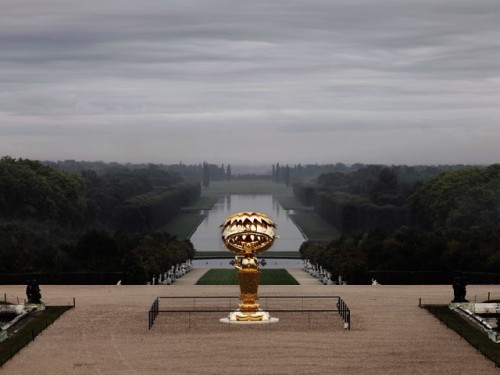 Oval Buddha and view of the gardens. Images courtesy Versailles and the artist. 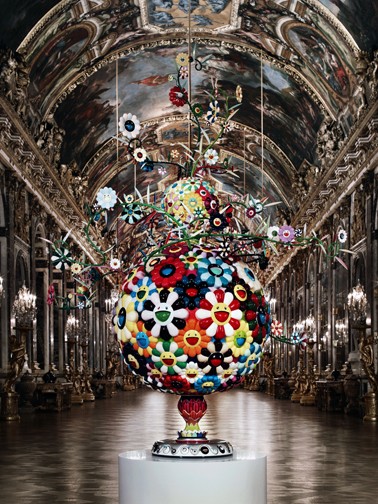 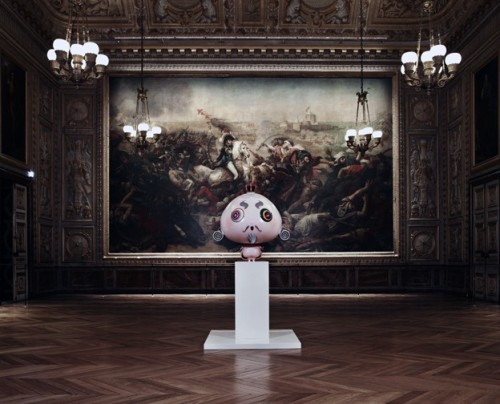 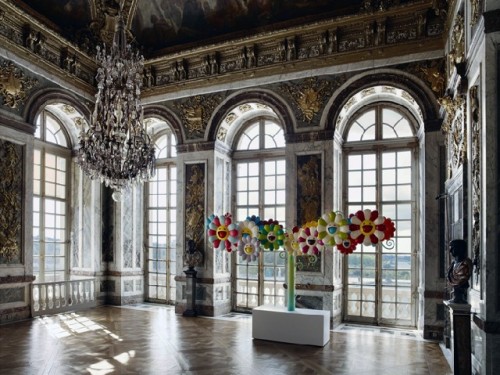 A spectacular setting for contemporary art. 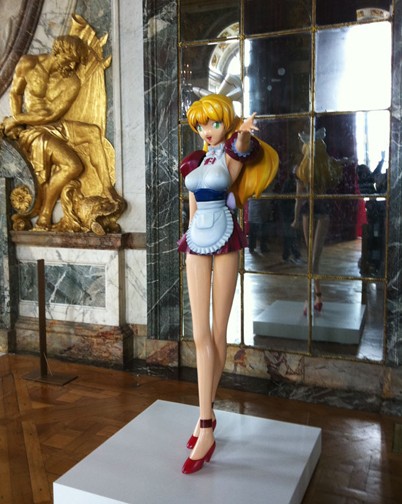 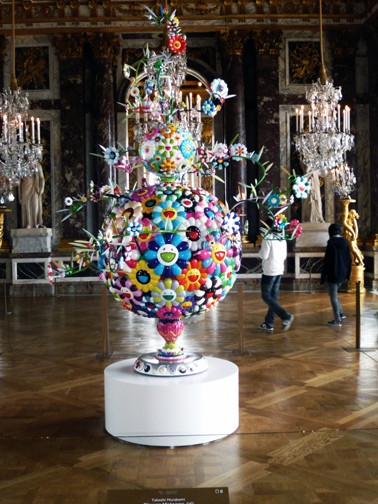 The Bourbon Prince was not amused. Rubin photo.

Once again the battle between preserving classical French culture from the ugly claws of globalization has been making headlines in France. This time around it is provocateur artist Takashi Murakami, Japan’s answer to Andy Warhol, whose recent exhibition of comic based manga and anime inspired paintings, sculptures, and one rug, at the Château Versailles and its gardens (September 14–December 12, 2010), raised the hackles of Prince Sixte-Henri de Bourbon-Parme a descendent of the French king Louis XIV and the Coordination de la Défense de Versailles, an organization specifically formed to stop artist Jeff Koons from exhibiting at the palace in 2008. The suit, intending to give Koons and his giant metal dog the boot, initiated by another Royal, the prince’s nephew, was dismissed by the court.

Condemning Murakami’s “veritable ‘murder’ of our heritage, our artistic identity, and our most sacred culture” de Bourbon-Parme is claiming that the artist’s work shows no respect for the glory of Versailles. “There are puppets in that exhibition that are frankly grotesque. These works undermine the unity of style of the museum.”

It also, as the CDV chimed in, “violates the harmony of the palace itself which is a symbol of French history and culture.” Various Murakami’s responses! “When someone scores a goal, someone is going to be unhappy.” “I am the Cheshire Cat who greets Alice in Wonderland with his devilish grin, and chatters on as she wanders around the chateau.” “This is a “face-off between the baroque and postwar Japan,” “I hope it will create in visitors a sort of shock, an aesthetic feeling.”

On the side of Murakami and the hordes of money paying tourists who visit Versailles each year – it is the third most popular tourist spot in France – are the so-called powers behind the throne. To Jean-Jacques Aillagon, the former culture minister and current palace museum director, who states that it is his duty to open the palace to artistic creations of our times, “the coexistence of Murakami and Versailles makes perfect sense.” The Hall of Mirrors is a kind of manga, a comic strip for glory of the king’s reign he told one interviewer.

To Laurent Brunner, the man who chooses the artists who exhibit at Versailles – he toured me through the exhibition – “my nine year old son is not interested in Veronese but he does relate to Murakami’s work.” For Laurent Le Bon the director of the Centre Pompidou-Metz and curator of the exhibition, “All I really want to do is make a dialogue between Murakami and Versailles.”

Though the Murakami exhibition was not stopped in its tracks the ‘powers that be’ did capitulate ever so slightly. Not on view, as they were deemed too explosive to show, were Murakami’s more titillating – some say pornographic – larger than life “body fluid” sculptures. Missing in action was My Lonesome Cowboy (1998) which features a masturbating young man whose ejaculation, exploding from a large penis, floats lasso-style in front of him, and Hiropon (1997), a young woman wearing a bikini top and nothing below. She is squeezing her humongous breasts and oversized nipples while a frothy stream of milk swirls around her like a jump rope.

The closest we get to the subject of sex at Versailles is the six foot tall Miss Ko² (1997), a young, short-skirted, stiletto-heeled, perky breasted Barbie doll blond. Awkwardly placed in a corner of the Salon De La Guerre, Miss Ko² is dressed as a waitress, the type that the young female Hooter-like servers wear at Anna Miller’s, a popular chain of restaurants in Tokyo.

Whether Murakami succeeded in creating a vibrant and meaningful dialogue is a matter of many opinions. All of France seemed to weigh in. For me, who is of the mind that Marie Antoinette got a bum deal, Murakami’s invasion of both the King and Queen’s royal chambers, is little more than sideshow entertainment – read diversion  – for youngsters, as well as culture vulture tourists who know little more than its former occupants lost their heads. It offers a respite from mere historical considerations, or for that matter from any serious thinking.

Of course, the people who have the most to gain from the cache of Murakami’s Versailles outing, are the galleries that represent him, the museums that show him, those who collect his work, and of course the artist, whose larger works – in 2008 his ‘Cowboy’ was sold at Sotheby’s Contemporary Art auction for $15,161, 000 – have been known to bring in millions.

This said, Murakami, like Jeff Koons, another ‘fast food’ mega-millionaire, art manufacturing entrepreneur who no longer applies his hand to his own work – a large staff in New York and Japan does his bidding – does have a gift for supplying the public with kitschy, cartoon based, entertainment pieces.

Two, maybe three, of the 22 works on view at Versailles manage to register high on the Richter scale in visual enjoyment, craft and placement, the latter, due to the already spectacular Baroque nature of Versailles itself, being of utmost importance. The other works, occasionally ironic, mildly impertinent, and cutesy pooh in their insistence, come across more a Toys “R” Us display than an actual work of art. Here, the peerless neutering powers of the Sun King’s palace all but removed Murakami’s vitals.

A good example of such neutering is Flower Mantango (2001-2006) the artist’s oversized, tendril-sprouting, double-globed sculpture covered with grinning flowers in a thousand eye-popping colors. Placed at the entrance of the spectacular Hall of Mirrors with its seventeen huge mirrored arches reflect the seventeen equally impressive arcade windows that look out onto the palace’s gardens Mantango is reduced to an annoying accessory to the fact, the fact being that you are standing in the jewel of one of the world’s most awe-inspiring palaces and nothing else really matters.

His display of Superflat Flowers (2010) in the Salon de la Paix fares no better. As far as ironic – perhaps the entire exhibition can be deemed thus – The Emperor’s New Clothes (2005), a nod to a Hans Christian Anderson short story, is the culprit. Here Murakami places a diminutive, large-headed, wide-eyed, comedic-looking king in the Coronation Room, a room filled with paintings celebrating the glories of Napoleon Bonaparte. This juxtaposition does raise a myriad of thoughts, from humorous to insulting to calculatingly subversive, no doubt reflecting the artist’s intention.

When Murakami’s efforts do hit the bull’s eye, it is as if Marie Antoinette and Louie XIV, the palace’s most notorious occupants, specifically commissioned the work of art, for not only does it fit perfectly where it is placed, be it in the palace or outdoors, it becomes inseparable from its surroundings. Tongari-Kun (2003-2004) is Murakami at his most inventive and luxurious best. The 23 foot Baroque-looking sculpture, a colorful fusion of surrealism, art nouveau and a whiff of Japanese manga flavor, features a giant-headed, fiberglass and steel Buddha with numerous arms protruding from its side. He is sitting on a frog which in turn is resting on a lotus flower. Placed in the middle of the ornate Salon D’Hercule, under a ceiling painting Apotheosis of Hercules by François Le Moyne, and surrounded by two Veronese’s, this imposing Buddha is the exhibition’s indoor show stopper.

Equally impressive are Murakami’s large, stately, and richly detailed sterling silver Oval Buddha Silver (2008) situated in the Salon De L’Abondance beneath the portrait of Louis XV, the great-grandson of Louis XIV, and the bronze and gold leafed Oval Buddha (2007-2010, which overlooks the palace’s extensive gardens. It is here that Murakami, if only during the run of exhibition, gets to rule.