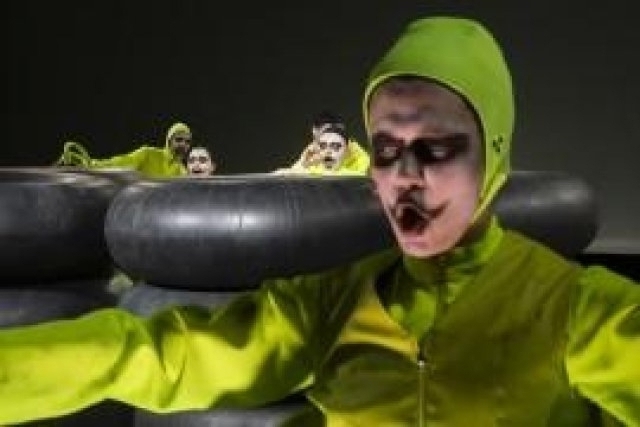 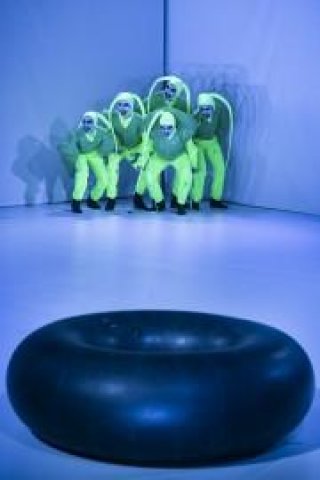 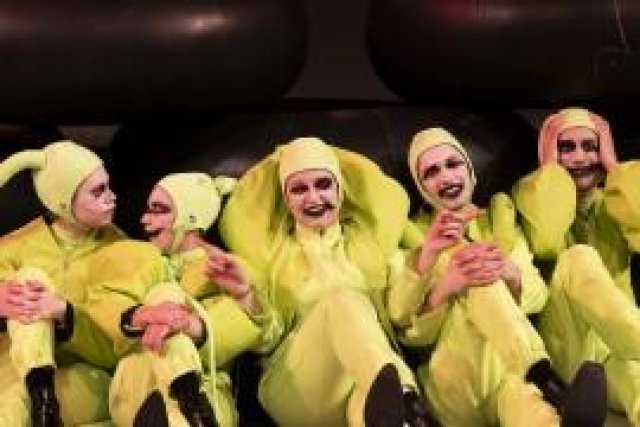 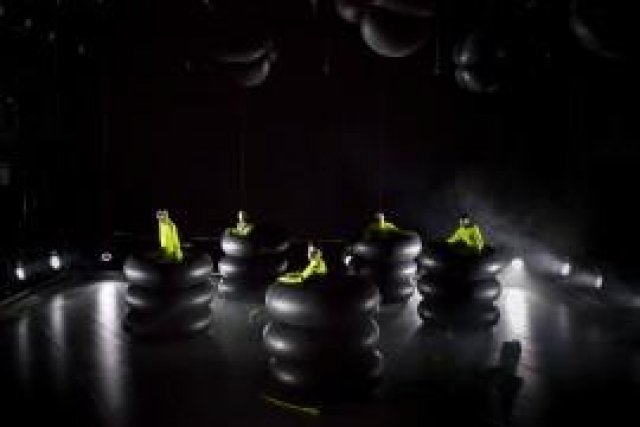 Clockwork Orange, based on the novel by Anthony Burgess, now a theatre adaptation by Tilo Nest

Who does not remember Stanley Kubrick's 1971 film A Clockwork Orange based on the novel by Anthony Burgess from 1962!? It was one of the most chilling cinematik affairs then – and now in the theatrical adaptation by Tilo Nest at the New House of the Berliner Ensemble in Berlin, Germany – it remains frightening still.

Five British youths, the droogs, enjoy terrorizing the area  by beating, raping and even killing who accidentally crosses their way. Alex, their self-appointed leader, ends up in prison, participates in a rehabilitation program, but returns to the streets and his four buddies as soon as he is freed.  Remorse seems to come to the fore but the lure of committing violent acts, seemingly creating freedom, wins out.

Bernhard Siegl's dark and empty stage, populated by equally drab rubber tires, supports  this shocking message. Although clad in bright, clown like outfits (by Esther von der Decken), with ever changing colors that depend on the lights focused on them, the droogs succeed with their comments and moves in keeping the audience at a resentful  distance. Never ever is anybody tempted to feel sympathy with actions and actors on the stage – cruelty reigns supreme there and is, one hopes, discarded as unacceptable by the onlookers.

The five droogs (Marc Benner, Anna Koellner, Maeve Metelka, Leonard Pfeiffer and Laura Talenti) present a fabulous team, dancing and acting with high intensity to the music by Michael Haves. At the end, the almost two hour long tour de force is rewarded with big applause - for the performances, not for the message.

The Berliner Ensemble has to be commended for opening this dialog, good and viscous exist side by side in human beings. It is the responsibility of society to realize and resent truly mean aspects of it. This theater experience offers a horrible but true view in the Nether aspects of the human psyche. Bravo to the Berliner Ensemble and the School for Theatre Art Ernst Busch for bringing it into the conscience of the audience.