The Full Monty at Broadway in Lauderhill

Do the Men Take It All Off 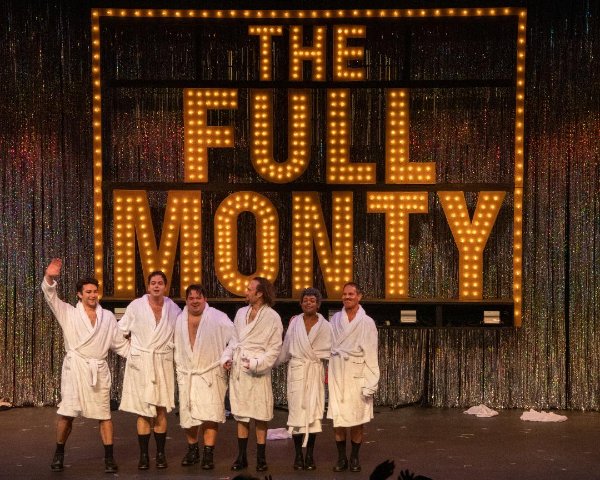 Photo courtesy of Lauderhill Performing Arts Center The men prepare for their big night in The Full Monty. 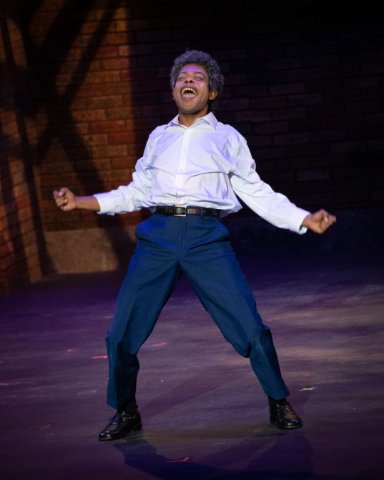 Do the men of The Full Monty really strip naked all the way?

They come pretty close. At least they do in Broadway in Lauderhill’s strong season-opening production of the sometimes charming and humorous, but problematic show, The Full Monty at The Lauderhill Performing Arts Center (LPAC).

The production runs through Jan. 29. It opens Broadway in Lauderhill’s three-show 2023 season. The other offerings are the showbiz classic, 42nd Street and the biographical Always..Patsy Cline.

In The Full Monty, the emotionally-injured men lay bare their insecurities and hurt feelings after losing their jobs as steelworkers at a Buffalo plant during the hard economic times of the 1980’s. The stage musical is an Americanized version of the 1997 film with the same title. The largely faithful stage adaptation transplants the tale from England to Buffalo.

Give the unemployed men credit. After all, they dare to do something bold, if a bit risqué, in order to gain self-confidence, heal from their hurt pride, and earn money. Specifically, the unemployed steelworkers work together to present a male stripping show. By the way, the show’s title refers to the “nothing” that they will strip down to.

Part of the show’s message seems to be this:  If you are willing to step outside your comfort zone by doing something you thought you’d never do, you can feel better about yourself…and maybe earn some cash.

In this case, these men harbor a preconceived notion of what it means to be a “man.”

The Full Monty, which can be formulaic at times, is not an entirely original piece. Indeed, shows that have challenged the notion of malehood as machohood include Billy Elliot and Kinky Boots.

In the former, an English lad living in a rough blue-collar mining town wishes to become a ballet dancer. The boy’s wish runs contrary to that of his father’s and the townsfolk’s. Namely, they envision the lad as a boxer.

Meanwhile, in Kinky Boots, the owner of a struggling shoe factory in England tries to save his business. Specifically, he partners with a drag queen to manufacture a line of high-heeled boots. The drag queen, with a stage name of “Lola,” proves to be more of a “man” than at least one character thinks she is.

The Fully Monty is an undeserving Tony-nominated show. In 2001, it lost the “Best Musical” Tony nod to Mel Brooks’ The Producers. The former steelworkers are desperate in The Full Monty. For instance, one of them needs to pay child support. If he does not, he will lose partial custody of his 12-year-old son.

The men see their opportunity to feel better about themselves and make money while spying on their wives at a “girls night out.” Specifically, the women are watching a Chippendales performance. The group is a touring dance troupe best known for its male striptease performances. The group is also famous for its members’ distinctive upper body costumes.

When the unemployed workers realize that their wives are paying money to see the Chippendales, they figure they could earn cash doing something similar. However, they take it a step further. Unlike the Chippendales, they will strip completely naked. At first, it is obvious that the men are awkward in their dancing and stripping moves. Also, they are reluctant to follow through with their plan. But with perseverance, and some encouragement (from a 12-year-old boy!) they follow through.

Jerry Lukowski’s effort to keep partial custody of his 12-year-old son, Nathan, is the central and most compelling battle in The Full Monty. Unfortunately, one of the show’s problems is that the almost non-existent denouement never reveals whether Jerry has raised enough money to keep his son. At the end of the show, we simply witness the men’s stripping performance.

The Full Monty touches on various themes without exploring them to any real extent. And there are some eyebrow-raising decisions that the show’s creators made. For example, one of the characters attempts suicide apparently because he lost his job as a security guard at the plant where the men used to work. His former co-workers save his life. Oddly, afterwards, the men sing about alternative ways that he might have considered to kill himself. The song’s title is “Big-Ass Rock.” “Let’s find a rock, I mean a big-ass rock. Or maybe something like a cinder block is better. I’ll hoist it up and drop it on your face, my buddy,” one of the characters sings.

In addition to suicide, “The Full Monty” briefly explores homosexuality. But the show’s creators never make it clear what they wish to say about the topic. At one point, one of the former steelworkers, Malcolm, loses his mother. At her funeral, he expresses through song his belief that a relationship with his boyfriend will end his loneliness and longing. Shouldn’t he and the others focus their attention on mom? She just died.

To be sure, the musical includes some touching, heartfelt moments. For example, Lukowski observes with affection his son sleeping after the boy offers to help fund the guys’ performance by donating part of his college savings. As he watches the youngster sleep, dad touchingly sings the tender song, “Breeze Off the River.”

The pop-rock songs, with music and lyrics by David Yazbek (The Band’s Visit, Tootsie, Dirty Rotten Scoundrels) are not particularly memorable. However, some songs reinforce a scene’s mood. In addition to the tender and moving “Breeze Off the River,” there is the tough, forceful “It’s a Woman’s World.” The men’s wives sing it at the beginning of the show as sort of a bad ass, “girl power” song (think the musical, Chicago). There is also the rousing “Let It Go” at the end of the show, not to be confused with that same title song in Frozen.

The libretto by the late, great Terrence McNally (Ragtime, Kiss of the Spiderwoman)  is toucing and funny at times. However, this effort is far from McNally’s best work.

The Full Monty may have shortcomings, but this production’s cast succeeds with lesser material. For starters, the performers possess clear, expressive, and strong voices. The recorded music that accompanies them is serviceable, although you always want live musicians for live musical theater. In addition to singing, the actors, through Alex Jorth’s choreography, convince us that their characters are awkward dancers. After all, these men are hardly professional performers.

Kieran Danaan lends Jerry Lukowski a fiercely determined and aggressive demeanor without making the character unlikable. Jerry may be a bit of a slacker. However, Danaan’s Lukowski looks and sounds determined to keep partial custody of his son. In a smart acting choice, while the actor sings the song “Breeze Off the River” he gently, with affection, straightens out the comforter covering Jerry’s son as the youngster sleeps.

Speaking of the boy, teenage actor Jay Hendrix convincingly conveys a good-natured, optimistic aura as Nathan. Hendrix looks and sounds impressively natural in the part, making Nathan instantly likeable. If his parents arguments or anything else is bothering him, the stoic Nathan does not show it as Hendrix portrays him.

As his mother, and Jerry’s ex-wife, Elizabeth Sackett believably plays the character with frankness. Pam Lukowski is brutally honest with her husband; if he cannot come up with the necessary amount of money to pay child support, she will take Nathan away from him.

Other bright spots in this strong cast include a believably uptight Richard Weinstock as Harold Nichols, who becomes the choreographer of the stripping group.

Meanwhile, Ryan Michael James nails male stripper Buddy “Keno” Walsh’s flamboyance, while also injecting him with toughness. Certainly, as James portrays him, the character is no pushover. And Marcus Davis delivers a showstopper as Noah “Horse” T. Simmons, who stil has a few good steps left in him.

Individually, each cast member creates a believable character. In addition, the actors work well as an ensemble; they listen to and react to each other.

Speaking of Buffalo, Penny Williams’ character-appropriate costumes include a shirt with the Buffalo Bills logo.

Everyone involved with this production, from the actors to the behind-the-scenes artists, does the best they can with less than stellar material. Unquestionably, Broadway in Lauderhill’s next show, 42nd Street, is  far superior to The Full Monty.

The Full Monty runs through Jan. 29 at the Lauderhill Performing Arts Center, 3800 N.W. 11th Place in Lauderhill. For tickets and more information, go to https://www.lpacfl.com/events-tickets/broadway-at-the-lpac.