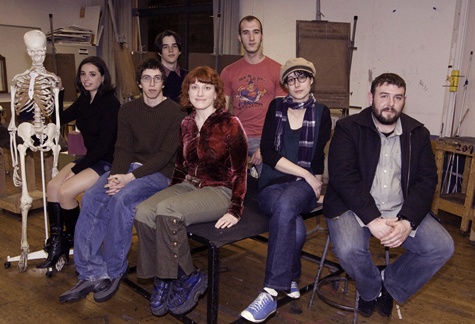 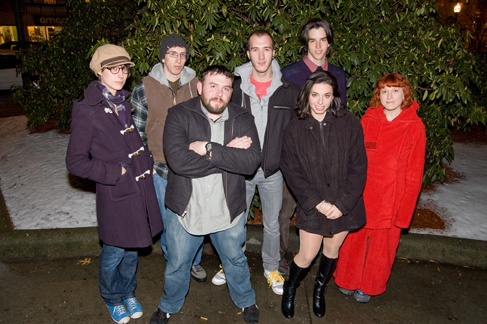 Another view of the award winning student artists. 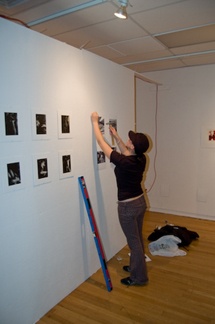 Cross sections of the childhood home of Kaitlyn Emerson. 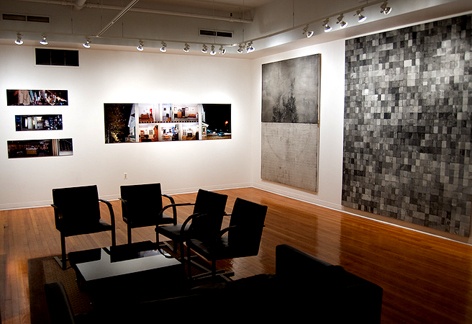 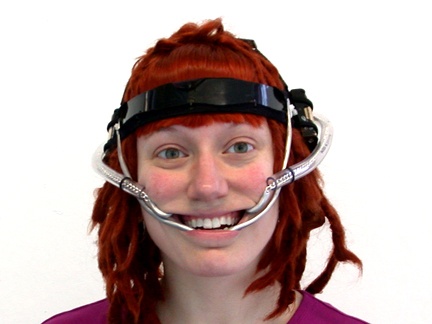 Kristin Kyper wearing the Machine That Makes You Smile. 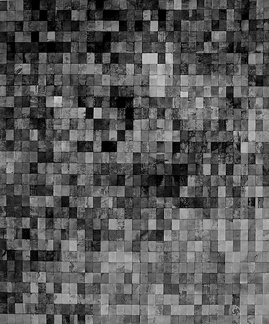 The 1050 wooden blocks with oil on plaster by Patrick Short.

For the third time  The New England School of Art & Design at Suffolk University is presenting the eighth annual Stephen D. Paine scholarship exhibit, featuring seven of Boston's award winning artists. The series of annual awards and scholarships to graduating artists from fine arts programs in the Boston area was initiated by the Boston Art Dealers Association  (BADA) in memory of the prominent contemporary art collector. Paine and his wife Susan were particularly involved in supporting emerging artists. The funds for the annual awards are raised through a gala event which was staged, this year, in the lobby of the school's building at 75 Arlington Street as a preview on the evening before the public opening.

Judging from a pool of undergraduate students applicants were Anne Hawley, Director, Isabella Stewart Gardner Museum, and Pieranna Cavalchini, the Gardner's Curator of Contemporary Art. The 2007 scholarship winners are Kaitlyn Emerson, Kristin Kyper, Daniel Murphy all currently seniors from the Massachusetts College of Art. Those receiving honorable mention are Rachel Akiba, Brian Duffy, and Conor Maguire all of whom attend Massachusetts College of Art, and, Patrick Short, who is in the visual arts program at Boston University.

This year's exhibition showcases the wide range of artistic styles, media, and disciplines that were selected by the jurors. Rachel Akiba, through photography and prints explores moods and emotions which are used to communicate ideas of learning and development. Brian Duffy is showing a series of poetic and humorous hand-drawn animation shorts. Kristin Kyper showcases her multidisciplinary skills in metal sculpture, installation and performance with a series of wearable devices. Conor Maguire presents his industrial design concepts of products both useful and imaginative. Kaitlyn Emerson explores personal space by representing a cross section of her entire house in large format photography. Daniel Murphy explores film-noir and fairytales in video work. Patrick Short is exhibiting wall-sized, monochromatic, abstract paintings that completely immerse the viewer.

The Stephen D. Paine scholarship and the accompanying exhibition brings together many different sections of the Boston arts community and gives much needed and valuable exposure to emerging artists. This exhibit provides a unique opportunity to explore the work of outstanding student artists. Since this scholarship was established many of the award recipients have gone on to establish significant reputations in the art world.

Arthur Dion of the Boston Art Dealers Association (BADA), which organizes the scholarship states that "The Stephen D. Paine scholarship was established in 1999 by the Boston Art Dealers Association. BADA, which was formed in 1989, decided in 1997 to establish a program to benefit the broader visual arts community and settled upon the idea of a scholarship program that would award, on a competitive merit basis, grants to students entering their fourth and final year of training in any Boston undergraduate studio degree program. Having conceived the project, we thought to bring the concept to Stephen Paine, who, with his wife Susan, was assembling one of the outstanding collections of contemporary art in the area, both privately in their home and also at his firm, Wellington Management.  Both also demonstrated a particular affinity for young artists and the schools at which they train. Before our appointment, Stephen Paine died, and we named the scholarship after him."

Starting this year the scholarship amounts have increased with three $4000 grants for the  winners and, for the first time, $500 each was awarded to those earning honorable mentions. The past jurors for the awards have included Joe Thompson, Director of Mass MOCA; Linda Shearer, then of the Williams College Museum of Art; Joe Ketner, then of the Rose Art Museum; Jill Medvedow Director of the Institute of Contemporary Art; William Stover of the Museum of Fine Arts, Boston; Theodore E. Stebbins, Jr. and Virginia Anderson from the Fogg Art Museum of Harvard University