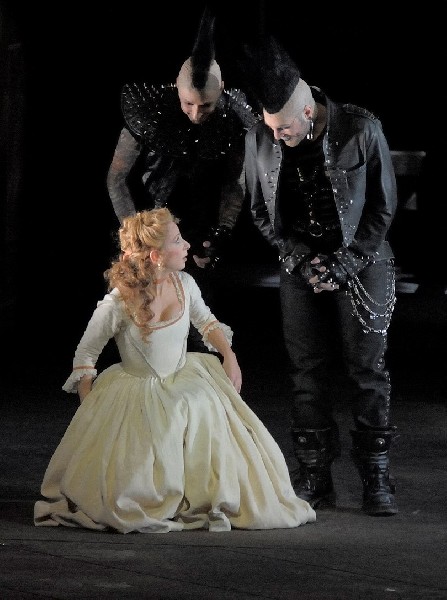 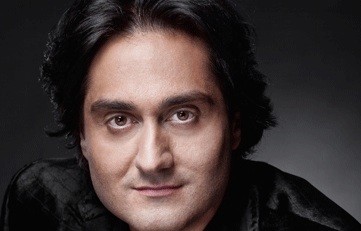 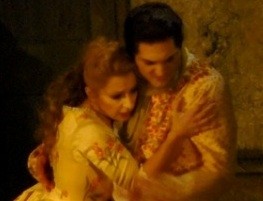 The battle between love and money is joined in Manon 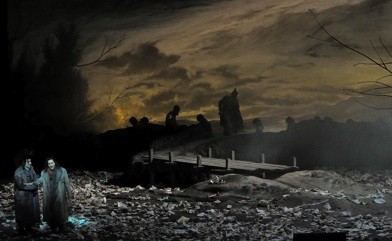 On the road to Le Havre, the lovers meet for the last time. 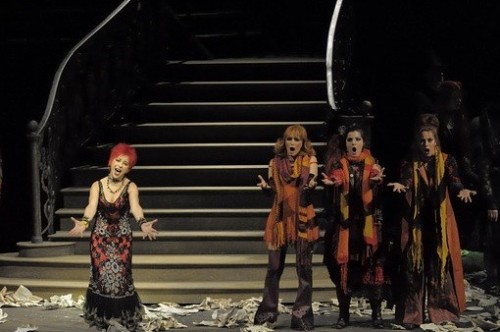 What happens when money is girl’s best friend.

Jules Massanet’s Manon was a smash hit from its first performance.  Antoine-Fracois Prevost d'Exile wrote the story of Manon, a sensation in the 18th century. Composer Daniel Auber used the story to compose an opera, which has understandably disappeared.  Massanet took it up next.  Manon has stayed in the opera repertory ever since, but is performed in the US less often than Puccini’s version which followed in 1893.

When Puccini was asked why he was compelled to set this story yet again as an opera, he replied that a woman like Manon could have as many composers as she had lovers.

With Natalie Dessay in the title role, it is easy to see why men adore Manon at first glance.  She alights magically on stage, on curving staircases and even a motorcycle.  Why would a woman like Manon as embodied by Dessay want to go to the convent to which she has been consigned.  Moment to moment this wisp of a woman electrifies.

Dessay’s arresting acting is only a bon bon however to the towering beauty of her voice.   Although her top was a bit wobbly at the outset, she settled in to what we have come to expect, a magnificent performance by a singer who can decorate and embrace those high notes with consummate skill.

We first noted Giuseppe Filianoti in L’Elisir d’Amour at the Lyric Opera of Chicago and then in Tales of Hoffman in New York.  His warm and thrilling voice is edged by a steel that shines.  One of the great tenors performing today, Filianoti, like Dessay, is a rare talent who not only sings each note with the full impact of the rising emotion, but also shows us the character’s arc.  As Le Chevalier des Grieux, Filianotti ranged from a confidant but sad chevalier who is instantly attracted to Manon, through the ecstasies of love and then penitence over love’s loss when a father removes Manon.  (Traviata keeps coming to mind here.  Dessay will be Violetta at the Met this spring).

Grieux becomes an ambivalent man of the church, but when love overcomes him, he joins Manon in a "Duo de Saint-Sulpice" of unsurpassed beauty.  Dashed again by Manon’s choice of luxury over love when he loses all his money, she is ruined, although he is able to buy his way out of prison.

At one point a thick fog rolled in from the sea across the stage and filled the cavernous space of the Opera Bastille.  This is the people’s opera house in Paris and a welcome sight after opulent houses.  Opera Bastille may be pared down, but the stage is not. The production team has done so much without all the the expense and risky mountings such as those at the Met Opera.

Coline Serreau is responsible for the mise en scene. Costumes, lighting and particularly the kooky automotive props were surprising and delightful eye candy.   From the Lescaut and company punks with spiked hair and tomahawks to the corps de ballet, dressed in orange, greens, yellows, pinks and reds as they danced on roller skates, the production delights.  In contrast with a dark, bleak period settings, the visuals are campy and cool.  Girls came on a runway dressed for a spring fashion show in tight short gowns and then hooped extravaganzas.  Backgrounds were conservative.  Chic costumes and hip lighting rocked.  Lights were even blacked out around performers before the scene ended, enveloping the entire house in dramatic darkness.

Visual commentaries dropped from the stage ceiling.  Dreams of a white picket-fence dropped down with a stone pathway leading to the cottage, and hoped for marriage dropped down expressed as Grieux’s parents in a wedding portrait.   What looked like a cross between a Tupperware Lady and an I-can-do-it WWII gal represented domestic bliss.  These images helped explain why Manon might prefer luxury and a life at dancing halls over love.  You wanted to get away from domestic bliss, but not when Manon sang her aria about the pleasures of a little table, "Adieu notre petite table."  For this scene, a hotel had dropped from the ceiling.  The roof and walls opened to reveal a small eating area and bedroom in which Grieux and Manon are holed up in bliss.  Charming, if confining, and very much to the point.

Filianoti seamlessly undertook the range of moods and situations.  The final reunion between Grieux and Manon is set near Le Havre in this version, instead of Puccini’s parched Louisiana, which always seems odd to Americans, who know Louisiana as very wet.  In one of opera’s most touching scenes, Dessay and Filianoti did not disappoint.  Their Act V "Ah! Fuyez, douce image", and "Je suis encore etre heureuse" were rapturous and touching.

Nothing interferes with the touching story of love challenged by material desires, a story that will last as long as we do.   The Massanet music is very French and does not have the romantic lure of Puccini, but it is lovely, and the conductor Evelino Pido brought forth its beauty and also its punch when appropriate.

What woman doesn’t want to hone in on what she wants and ask for it like Manon does.  Madonna and Lady Gaga are our modern Manons.  Different times still greet Manon’s appetites with enthusiasm, but today the perils of her choices do not inevitably lead to disaster. Material girls are thriving.  So too this opera.

Palais Garnier, the smaller, traditional French opera house, is not producing until the end of the month, but surely Opera Bastille suggests that opera is alive and well in Paris, among the old and young alike.   A superlative production of Massanet’s Manon was mounted here.  Vive l’Opera Bastille.