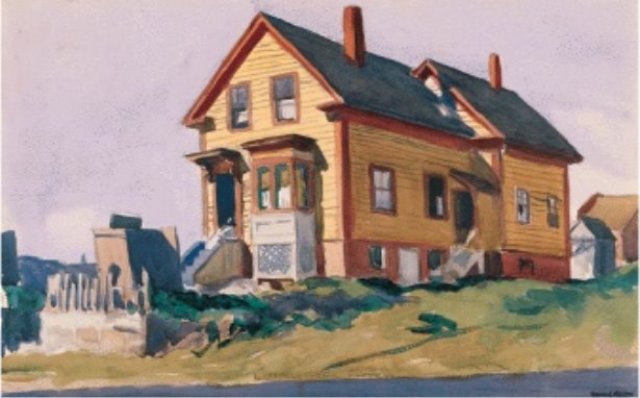 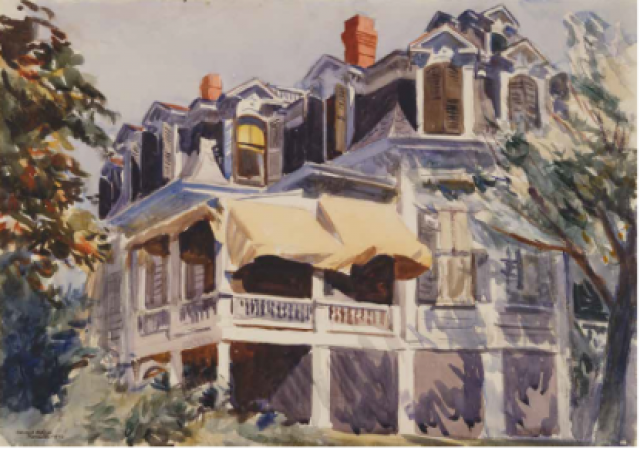 The Cape Ann Museum proudly announces the opening of “Edward Hopper & Cape Ann: Illuminating an American Landscape” in 2023, an exhibition of the critically acclaimed American artist during a turning point in his life and career when he came to Cape Ann from 1923-1928.

This major exhibition is the first dedicated to Hopper’s formative development on Cape Ann, marking the centennial of the pivotal summer of 1923 when Edward Hopper and his future wife, Josephine “Jo” Nivison, visited Gloucester. Edward Hopper & Cape Ann opens on Hopper’s birthday, July 22, 2023, and runs through October 16, 2023, and is presented in collaboration with the Whitney Museum of American Art, the major repository of the Hoppers’ work.

“This inaugural partnership with the Whitney Museum of American Art as a leading national institution is a first for the Cape Ann Museum,” said Cape Ann Museum Director Oliver Barker. “Edward Hopper & Cape Ann marks the centennial of the summer of 1923 when Edward Hopper created watercolors that earned his first critical acclaim and laid the foundation for future success as one of the greatest 20th century American landscape painters.”

The exhibition features 65 works including paintings, drawings, and prints brought together from the Whitney Museum of American Art, the Brooklyn Museum, the Museum of Fine Arts, Boston, National Gallery of Art, Washington, D.C., and 24 other institutions and private lenders to tell the story of Hopper’s formative years when he experimented with his painting technique, met his future wife, and embarked on a legendary career. The exhibition includes 57 works by Edward Hopper, seven by Jo Hopper, and one by their teacher Robert Henri.

This once in a generation exhibition, and the accompanying 225-page catalogue being produced by Rizzoli Electa, are curated by nationally recognized curator and former museum director, Elliot Bostwick Davis, PhD. “Despite painting in Gloucester in 1912 and in Maine for six more summers, Hopper initially struggled to find a distinctive artistic voice,” writes Davis. “Hopper understood that Gloucester, familiar from his earlier trip in 1912, was perhaps his last chance to make a name for himself as a painter at the age of 41. By 1923, he was supporting himself as an illustrator and etcher; his only painting sale had occurred over a decade earlier.”

Edward Hopper (1882-1967) visited Cape Ann initially at the invitation of his friend and fellow painter, Leon Kroll (1884-1974), and produced his first oil painting outdoors in the United States during that trip. The Whitney Museum is lending Hopper’s five oils painted in Gloucester in 1912, including Briar (sic) Neck, Gloucester (1912); Tall Masts (1912); Italian Quarter (1912); and Gloucester Harbor (1912). The exhibition will mark the first time these works have ever been shown together on Cape Ann.

In 1923, Josephine “Jo” Verstille Nivison (1883-1968), was an established artist, as well as an amateur actress and dancer, whose paintings had been accepted by the Brooklyn Museum, exhibited at prestigious Manhattan art galleries, and were included in a forthcoming exhibition in London and Paris. Although Hopper and Nivison knew each other from painting experiences, they met again in Gloucester and began painting together during early morning excursions where Nivison urged Hopper to paint with easy-to-transport watercolors instead of equipment-laden oils. Nivison’s beloved cat, Arthur, who traveled with her to Gloucester that summer, brought them together, when Hopper found him wandering Gloucester’s back streets and returned him.

Hopper took Nivison’s advice during their joint painting excursions. The result was Eastern Point Light (1923) followed by 17 more watercolors over eight weeks that summer including Deck of a Beam Trawler, 1923; Portuguese Church, Gloucester, 1923; House in Italian Quarter (1923); and The Mansard Roof (1923).

After Nivison and Hopper returned to New York in the fall of 1923, she lobbied for Hopper’s work to be included alongside her own in the second major biennial devoted to American watercolors at the Brooklyn Museum. The curators selected six of Hopper’s Gloucester watercolors and the Museum eventually purchased The Mansard Roof (1923) for $100. This first sale of a painting by Edward Hopper in over a decade was a major turning point in his career, thanks to Nivison and the influence of their time together on Cape Ann.

By 1924, Hopper hoped Nivison would return to Gloucester with him for another summer of painting. She wanted to return to Provincetown, where she enjoyed the camaraderie of fellow artists and theatrical types. In the end, she agreed on one condition: that they marry that day, July 9, 1924. The wedding took place and the couple returned to Cape Ann for their honeymoon and another summer of painting together. They remained married for 43 years.

“Hopper gives us an extraordinary opportunity to tell Gloucester’s story as a significant and influential place for artistic inspiration and growth,” Barker said. “The exhibition in exploring this concept of place as a creative catalyst, thanks to Elliot Davis, also recasts Jo Nivison’s role of model and muse to the producer of Hopper’s distinctive style, from the time of their courtship on Cape Ann in 1923 to the last painting to leave his easel in 1965. It’s a remarkable story, that we cannot wait to share.”

Edward Hopper & Cape Ann will be on view at the Museum’s Downtown Campus in Gloucester, and is accompanied by a robust six-part lecture series as well as a day-long symposium to be held on Saturday, September 30, 2023. Full lecture details and symposium speakers will be announced in February 2023.

In preparation for Edward Hopper & Cape Ann the Museum worked in the fall of 2022 with every eighth grader on Cape Ann to create original student work returning Hopper’s gaze through their own windows. A View from My Window, on view April 1 – May 14, 2023, will incorporate panes of plexiglass from each student, creating a visual array of sites around Cape Ann as seen by the students who live there. And starting also in Spring 2023 the Cape Ann Museum will resume its regular schedule of walking tours of sites Hopper painted while here.

Edward Hopper & Cape Ann is made possible with thanks to a visionary anonymous gift and with additional leadership support provided by: Jackie and J. J. Bell, Greg and Rose Beecher, John and Mollie Byrnes, Catherine and Peter Creighton, Henrietta Gates and Heaton Robertson, Ann Rogers Haley and John F. Haley Jr., Ann T. and John Hall, Janet and William Ellery James, Littlejohn Family Foundation, Susie and Stanley Trotman, and the Wyeth Foundation for American Art, among others. This exhibition is supported by an indemnity from the Federal Council on the Arts and Humanities. In cooperation with the Whitney Museum of American Art, New York, the major repository of Hopper’s work.