A Requiem for the End of Time in Bicentennial Year 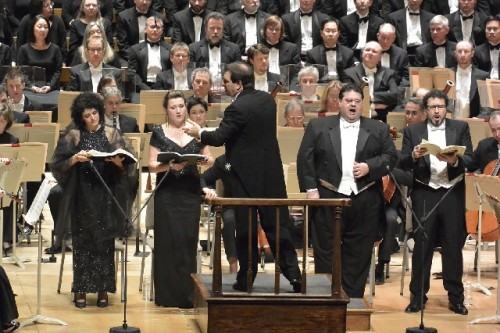 By remarkable coincidence, both Giuseppe Verdi and Richard Wagner, the two titans of 19th century opera, one representative of the Italian school, the other of the German, were both born in 1813. All over the world, the bicentenary of their births will be celebrated in opera houses and concert halls, their singular virtues and those of their national traditions once again compared and debated.

For whatever reason, the Boston Lyric Opera, Boston’s sole professional opera company, chose to mount a production of Wagner’s “Flying Dutchman” but nothing by Verdi, losing an opportunity to engage its audience in that debate. But maybe that’s just as well. The Boston Symphony Orchestra, organized by musicians devoted to Germanic orchestral music, preeminently Beethoven – look at his name inscribed above the stage – presented a version of Verdi’s Requiem that raised the hair on the back of your neck, which is the least one can expect from this harrowing work. If this be the only large-scale professional acknowledgement of the great Italian in Boston this year, we have no need to mourn for him. Although not perfect, it made the case for his greatness, ironically in a form – ecclesiastic music – that the composer seldom essayed, and only this time at such scale.

During the age of faith, the Requiem, the Roman Catholic Mass for the dead, was a form frequently addressed by composers. Its structure, a series of prayers that variously pleads and bargains with God to go easy on the recently departed, allows a variety of opportunities for the composer. By the 19th century, most composers no longer toiled for the Church and the form languished, only Verdi, Berlioz and Brahms writing significant works.

Verdi’s Requiem, written after he had “retired” from writing opera, was premiered in its final form in 1875, reaching Boston, where it was performed by the Handel & Haydn Society, in 1878. (By the way, never believe what an artist says – after the Requiem, Verdi came back to compose two of his greatest works, “Otello,” and “Falstaff,” both based on Shakespeare. If only he had lived to compose “The Tempest”!)

It is by any measure an enormous work – the stage at Symphony Hall seemed to buckle under the weight of the assembled forces – and it makes an enormous sound. Although it can be soft and lyrical when it needs to be – for instance, the lovely a cappella duet between soprano and mezzo that opens the Agnus Dei - the memory most listeners bring home from it is the harrowing intensity of the Dies Irae (“Days of rage, that day will dissolve the world in ash…”) with its pounding drums and fortissimo chorus. In this “opera in ecclesiastical costume” – the phrase is conductor Hans von Bulow’s, and it was not meant as praise – Verdi created the character, if you will, of the retributory Old Testament God of irrational rages. This God does not subscribe to Liberation Theology, he does not acknowledge an I-Thou relationship, he has no truck with a Transcendentalist sense of being one with the universe – this is a God who will damn you to Hell for all eternity if you disobey his laws. What’s remarkable is that Verdi was an atheist. He didn’t believe any of it, but he knew how to tell a good story. And what’s more inherently dramatic than the Christian myth?

Ferocious, uncompromising, Verdi’s Requiem is a Requiem for the End of the World. Maybe we can appreciate it now more than when it was written – we have witnessed several worlds end in our time and daily contemplate the imminent end of the planet.

Leading the forces was the Italian conductor Daniele Gatti, who got the orchestra and chorus to play and sing with incredible precision. In the Rex tremendae section of the Dies Irae he pulls the massive chorus to a finish as if on a dime to allow the solo bass voice to break through with the heart rending plea, “Salva me” (Save me).

Gatti, who will conduct the BSO’s Wagner concert and Mahler’s third symphony later in the season, paid extraordinarily close attention to the text. Although some of the soloists swallowed their words, the chorus sang with astonishing textual clarity. The effect was that each performer – soloist, small ensemble, quartet or massed voices of the chorus – seemed to be speaking, singing, directly to God through the listener. For such a huge work, it was remarkably intimate.

Some might fault Gatti for being too deliberate. Keeping everything under control, he allowed no room for spontaneity, for breaking free of the written notes. That’s the modern style, but some might miss a more full-throttle emotionalism, especially in such an emotional work.

The chorus was the star of the show. Collectively it created a beautiful sound, powerful or tender as required. The orchestra, always a stellar instrument, can be cruel to conductors it does not like or admire. It seemed to both like and admire Gatti and it played for him with subtlety and power. Showing his roots in the Italian brass band tradition, Verdi wrote vividly for the brass, and the horn section deserved all praise Friday night. The trumpet octet – four on stage, four stationed in the balconies – for the “Tuba mirum” (“The trumpet, scattering a wondrous sound through the tombs of every land will gather all before the throne”) were electrifying. But freed from the exigencies of staged drama, Verdi fully developed the full orchestra, creating rich harmonies that would stop cold the sweep of opera. (Something Beethoven failed to understand in his one attempt to write an opera.)

The vocal quartet should be the jewel in the crown of the assembled forces. Here it was a mixed bag, the male voices faring better than the female. Stuart Neill is a tenor in the classic Italian tradition of Pavarotti. When his clarion but sweet “Kyrie eleison” (“Lord, have mercy upon us”) broke free from the opening chorus, it was clear that we had a major voice for the evening. His “Ingemisco,” a solo soliloquy with God, begging for absolution, was meltingly sweet and beseeching, appropriate for a text that asks, “Give me a place among the sheep.”

Carlo Colombara’s bass was exemplary. Deep and resonant, it also showed flexibility many basses lack. Colombara was also extremely articulate in his enunciation of the text. He was the only soloist whose words I could fully hear and understand.

The women were less satisfying. Ekaterina Gubonova was a fine musician and a persuasive singer, but she has one of those mezzos whose voice sounds like a dense lava flow of sound. Individual notes were hit, I’m sure, but they were lost in the impenetrable wall of sound she produced, and I was unable to hear any of the words of the text she sang.

The weakest of the soloists was soprano Fiorenza Cedolins. Thin and constricted, her voice simply lacked beauty of tone. Although she always hit her notes and followed Gatti’s lead with microscopic attention, she struggled to hit the mark, especially in her lower chest voice, which was sometimes painful to hear. Unfortunately, the soprano is called upon to sing the final section of the 80-minute long work, the “Libera me” (“Deliver me, O Lord, from eternal death in that awful day when the heavens and earth shall be moved”). A work that is supposed to end with a plea delivered by a ravishing fully rounded dramatic voice instead concluded with a forced and constricted sound. In the past, the BSO has engaged sopranos of the quality of Mirella Freni, Galina Vishnevskaya and Deborah Voight for the Requiem. Too bad it could not have found singers of that caliber in this, Verdi’s bicentennial year.