Elizabeth Atterbury at the Clark 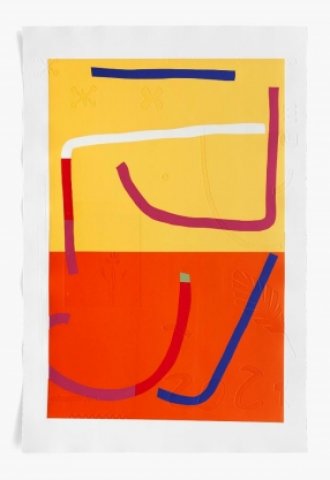 “Since we began our program of installing contemporary art in our public spaces in 2018, we have been able to introduce the work of many remarkable artists and present a unique platform for their creative and intriguing projects,” said Olivier Meslay, Hardymon Director of the Clark. “We are delighted to continue this series in collaboration with Elizabeth Atterbury, whose extremely personal works bring the past and present into a fascinating dialogue.”

Throughout her practice, Atterbury considers questions of legibility and opacity, improvisation and play, and object-making and remaking as ways to think through her family histories and Chinese American heritage.

The exhibition’s title, Oracle Bones, refers to pieces of ox bone or tortoise shell that were traditionally used in late Shang Dynasty China (second millennium BCE) for pyromancy—a practice of divining supernatural instruction through the use of fire. Diviners (the oracles) would submit questions to deities by carving them onto the bone or shell using a sharp tool. Intense heat was then applied to the bone until it cracked due to thermal expansion. The diviner would then interpret the pattern of cracks to provide answers to the questions asked.

The script carved into the oracle bones represents the earliest known form of Chinese writing—a fact first recognized by Atterbury’s great-great-grandfather, the scholar Wang Yirong. During the Boxer Rebellion, Wang was charged by the fleeing emperor with the defense of Beijing. As the futility of the cause became clear, Wang and his wife ended their lives by jumping into a well, leaving their children in the care of others. Atterbury, whose Chinese American mother died young, has made both of these fractured family narratives a focus of her work. She asks: “Can lost, interrupted, and broken stories—or the remnants from their various disappearances—regain meaning, retain it, or stumble back into it?”

“Elizabeth Atterbury is an artist deeply sensitive to the ways that everyday objects and rituals connect to memory and sense of self. Her multi-site installation, in dialogue with the architecture of the Clark, is by turns playful and profoundly affecting,” said Robert Wiesenberger, curator of contemporary projects.

Four sculptures installed in the Manton Reading Room are scaled up versions of objects that Atterbury says “carry a specific meaning and, in their remaking, undergo a change for me, becoming more known and more mysterious at the same time.”

Two massive folding wood fans, mounted to the wall, are based on one that belonged to the artist’s maternal grandmother and now hangs in Atterbury’s studio. For the artist, the fans represent the potential, realized or not, of the women in her life to unfurl and flourish, to occupy more space.

A meandering, geometric fret ornament displayed on a second-floor window ledge in the room is known in Chinese decorative arts as a yunwen and leiwen (cloud and thunder) pattern and has come to symbolize longevity.

A stone sculpture on the floor beneath the fans is an overscaled version of a “chop,” a handheld seal used in East Asia as a way of signing artworks or documents. The name on the bottom is concealed from view, as are five oracle bone fragments that Atterbury has built into the base.

Appearing on the double-height granite wall of the Clark Center’s lower level is the artist’s low relief sculpture Who am I if not from you, did you seek me, did I reach back? (2023). To make it, Atterbury transferred a drawing onto a plywood panel, cut the panel into abstract shapes with a jigsaw and bandsaw, raked mortar in different directions across each piece, and finally puzzled it all back together. This series of transformations from whole to part and back again, along with the visible gaps from lost material, reflects the artist’s interest in fractured personal and family narratives as much as questions of language and legibility. Atterbury’s interest in the formal and haptic qualities of objects and language—also present in her embossed prints—combines here with her attempts to find coherence through both making and remaking.

Atterbury used a technique known as chine collé to make the prints on view in the Clark Center’s lower level. The process uses thin pieces of paper which are run through a press on top of a thicker supporting sheet to produce a layered effect. The first word in the French term refers to China, where much of the tissue paper used in these works originated, and the second means “glued,” to indicate how the paper is secured. To achieve the embossed, low relief effect, Atterbury arranges hand cut copper plates that represent a personal lexicon of forms: abstract patterns, floral motifs, translations of her own sculptures, drawings made by her children, and objects handed down from her family. Running all this material through the press, under considerable pressure, produces an inkless, unique print known as a monoprint. For the artist, these improvised compositions are a kind of game without fixed rules: lines and shapes jostle around each other on a field of play that might resemble an abstracted tennis court or soccer field.

Elizabeth Atterbury: Oracle Bones is organized by the Clark Art Institute and curated by Robert Wiesenberger, curator of contemporary projects.

Elizabeth Atterbury is a sculptor, photographer, and printmaker who lives and works in Portland, Maine. Her work has recently appeared in the New England Triennial at deCordova Sculpture Park and Museum, Lincoln, Massachusetts; the Portland Museum of Art, Portland, Maine; and the Colby College Museum of Art, Waterville, Maine. She received her BA from Hampshire College, Amherst, Massachusetts and her MFA from the Massachusetts College of Art and Design, Boston.