Hot Tuna at the Colonial Feb 9 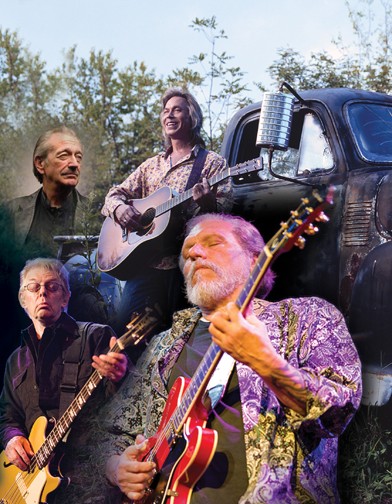 Hot Tuna will heat up the Colonial Theater.

Hot Tuna Blues is coming to the Colonial for a one-night only concert event on Wednesday, February 9 at 7:30pm. The performance joins Rock and Roll Hall of Famers Hot Tuna (Jorma Kaukonen and Jack Casady) with Chicago blues icon Charlie Musselwhite and singer-songwriter Jim Lauderdale. The acoustic and electric energy of Hot Tuna is injected with the harmonic sounds of Musselwhite and country-bluegrass infusion of Lauderdale resulting in an invigorating evening of blues and classic Americana.

Tickets are $55 and $35 and may be purchased in person at the Colonial Ticket Office at 111 South Street or by calling (413) 997-4444 or online at www.TheColonialTheatre.orgThe Ticket Office is open Monday-Friday 10pm-5pm, Saturdays 10pm-2pm or on any performance day from 10am until intermission.

No one has more consistently led American music for the last fifty years than Jorma Kaukonen and Jack Casady, the founders and continuing core members of Hot Tuna. Kaukonen and Casady met in high school, where they became friends and bandmates. When Kaukonen co-founded the Jefferson Airplane, the iconic psychedelic band of the late ’60s, he invited Casady to join. Together the duo created much of the Jefferson Airplane’s signature sound, and Jorma’s lead and fingerstyle guitar playing characterized some of the band’s most memorable tracks.

In 1996 this distinctive sound earned the pair, as well as the rest of the band, induction into the Rock and Roll Hall of Fame. While working with Jefferson Airplane, Kaukonen and Casady also continued their own separate jam sessions which eventually led to the creation of Hot Tuna. Since its creation, Hot Tuna has toured and recorded steadily for over forty years, including their current release Steady as She Goes.  Along with Kaukonen and Casady, multi-instrumentalist Barry Mitterhoff and a drummer perform both the acoustic and electric Hot Tuna programs.

Hot Tuna continuously strive to expand their sound and they achieve this by melding their skills with those of others. Joining them in 2011 for their much anticipated Hot Tuna Blues Tour are celebrated guests Charlie Musselwhite and Jim Lauderdale. Charlie Musselwhite is a captivating musician, one who laid the ground rules for playing the Blues. A monster on the harmonica, his most recent album, “The Well” is nominated for a Grammy for Best Traditional Blues Album and charted at #4 Billboard Blues charts.

Charlie Musselwhite incorporates a lifetime of experience into his music, from his early Mississippi Delta days to his immersion into Chicago urban blues and beyond. The recipient of eighteen W.C. Handy Awards and six Grammy nominations, he is firmly entrenched as an icon in musical history. Musselwhite has been awarded Lifetime Achievement Awards from The Monterey Blues Festival and the San Javier Jazz Festival in Spain, the Mississippi Governor’s Award for Excellence in the Arts, and was honored with a Mississippi Trail Marker on the square of his birthplace, Kosciusko, Mississippi.

Kaukonen and Casady both agree that Charlie Musselwhite is without question, one of the finest harmonica players who have ever lived. “His career goes back to the fields of fire that were the Blues clubs of Chicago a half a century or so ago. He has played with the masters of the blues and he is a grand master himself. Charlie is one of those rare transcendent musicians who can quite simply add his artful beauty to music of any sort. It is a rare privilege for us in Hot Tuna to accompany him as he takes us on a tour of his world. It is a double treat for us, because he will be joining us in ours as well!” says Kaukonen.

Two-time Grammy-winner Jim Lauderdale is one of the premier Americana and Bluegrass artists in music today. He hosted the Americana Awards for six straight years starting in 2002, where he won the Americana Artist of the Year as well as the Song of The Year awards. 2002 also brought his first Grammy Award for Lost in the Lonesome Pines with Ralph Stanley. His second came for The Bluegrass Diaries in 2007.

A multi-talented musician, Lauderdale is equally known for his song writing—Patty Loveless, The Dixie Chicks, Mark Chestnut, Vince Gill, and George Strait are just a handful of the artists who have recorded his songs. Lauderdale's most recent collaborations are with Elvis Costello, Lucinda Williams and George Jones. His current CD with his band The Dream Players, Honey Songs, features Jim playing with legendary guitarist James Burton and renowned session-man Al Perkins. The release led to national television appearances for the band on Late Night with Conan O'Brien and The Tonight Show with Jay Leno.

Kaukonen continues, “I have been a fan of Jim Lauderdale for, well, quite a while. Coming from Washington, D.C., my roots are deeply planted and the rich soil of traditional and evolving country music. It was quite natural for me to dig what he was doing the very first time I heard him. Jim is one of the guys who is so difficult to categorize or describe… I’ll just start with brilliant and move on from there. He has been writing hit songs for others since the discovery of rocks and water. In my opinion he is a profoundly deep writer with the ability to write songs that almost always open our gates of perception and welcome us into our own backyard. In addition to his peerless songwriting abilities, he is a truly great performer in his own right. I love his singing and playing.