M.C. Escher at the Berkshire Museum 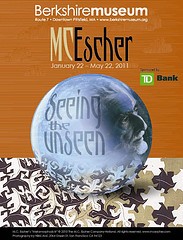 The popular Escher exhibition will be on view through May 27. 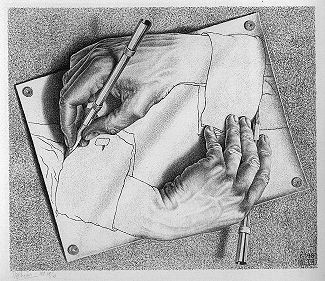 A hands on experience. 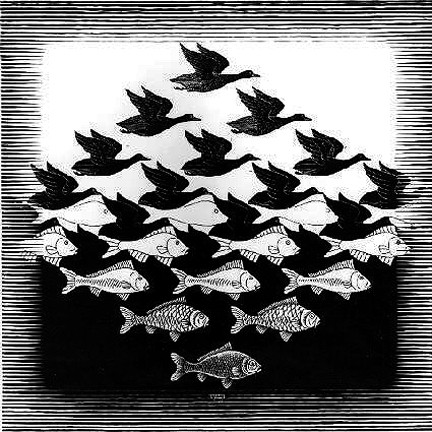 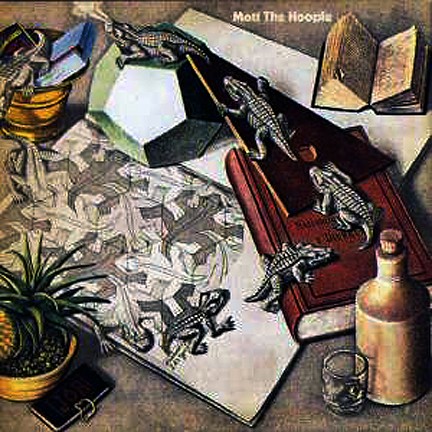 Cover for a Mott the Hoople LP. 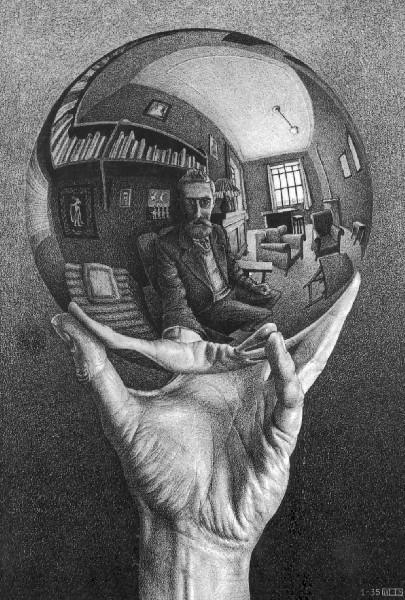 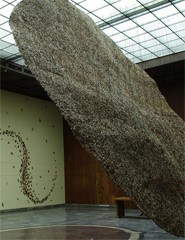 Some 800 visitors were packed into the galleries of the Berkshire Museum in Pittsfield for the opening of M.C. Escher: Seeing the Unseen which remains on view through May 22.

There is a second exhibition of contemporary relief sculptures fabricated from shredded and glued cardboard Henry Klimowicz: Constructs that is installed in several galleries including the spacious and elegant Crane Room. It remains on view through March 27.

The eccentric, mongrel Berkshire Museum, which combines displays of natural history with the fine arts and plaster casts of classical sculptures, was founded more than a century ago as a wunderkammer. This was the term for the cabinet of curiosities during the age of exploration. It was the ancestor of modern museums.

In the provinces, buried in the bucolic landscape of the Berkshires, the founders created a museum with a bit of this and a bit of that.

Rather like the South Kensington Museum in London which collected specimens from around the British Empire, as well as those paradigmatic plaster casts. It was intended to evoke inspiration for design and industry during the peak of the Industrial Revolution. It was eventually renamed the Victoria and Albert Museum. Today, better known as the V&A.

It is a horror and a treasure. You make your way through a dense warren of displays and vitrines.

It would take a lifetime to encounter all of its objects.

Rather like the Berkshire Museum which has tons of stuff from masterpieces to bric a brac down in the basement. In some ways more like a flea market or Victorian yard sale than a museum.

Which is precisely what delights and inspires the museum’s director Stuart Chase. With sanguine panache he regards all that stuff as more of an asset than a liability. He is endlessly clever and brilliant at organizing exhibitions intended to bring dusty artifacts out into the light of day.

Like all the family activity, fun, and hoopla that drew such a boffo turnout, on a witheringly cold weekend, to the Berkshire Museum.

The approach of Chase and the Berkshire Museum evokes Ethel Merman belting out “There’s no business like show business.”

In the mix of world class Berkshire museums Chase opts to zig where others zag.

The populist and wiggy Escher show is a prime example of what makes the Berkshire Museum special and different from say, Mass MoCA, or the Clark. Although it does shade into the lumpen proletariat appeal of the Norman Rockwell Museum.

With school vacations coming up soon, and families heading for the slopes, the Escher show surely will be a family destination.

For aging hippies and flower children the Escher exhibition will be an acid flash back to the era of lava lamps and tripping. You may be among those who dropped a tab and spent hours navigating through the fifth dimension of an Escher time-space continuum. His prints were the pre Avatar three-D movies of their day.

Eat Me. Drink Me.

It can take hours, no days, to unlock all the mysteries of a single Escher image.

Here there are lots and lots of them.

Beautifully installed with precision and clarity.

This is an exhibition best enjoyed with kids. What a wonder to share with them this mind boggling, delightful and absorbing experience.

Walk them through the magic where Escher turns birds into fish. Or primates into men.

Mostly I enjoyed the intricate series of views of Italian hill towns with their clusters of houses clinging to cliffs.

Surely Escher was a great artist. A master. A genius.

But in a class by himself and compared to what? In the mainstream of art history he is a curiosity. His graphic skills were on a par with Durer but in the academic world he is dismissed as more Disney than high art.

How perfect for the Berkshire Museum with its family mandate.

After the absorbing intricacy of the Eschers we emerge into a gallery of works by Henry Klimowicz. They are big and splashy.

There is more of that wow factor, so a perfect match with Escher.

This time it’s, gee kids, look what you can do with cardboard and a glue gun. Yes, you can try this at home.

The artist will be on hand to give a demonstration that is free with general admission.

There are lots of pieces on display in several galleries.

In the Crane gallery there is a Huge piece. It is an enormous circle that tilts forward and hovers over us. Pretty nifty.

On a bitter cold winter day visiting the Berkshire Museum is truly a heart warming experience.