Huntington Theatre To Present Our Town 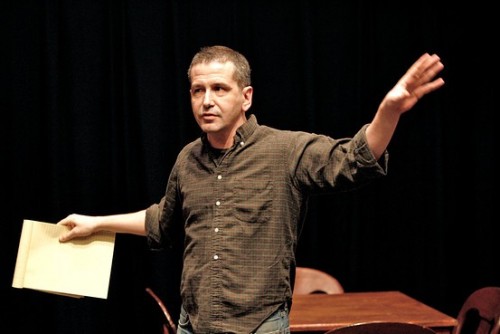 David Cromer will direct Our Town for Huntington Theater in December, 2012.

Huntington Theatre Company announces that its 2012-2013 Season will include MacArthur “Genius” David Cromer’s groundbreaking new production of Thornton Wilder’s Pulitzer Prize-winning American classic Our Town December 7, 2012 – January 13, 2013. Cromer will direct and play the Stage Manager, a role he previously performed in Chicago and Off Broadway productions.

Cromer’s revolutionary staging received critical and audience raves, earned him a 2009 Obie Award for Directing, and garnered two 2009 Lucille Lortel Awards for Best Revival and Direction. Playing for more than 600 performances at the Barrow Street Theatre after acclaimed runs by The Hypocrites in Chicago, the production became the longest running in Our Town’s history. Renowned for its transparent stagecraft, sensory experience, and the audience’s proximity to the actors, the production has been universally recognized for being revelatory yet faithful. A celebrated remounting of the production featuring Helen Hunt as the Stage Manager is currently playing to sold-out houses at The Broad Stage in Los Angeles.

The New York Times called Cromer’s production, “emotionally transcendent!” The Wall Street Journal called it, “arrestingly original” and said, “Cromer’s rethinking of Thornton Wilder’s masterpiece is a landmark! I don't use the word ‘genius’ casually, but Mr. Cromer may fill the bill. I don’t know a more gifted stage director.” The Chicago Tribune said, “David Cromer's brilliantly revisionist and astounding new production of Our Town is his masterwork to date. In the jaw-dropping third act I found myself speaking the words ‘Oh, my God’ to no one. Cancel whatever you’re doing tonight and go and see this show.”

“I am thrilled that our first production in the Roberts will be David's landmark staging of this iconic American play,” says Huntington Artistic Director Peter DuBois. “Wilder's play mines the depths of our relationship to home and community, and so I find it fitting and deeply satisfying that in addition to directing and reprising his role as the Stage Manager, David will be engaging a company of actors comprised of Boston's best talent alongside company members from his original Barrow Street production.”

Because of the extreme limited seated availability, tickets to Our Town will at first be available only to Huntington subscribers. Additional titles in the Huntington’s 2012-2013 Season will be announced in the coming months, and seated subscriptions will go on sale in March.

In 1901 Grover’s Corners, New Hampshire, teenagers George and Emily fall in love, marry, and live out their lives as one small New England town becomes a microcosm of every day life. MacArthur “Genius” David Cromer’s wonderfully intimate staging of Thornton Wilder’s beloved Pulitzer Prize-winning classic was an Off Broadway sensation, playing for more than 600 performances.

Our Town is the most produced play in the United States, and it is believed that a production is playing somewhere each day of the year. 2013 marks the 75th Anniversary of Our Town, which premiered at Princeton’s McCarter Theatre on January 22, 1938 and began performances at Boston’s Wilbur Theatre on January 25 before debuting in New York on February 4.

Thornton Wilder (1897-1975) was an accomplished novelist and playwright whose works explore the connection between the commonplace and the cosmic dimensions of human experience. He received Pulitzer Prizes for his novel The Bridge of San Luis Ray (1928) and his plays Our Town (1938) and The Skin of Our Teeth (1943). His play The Matchmaker was adapted into the record-breaking musical Hello, Dolly! He also wrote the screenplay for Alfred Hitchcock’s Shadow of a Doubt. Three volumes of his letters have been published since his death, including The Selected Letters of Thornton Wilder. Mr. Wilder’s many honors include the National Book Award, the Gold Medal for Fiction, the Presidential Medal of Freedom, and the National Book Committee’s Medal for Literature. In 2012 HarperCollins and The Library of America will publish, respectively, Mr. Wilder’s first biographer and the last of a three-volume collection devoted to his fiction and drama. thorntonwilder.com.

Since its founding in 1982, the Huntington Theatre Company has developed into Boston’s leading theatre company. Bringing together superb local and national talent, the Huntington produces a mix of groundbreaking new works and classics made current. Led by Artistic Director Peter DuBois and Managing Director Michael Maso, the Huntington creates award-winning productions, runs nationally renowned programs in education and new play development, and serves the local theatre community through its operation of the Calderwood Pavilion at the BCA. The Huntington is in residence at Boston University. For more information, visit huntingtontheatre.org