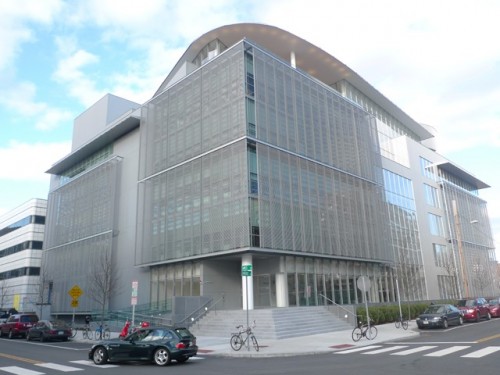 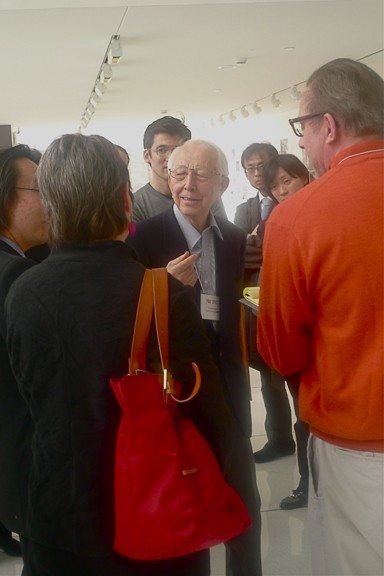 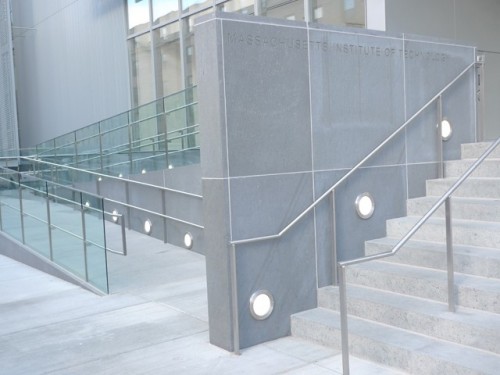 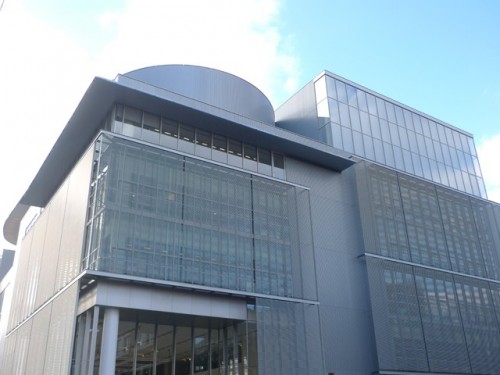 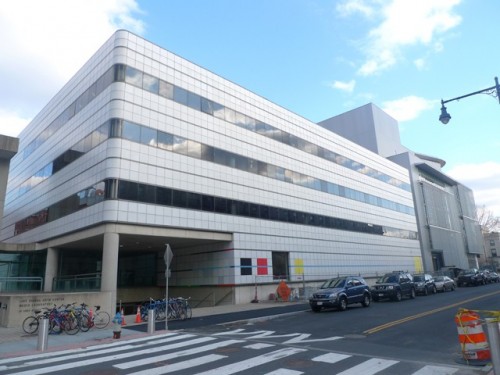 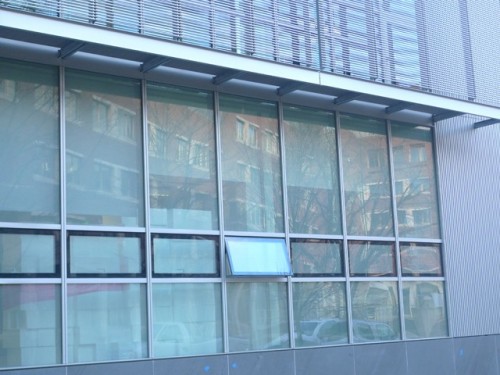 Windows that Open in the New Media Lab Building, Photo By Mark Favermann, All Rights Reserved 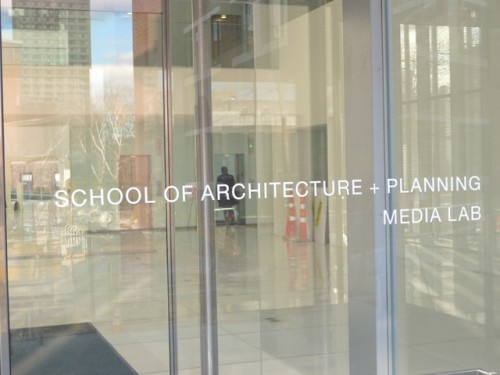 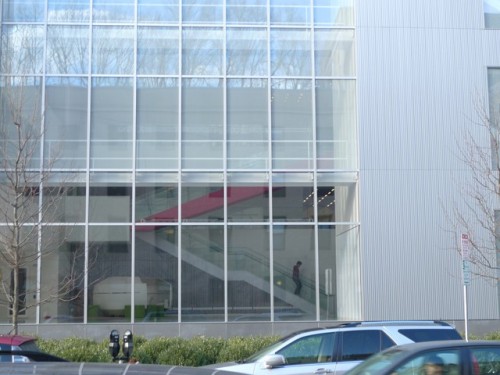 The history of MIT will refer to the Great Recession as a counter-cyclical time of construction and growth on the Cambridge, MA campus. Arguably, the greatest engineering and technological university in the world, the Massachusetts Institute of Technology is still constructing and completing buildings when other universities are not, even another prestigious one also in Cambridge.
Over the past decade or so MIT has been on a building boom. Spending somewhere around $2 billion, the jury is still out on whether or not star architects (starchitects) have delivered the goods for MIT. Two examples are the controversial and over budget Stata Center by Frank Gehry (sometimes referred to as Gehry Lite) and the oddly windowed uncomfortable under-graduate dormitory, Simmons Hall, by Stephen Holl. Both buildings are visually provocative if not smoothly functional. Less dramatic ones have been completed while others are presently under construction.
The latest MIT building that has been completed is the new Media Lab and Visual Arts Building. It is designed by another starchitect, Fumihiko Maki. It literally connects with and complements the I.M. Pei designed Wiesner Building that was opened in 1985 to house the Media Lab and other departments of the School of Architecture and Planning. The new complex includes the List Arts Center, The Center for Advanced Visual Studies, the School of Architecture and Planning's Design Lab, the MIT Visual Arts Program and the Program for Comparative Media Studies.
In addition, the building is also home for the Okawa Center for Future Children. This program was established at the Media Lab in 1998 by a major gift from the late Japanese entrepreneur Isao Okawa.
The now famous MIT Media Lab is a department within the School of Architecture and Planning at MIT. It is devoted to research projects at the convergence of multimedia and technology. It was popularized by business and technology publications and the general media during the cyber-friendlier 1990s. The Media Lab has developed something of a digital mystique around it. It developed its reputation by a series of practical inventions in the areas of wireless networks, web browsing, and software development. In recent years, it has focused more on product design that often incorporates technologies that address social causes. Media Lab projects are all sponsored by corporations or government agencies.
Considered the most influential architect of his generation, Fumihiko Maki (born 1928) is a contemporary master. His training and career were spanned both in the United States (at Cranbrook and the Harvard Graduate School of Design) and in Japan, a rarity for Japanese architects. He worked for Skidmore, Owens and Merrill as well as Sert, Jackson. His work is categorized for being spatially inventive, beautifully proportioned and carefully detailed. There is a timeless elegance to his work that is a fusion of both a Japanese sensibility and Western inspiration. Maki's work demonstrates a craftsmanship that underscores not only am intrinsic beauty but a durability. He received the Pritzker Award for lifetime achievement in 1993. In many ways, Fumihiko Maki is an architect's architect appreciated for style as well as substance.
The new Media Lab Building reflects MIT's commitment to expanding interdisciplinary and sometimes unconventional approaches to research, a hallmark of the Media Lab itself. It also reflects Fumihiko Maki's architectural philosophy. The 163,000 square foot, six story building contains atelier style, adaptable spaces that allows for flexibility to respond to future research needs and priorities. He uses light from the outside to brighten and open up the space.
Labs are spatially and visually connected inside the building. This is a transparent space full of clear and translucent glass, white walls, and polished metal. Labs are sometimes two stories high.The two open atria located in the building allow users to visually connect and perhaps even collaborate with each other in a very human way.  Bright red stairs add visual punctuation to the bright white interior. There are great views of Boston from various labs and rooms.
Maki makes elegant use of glass, stainless steel, and steel screens on the exterior of the building. The exterior is a silvery grey. His use of geometric forms is masterful. The roofline of the building is interesting and visually appealing unlike many other campus buildings that reveal utilities, generators, and airflow mechanical apparatus.
The new glass filled Media Lab is connected to I.M. Pei's rather windowless box, the Wiesner Building (1985). These are not very similar structures but their connection seems as elegant as possible. This connection is perhaps a metaphor for the integration of design and technology, art and science.
In this time of recession and academic scaling back, MIT announced last year that it would reduce its budget by $50 million in 2009 and further reduce it  by $100 to $150 million over the next three years. In this context, the MIT Administration stated, "Given our budget cuts, why are we continuing work on new buildings? All of the major capital projects (the Koch Institute, the Sloan School of Management expansion, and The Media Lab) have been under construction for more than a year and are well under way.
"All of these projects have significant gifts (and attendant obligations), and debt financing has been secured to complete funding. To suspend any of them, given how far along they are, would be extremely costly and would severely disrupt academic and research programs."

Apparently, MIT knows and does things financially that other major academic institutions do not and cannot do during this time of almost universal construction stoppage.
Under former MIT President, Charles Vest, an extensive new building construction program was set up to bring international starchitects to create buildings at MIT. The notion was that this effort was to shake up things at MIT environmentally to encourage innovation, invention, imagination and creativity.  This controversial and often debated campus architectural effort was to mirror the effort of the Media Lab to attempt to shake up and better integrate traditional disciplines of science and engineering with the emerging digital world.
Vest's advisor on the project was Professor William Mitchell who has served as MIT's Dean of the School of Architecture and Planning, Director of the Media Lab and currently as the Media Lab's Director of the Smart Cities Research Project. Mitchell is sort of the Senator Arlen Spector of the architectural world, someone with a lengthy resume appearing on every new and trendy investigative body and not really resolving much, but getting publicity for being involved.
When in 2007 a major controversy developed with the Stata Center, Mitchell was nowhere to be found. MIT sued Frank Gehry and the contractor. Mitchell had worked previously as a consultant to Gehry's firm. A few years earlier, speaking for the MIT Administration, Mitchell excused $200 million plus in cost overruns for the Stata as a function of program changes including an underground garage. Some program changes and some garage. President Vest is long retired, and Professor Mitchell is still rocking on at MIT.
Though students, faculty and administrators have been critical of Gehry's Stata Center and Holl's Simmons Hall in terms of function, the early word on Maki's Media Lab Building is positive. Several Media Lab employees questioned said that they enjoyed the open feeling of the space, the great light in the building, and the fresh elegance of the interior. A couple of individuals said that they did not like the exterior as it seemed corporate and hard, but they were happy to be out of a basement space with no windows. The light and ability to view others pleased them.
A ceremonial opening of the Media Lab Building is planned for March. The Media Lab's new home could just be an architectural winner.