The Women at the Annenberg Theatre

More Stars Than in Heaven 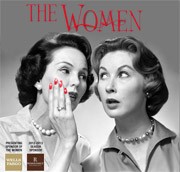 Celebrating The Women of Hollywood.

Now in its fourth year of presenting Equity productions to audiences of the Coachella Valley, the Palm Springs- based theatrical group presented a star-studded Fundraiser and a staged reading production of “The Women” at the Annenberg Theatre on Saturday, January 19, 2013.

The sold- out show featured Hollywood and TV stars on stage along side some of the Valley’s finest local actors.  As an added bonus some our best-known philanthropists and local celebrities also joined the cast making it a fun-filled evening of entertainment for a good cause.  Cheerleading in the front row was Harold Matzner, Chairman of the Board, The Palm Springs International Film Festival.

From a critic’s point of view the show was a hoot and very entertaining.  Thanks to the creative input of David Engel, the use of projection photos behind the actors indicating where the scenes were taking place was clever and effective.

It was a triumphant evening for Coyote StageWorks co-founders:  Chuck Yates, David Engel, Steve Carter, Alan Denny and Larry Raben (who was not able to attend due to a previous stage commitment).  On Friday, January 18th, following the afternoon Dress Rehearsal, Trio Restaurant treated all the cast members and their guests to its fabulous menu fare.

Following the performance, actors and audience gathered in the upstairs Art Museum for a hosted party of hors d’oeuvres, courtesy of Lulu California Bistro and all post show conversations were provided by everyone who attended the gala affair.  It was a great evening for all.

Up next for Coyote StageWorks is their production of “SUDS”.  It’s a Rocking 60s Musical Soap Opera, directed by David Engel.  The musical features Gwen Stewart from Broadway’s production of “Rent” and Bets Malone, and runs from February 7 through 17, 2013.  Following “SUDS” comes a special “Play Dates” series production starring Laurence Luckinbill in his acclaimed on-man show “Clarence Darrow Tonight!”  “Darrow” will be performed at the Annenberg Theatre, on March 10 at 2 pm and is free to the public.  Tickets become available the day of the show at the Annenberg Theatre box office.

Coyote’s last production of the 2013 Theatre Season will be Jay Presson Allen’s one-man   play/tribute to Truman Capote, entitled “Tru”, and will star Coyote Artistic Director Chuck Yates as Truman Capote.   The production directed by Larry Raben, performs at the Annenberg Theatre from April 18 through the 28, is based on the words and works of the famed novelist Truman Capote.  Capote is best known for movie versions of his novels “Breakfast at Tiffany’s” starring Audrey Hepburn and “In Cold Blood”, directed by the iconic movie director Richard Brooks, and for his many TV appearances on the old Johnny Carson “Tonight Show”.  Yates confided to me saying, “ Finally, I’m now old enough to play Capote and I can’t wait for April to get here.”

For tickets and information about Coyote StageWorks productions go online towww.coyotestageworks.org. or call the Annenberg Theatre box office at 760-325-4490.