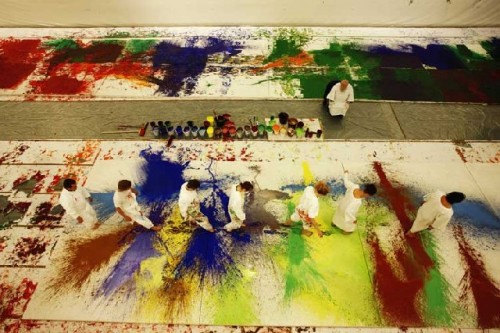 During the post war era Gunter Brus, Rudolph Schwarzkogler, Otto Muhl and Hermann Nitsch created events, or actions, that evoked responses to the violent era of the Holocaust.

One of the leaders of the Vienna Actionists, Hermann Nitsch, is planning an epic scaled event in New York. In previous actions the artist composed and performed original music.

Often slaughtered animals were used with their blood and entrails poured over nude bodies in a sacrificial, ritual manner. These events were staged over several days at his schloss in Austria.

When I visited the artist in his studio some years ago I found that he was working with red paint as a surrogate for buckets of blood. He creates enormous, splashy paintings that evoke comparison to the techniques of abstract expressionism. But with a far more intense, humanistic agenda.

Schwarzkogler commited suicide probably while taking LSD. He is alleged to have sliced off his penis as performance art.

Today the Actionists are regarded as masters of contemporary Austrian art.
What follows is the press release from Michael Weiss Gallery.

Mike Weiss Gallery is proud to host the first live painting action within the United States by Hermann Nitsch, founding member of the Viennese Actionism movement. On February 15th and 16th, the gallery is open to the public for the rare chance to see Nitsch and his assistants perform a series of ritualistic painting acts. Through their directed and unrelenting splattering, pouring, smearing, and brushing of paint, viewers see plain canvases transform into evocative, evidentiary paintings. These works are exhibited at the gallery following the performance, from February 19th through March 19th, 2011.
Rebelling against the devastating silence that typified the aftermath of World War II in Austria, Nitsch encourages the gushing, cathartic outburst of expression at its most raw and uncensored. He proclaims that to understand life, one must realize the emotional extremities that define it, from ecstatic elation to brutal sadness.
Nitsch's initial notoriety was tied to his Orgies Mysteries Theater, a series of six-day long events that he originally staged in the 1960s. The expressly honest and corporeal performances entailed the sacrificial butchering of animals and pouring of blood over the participants, who were tied naked to crossed slabs of wood recalling a crucifixion. Through the reappropriation of blood sacrifice, Nitsch echoes humanity's universal and timeless religious association of blood with spirituality, empowerment, protection, and healing.

In 1989, Hermann Nitsch transitioned his medium from blood to paint to explore the life-affirming properties of light and color. Nitsch and his assistants assimilate the indoctrination of religious ceremonies through both collective action and white robed dress. As the action takes place, the robes are stained with paint and become reverential mementos of the performance. Like relics from a bygone era, the unpremeditated final images in the exhibition are testaments of activity and remnants of a life in its full, expressive range.

Hermann Nitsch is one of the most acclaimed European artists of his generation.  He has influenced a host of artists as diverse as Carolee Schneemann and Damien Hirst. His paintings are included in several American collections including the Metropolitan Museum of Art, The Museum of Modern Art, and the Guggenheim Museum. In addition to major European museums, the Austrian government created a Herman Nitsch Museum near his home in Prinzendorf, Austria. Concurrent with this exhibition, The Museum of Contemporary Art Denver will present Bloodlines: Paintings by Hermann Nitsch from February 4th through May 29th, 2011.