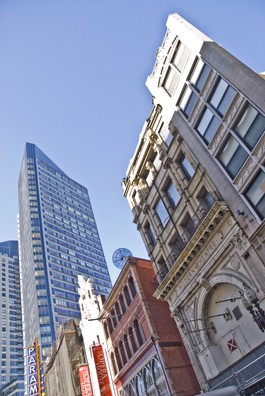 BOSTON— The Modern Theatre at Suffolk University today announced the programming lineup for its inaugural season, featuring award-winning films, innovative performances and  provocative conversations, all of which fulfill the theatre’s mission to engage the community through cultural, social, and civic programming. The following offerings will be part of the Winter-Spring Season of 2011:

Cinema series during the month of February featuring screenings and conversation with major filmmakers and writers. All events begin at 7pm and are free and open to the public.

The Modern will screen four award-winning films that were recently shown at special events in New York and Washington. Following the screenings, the audience will have the opportunity to talk, via Skype, with the filmmakers in Russia. The films include:

The Modern will welcome Boston-based novelist and screenwriter Dennis Lehane and screen the following award-winning films based on his work:

Vlada Petric, founding curator of the Harvard Film Archive will present a lecture discussing montage and special effects in Hollywood films, including excerpts from The Wall of Memories, Petric’s video essay about his own life in film.

The Modern Theatre will present the World Premiere of Car Talk: The Musical! written and directed by Suffolk University Professor Wesley Savick. Inspired by NPR’s hit radio show, Car Talk: The Musical! brings love and joy to Boston drivers. Russell D. Fenders, a hapless middle aged owner of a terminally ill '93 KIA, falls in love with Miata C. La Chassis who convinces him to go to the Emerald Garage to beg the explosive Wizard of Cahs for help.

Shakespeare at the Modern

April 9 — A reading of Thomas Middleton’s Women Beware Women, a tale of political decadence and violence, directed by Sarah Newhouse and presented by Actors’ Shakespeare Project, guests at Suffolk University during April and May.

April 11 — A reading of Robert Brustein’s play The Last Will, directed by Daniella Varon.  This is the third play of Brustein’s lively trilogy about the life and work of William Shakespeare. Robert Brustein, a celebrated playwright, critic, author and artistic director, is a Distinguished Scholar in Residence at the University.

The Actors’ Shakespeare Project present a four-week run of Antony and Cleopatra.  Shakespeare’s romantic tragedy about the powerful leaders whose love and loss created an empire will be directed by Adrianne Krstansky and will feature Elliot-Norton Award-winner Paula Plum as Cleopatra.

The Modern will present an evening of poetry and discussion with Maxine Hong Kingston, National Book Award-winning poet, memoirist, and novelist. She will speak about her latest book of poems and personal essays, I Love a Broad Margin to My Life with Fred Marchant, distinguished poet and Director of Suffolk’s Creative Writing Program and Poetry Center.

February 28 — James Carroll at the Modern

March 3 — Peter Beinart at the Modern

The series will continue on with Peter Beinart, one of the nation’s leading political writers. Beinart will discuss a topic related to President Obama and American foreign policy.

April 7 —David Hoberman at the Modern

David Hoberman is a leading producer in the entertainment industry and has made his mark on more than 100 movies for Walt Disney Pictures, Touchstone, and Hollywood Pictures. His latest film, acclaimed award-winner The Fighter, featured Mark Wahlberg, Amy Adams and Christian Bale. David is currently in pre-production for The Greatest Muppet Movie Ever Made.

This season marks the official opening of Modern Theatre at Suffolk University, the newest performance space in the Washington Street Theater District. The grand facade of the historic theater, Boston’s first designed specifically for showing movies, has been painstakingly restored and reconstructed as part of the Modern Theatre and residence hall development. Inside, an intimate jewel-box theater showcases central design elements that are a modernization of some of the most distinctive historic features of the 1914 theater.  The state-of-the-art, 185-seat venue is ideal for live performances, conversations, readings and film screenings and will promote excellence and innovation through all of its programming. For more about these and other programs at the Modern visit:www.moderntheatre.com.

Suffolk University, located in historic downtown Boston, with international campuses in Madrid and Dakar, Senegal, is a comprehensive global institution distinguished by the teaching and the intellectual and artistic contributions of its faculty.  Suffolk University offers a wide range of undergraduate and graduate programs in more than 90 areas of study.  Its mission is to provide access to excellence in higher education to students of all ages and backgrounds, with strong emphasis on diversity. Learn more at www.suffolk.edu.

Inaugural Season Calendar at a Glance

The following events are free to the public and begin at 7pm:

Screening: Year of the Dragon

Visit www.actorsshakespeareproject.org for performance times, details and tickets to these performances.

Seating for all events at the Modern Theatre is limited, and reservations are highly recommended.