Music from the Big House 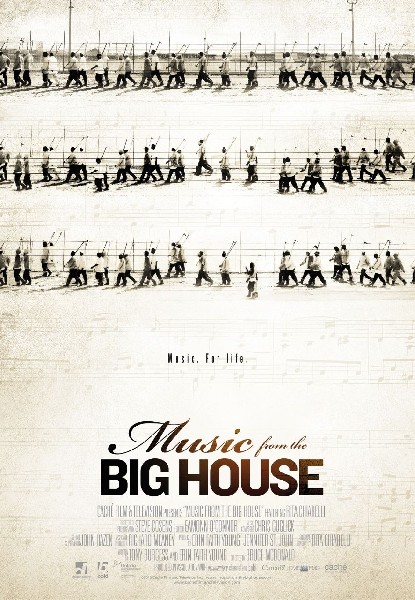 Poster for the film. 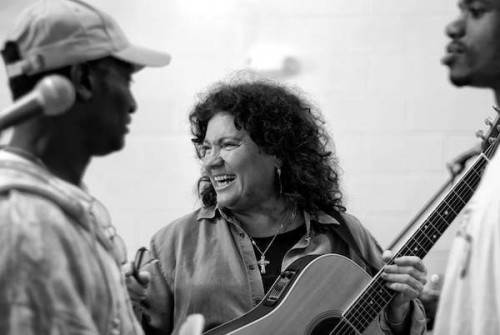 Rita Chiarelli rehearsing with the inmates 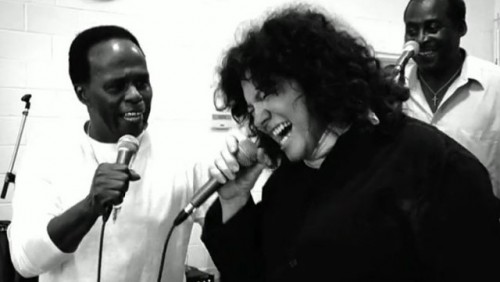 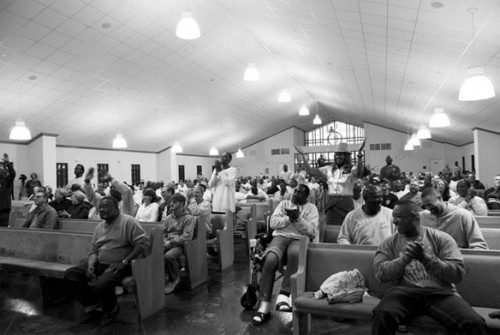 Performing for a captive audience.

The Canadian singer/ songwriter Rita Chiarelli made a pilgrimage to America’s deep south in search of the origins of country blues.

Inevitably her travels led to the Louisiana State Maximum Security Penitentiary a.k.a Angola Prison. We hear the inmates state the axiom “In Louisiana Life Means Life.”

By any definition the lifers in this poignant and insightful film, shot as a documentary in silvery black and white, are doing hard time.

The initial impulse of Chiarelli was to perform a concert for the inmates. Instead, provided with remarkable access, she got to collaborate with both black, country blues/ soul musicians, as well as several white inmates performing traditional country arrangements.

Part of her agenda was to perform with all of the musicians and participate in their range of flavors and styles.

The musicians she had access too were individuals who had adapted to prison life, were mostly reformed and devout Christians, and had earned privileges.

Because of good behavior they enjoyed conditions which by an outsider’s view were Spartan and minimal. She toured a dormitory of some fifty, narrow, bunk beds housing a hundred men. Everything was set up in a large open room with no privacy.

Each man has a single foot locker containing a few possessions.

Given Louisiana summers the room has some fans but must be swelteringly hot.

Through initial introductions and rehearsals we come to know the men. It is immediately apparent that they are truly gifted and she readily connects with them. Quickly she develops a program including some songs written on the spot.

During informal conversations the men for the most part seem low key, spiritual, and gentle. Through individual interviews we come to know their deep remorse as murderers, rapists and violent acts fueled by drugs and alcohol.

One convict compellingly weighs the impossibility of saying “I’m sorry” to the loved ones of his victims. During a parole meeting six years prior he now knows that he messed up. Instead of apologizing he sought to defend the circumstances of his actions. Sincerely, he is hoping for another chance. But also understands why the families would not want him on the street.

What does it take to endure endless, fruitless years of incarceration?

We don’t see the locked down prisoners who retain rage and violence. The film perhaps conveys false impressions by focusing on the few who have found God and inner peace.

Clearly, Chiarelli brings out the best in these men. She is entirely natural and earthy in dealing with them through the common language of music.

They deeply reach her for what she conveys as a remarkable and unexpected experience. She also states how conflicting emotions tear at her. The compassion for the inmates is measured against the harm and irreparable damage they inflicted. The victims who survived and their loved ones are also serving life sentences. Only the bars are missing.

The eventual performance is a staggering and emotionally heart wrenching climax for a thoughtful, deeply moving film.

Like Chiarelli we emerge from this vision quest with  a rich and deeper understating of the blues as a vehicle for mourning, suffering, and pleas for redemption.

The film climaxes as credits roll with all of the musicians joining Chiarelli for “Midnight Special.”

The traditional blues was recorded by Leadbelly while an inmate at Angola Prison.

“Well you wake up in the morning, hear the ding dong ring,
You go a-marching to the table, see the same damn thing
Well, it's on a one table, knife, a fork and a pan,
And if you say anything about it, you're in trouble with the man
Let the midnight special, shine her light on me
Let the midnight special, shine her ever-loving light on me
If you ever go to Houston, you better walk right, you better not stagger, you better not fight
Sheriff Benson will arrest you, he'll carry you down
And if the jury finds you guilty, penitentiary bound
Yonder come little Rosie, how in the world do you know
I can tell her by her apron, and the dress she wore
Umbrella on her shoulder, piece of paper in her hand
She goes a-marching to the captain, says, "I want my man"
"I don' believe that Rosie loves me", well tell me why
She ain't been to see me, since las' July
She brought me little coffee, she brought me little tea
Brought me damn near ever'thing but the jailhouse key
Yonder comes doctor Adams, "How in the world do you know?"
Well he gave me a tablet, the day befo'
There ain't no doctor, in all the lan'
Can cure the fever of a convict man”