Carnegie Hall is Home to A Child of Our Time 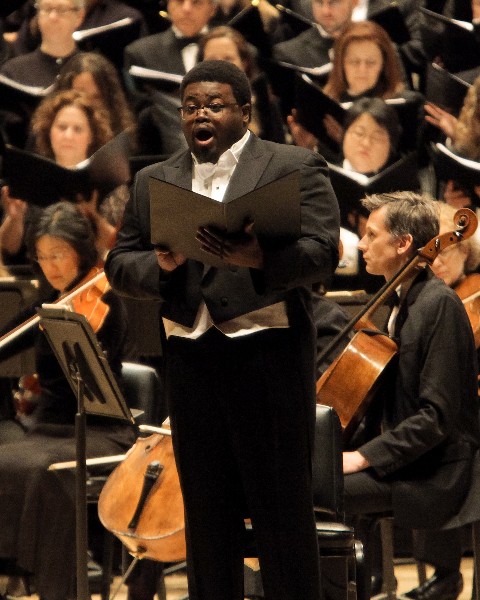 Russell Thomas, a terrific tenor, in Bruckner and Tippett 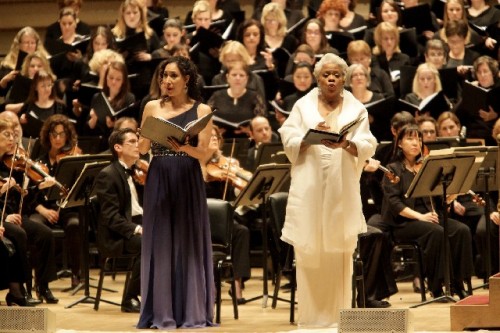 Nicole Cabell and Marietta Simpson singing at Carnegie Hall with the Collegiate Chorale.

The Collegiate Chorale brought seldom heard and important works of Anton Bruckner and Michael Tippett to Carnegie Hall.  Bruckner’s magisterial monochromatic Te Deum, which bursts into a glorious and complex heavenly embrace in its last section, was performed magnificently by the soloists, chorus and orchestra.  Te Deum both complemented and also contrasted with Michael Tippet’s A Child of Our Time.

Tippett began the composition of A Child of our Time as the German troops marched across Poland.  The title was borrowed from a story by Odon von Horvath, but as Tippett wrote the text for the Oratorio, he was swept up in the poetic imagery of Wilfred Owen and the ideas of Carl Jung.

Odon von Horvath published his version of the story in 1938, the year he escaped from Austria to Paris, where he was killed by a falling tree limb as he walked down the Champs Elysee.  He was a realist who concentrated on the social and moral problems of his age and often spiced his stories with humor, morality and satire.  However, A Child of Our Time is a downer, describing what von Horvath must have seen coming in Europe.  He did not follow closely the story of a young boy who killed a German diplomat after his family was deported from Poland to Germany, but the story echoes in the title, and also in the Tippett Oratorio in Part II.  The killing is often cited as the precipitating event for Kristallnacht, although glass would surely have been broken even if the shooting had not happened.

Tippett went to T.S. Eliot for help with the text.  Eliot, of course, is considered by some an anti-Semite, but it seems unlikely that Eliot refused to help Tippett came because he disapproved he story.  Instead, Eliot correctly felt Tippett’s own words, inspired by Owen’s poems, were perfect for the piece and worked well.

Owen, who died at 25 in the final days of the First World War, wrote lines quoted by Tippett, and which later were made part of Britten’s War Requiem.  “And of my weeping, something had been left, which must die now.  I mean the truth untold.  He pity of war, the pity war distilled.”

Patriotism felt by Owen when he entered the war at 22, was completely obliterated after he was blown into the air by a trench mortar and then trapped for days in a German dugout.  Convalescing in Ireland, he met Siegfried Sassoon, a poet who would inspire the gush of poems written when Owen returned to the front.

In the Collegiate Chorale’s presentation of A Child of Our Time, you often hear the tone of Owen’s lilting lines of Wilfred Owen lying in the background.  Tippett reacts to “the monstrous anger of the guns,” “the stuttering rifles rapid rattle,” and “the holy glimmer of goodbyes.”

Images of winter and war are joined.   Pacifist Tippett does not see peace as an end in itself.  Picking up on Jung’s ideas, he suggests that we must deal with “irrational elements in ourselves” which have to be “reckoned with, even integrated into some new synthesis.  “Armed peace’ or “War” is the symbol of this new synthesis which A child of Our Time reflects directly.

Nicole Cabell, Marietta Simpson, Russell Thomas, and John Relyea accompanied the orchestra beautifully in the Bruckner, and each presented solo arias and then sang with the chorus in A Child of Our Time.

I have never heard Cabell sound better, perhaps enhanced by the superb acoustics of the Hall.  Her voice delicately wove the often wrenching and complex text.  Just the right touch of vibrato accompanied her voice as it rang out, particularly at the top.

The concert artist Marietta Simpson, who also shone in the Simon Rattle Porgy and Bess, created particularly warm, yet affecting tones in her lower registers. She adds appropriate grit to her soft, caressing words when the text requires it.

Tenor Russell Thomas has a perfectly calibrated tenor, which fills the Hall with ease.  The voice is subtle and deeply emotional.  John Relyea, who won the Beverly Sills Award in 2009, has a burgeoning bass career and it was easy to see why.  He sits comfortably in his booming bass, and creates a startling attention call in the Tippett piece.

Some complain that the five spirituals Tippett integrated into this Oratorio do not work swallowed whole.  Yet, as the Chorale sang, the gospel songs seemed to seamlessly fit the mood of the piece.  In the uplifting quality of their music, they have always kept people trudging on even in tough times.  Stories from the Exodus, like Go Down Moses parallel not only African American experience in the US, but oppressed people everywhere.

James Bagwell conducted this challenging music, presenting its compulsive impact, pulling together the fragmentation of recitatives, arias, contrapuntal choruses and the spirituals.  He captured the collective feeling of the chorus, expressed in the spirituals, and the individual outcries of soloists, merging them in great beauty.

To pull off a combination of mythic and spiritual truths is difficult.  Bagwell got the twists, “which carried the charge of our contemporary anxiety,” as Tippett wrote.  The American Symphony Orchestra was splendid in bringing out both the melodies and the dissonance.

Owen’s lyric lines and his wrenching description of the impact of war on men are reflected throughout in the tortured texture of the oratorio, where reprieve is found in the spirituals.

Early on Owen quoted war’s justification:  It is sweet and right to die for your country.  Experience changed him, and the Oratorio articulates a resounding No.  Yet listening to this performance, we say Yes, again and again to the music.