Julianne Boyd Discusses the Impact for Her Company and the Berkshires 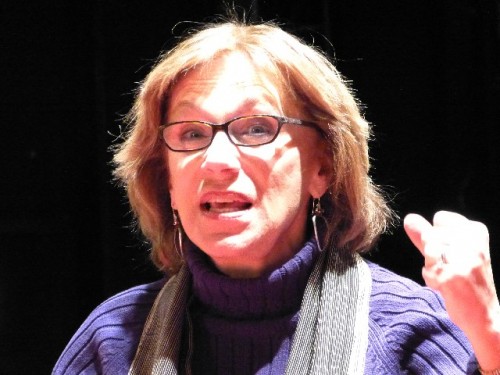 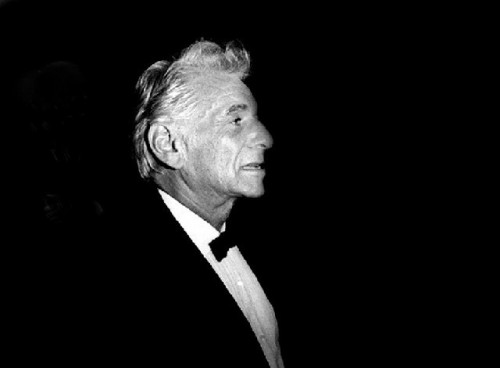 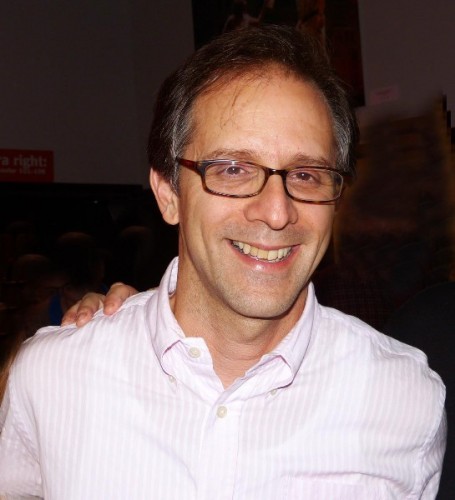 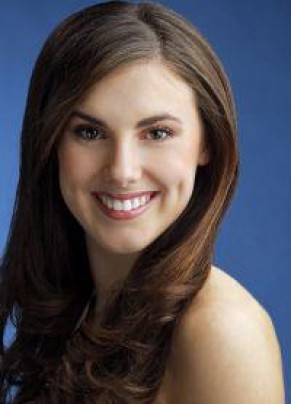 Tiler Peck of New York City Ballet has signed on to the production. 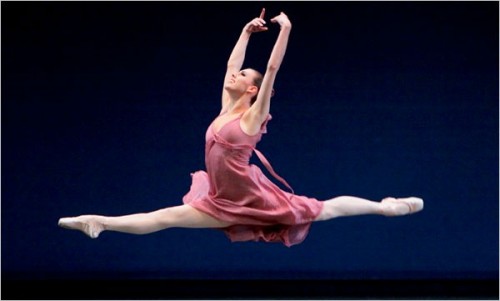 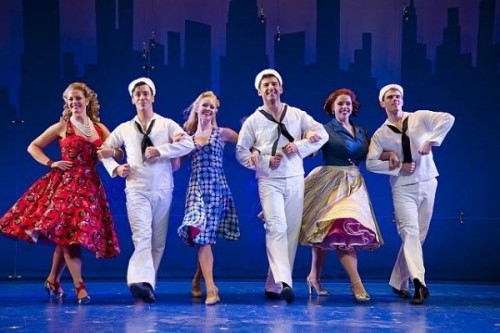 The boys are back in town. Barrington production photos. 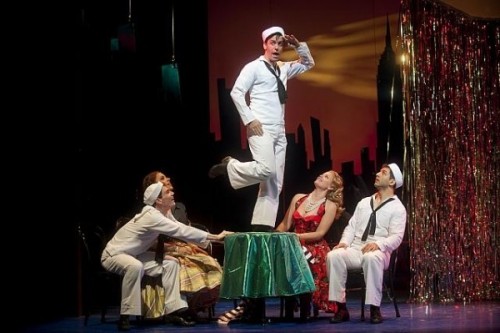 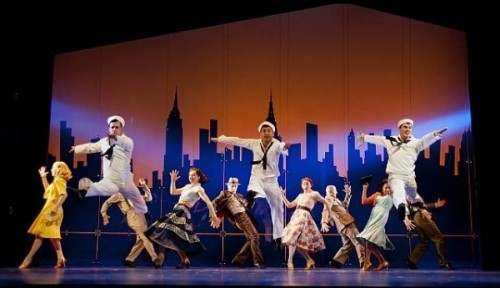 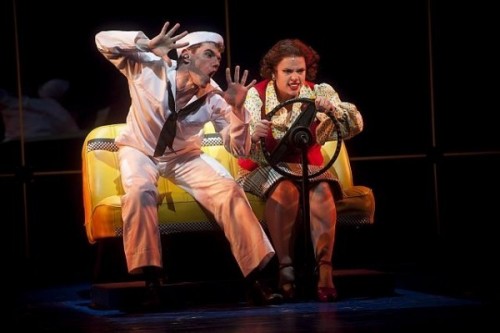 Period comedy has been reworked.

This week Shakespeare & Company announced the Off-Broadway opening of their co production of Satchmo at the Waldorf with Long Wharf. Recently, during a press conference to announce the coming season, we asked artistic director, Julianne Boyd, to comment on the trend of Berkshire shows transferring to New York. It’s nothing new to Barrington Stage but part of widening trend.

There has been a paradigm shift in how shows are developed for Broadway. The traditional system of out of town tryouts in Boston, New Haven and other cities has become prohibitively expensive and largely disappeared.

Previews on Broadway have become ever longer. In the case of Spider Man it was months before the official opening.

There appears to be an increased shift to regional theatres sending shows to Broadway which as Steppenwolf and Goodman in Chicago. We saw The Iceman Cometh at the Goodman which is slated for Brooklyn Academy of Music on its way to Broadway next season. Under Diane Paulus American Repertory Theatre has won Tonys recently for the musicals Porgy and Bess and Pippin. That’s likely to happen again this year with Cherry Jones as the lead in Glass Menagerie.

Under Jenny Gersten, who has just programmed her final season (2014) for Williamstown Theatre Festival, two of its musicals Far From Heaven (Off Broadway) and Bridges of Madison County (Broadway) have reached New York. The drama Elephant Man with Bradley Cooper is scheduled for next season.

How does that change the companies involved? To what extent does transferring productions represent a revenue stream? What are the points or percentages involved? What does it mean for the prestige of Berkshire companies to have that New York or national theatre presence?

With three companies developing work for New York does that mean that the Broadway theatre world of critics, producers and audiences approach the Berkshires with a different mind set?

Last summer On the Town was a hit with critics and audiences. What kind of changes are necessary in transferring from this smaller, intimate house with a limited stage to a full Broadway production? Are the aesthetic and technical expectations significantly different?

I never expected On the Town to transfer to Broadway.

John Rando is a friend of mine. (He won a Tony for directing Urinetown in 2002.) He did Guys and Dolls for us. He was staying at my house while doing a reading a couple of years ago.

He had his luggage and was literally going out the door when I said “Oh John, by the way, can you think of a musical for next year?”

He literally turned around and said “How about On the Town?”

It was put together at the end of that summer.

People suggest things to me. Mark Dold suggested Breaking the Code (scheduled this summer) as a role he wanted to do. Chris (Innvar) suggested other plays. Bill (Finn) suggested redoing Romance in Hard Times. Gordon Stanley suggested Golem of Havana.

I’m constantly asking my theatrical family what should we be doing?

So I don’t think of that. (Developing shows for New York.) If it happens that’s great.

For a revival like On the Town or Elephant Man (Williamstown Theater Festival) the percentage is very small. You get a very small part of it because you are licensing it. You haven’t optioned it for Broadway. We have an option for something we do as a world premiere.

You hope you get credit and a bit recognized.

Recognition in New York, and wider than New York, means that more agents want to have their playwrights here. They send us scripts for their shows. We have more access to actors. So it means that it’s quicker to get to the agents we want to reach. As far as playwrights, and actors, and so forth.

That’s the nice part of that kind of recognition.

For On the Town we had a lot of people coming up from New York because of the New York Times review.

We did end nicely in the black. But this season is not cheap. It’s a very expensive season. But it also gives the board confidence in what you want to do. They’re the ones who are raising the money.

Would we ever book a musical this year based on what we made last year? Absolutely not. The board wouldn’t allow that. On the Town was just a shot in the dark. It’s just something that happened. The show that made money like that before it was West Side Story. So you’re waiting five or six years between hits. You can never ever do that. You can’t assume you are going to get a review like that from the New York Times or whatever.

I worked six month on cutting the dated material in On the Town. We had to get permission from all of the estates. John did the cuts and I had to take it to Tams-Witmark (America's premier musical theater licensing company). It was a long time before we were able to cut that material.

So we have a producer, Howard Kagan, who’s taking it to New York.

(Maxolev Productions is the production company of Howard and Janet Kagan. The Kagans won The Tony Awards for “Best Revival of a Musical” in 2012 and 2013 respectively for American Repertory Theatre’s The Gershwin’s Porgy and Bess and for Pippin. The Kagans were also a producer of the musical Bonnie & Clyde in 2011.  The Anarchist by David Mamet in 2012; and Hands on a Hardbody by Trey Anastasio of the band Phish in 2012.)

He’s a very smart producer. He did two workshops this winter. He brought in another book writer to help. What we took out he’s adding just a few things back. We’re adding comedy back. It’s period comedy but not dated comedy. The difference is fitting it in period wise and not trying to be cool about it. Then we did a one week reading of it.

We were only able to do half to two thirds of Leonard Bernstein’s music. His “Coney Island Ballet” is much bigger. He (Howard Kagan) hired twenty dancers and (choreographer) Josh (Bergasse) for two weeks to totally do those ballets. That’s a great producer. He’s not waiting until he gets into rehearsal. I went to those workshops. There were tears in my eyes. I had never seen such brilliant dancing. They’re going with five of the six leads we had here. The only one we’re replacing is the ballet dancer because we got a prima ballerina (Tiler Peck) from the New York City Ballet to do that role. She is so divine I can’t tell you. Un-be-lievable.

Rather than rushing it because it was a big hit here he’s taking his time. If you get a great review here it’s not the same as in New York. For Broadway people are spending from $125 to $400 for a ticket. At that level people want a certain show and we don’t have any stars. If you have no stars you have to offer something different.

He (Kagan) feels what he’s offering is superlative dancing. He’s offering the best dance on Broadway.

It’s been a learning experience for us all.

Each show is different.

For Freud’s Last Session (Mark St. Germain) they took our set. They moved it there. It was the exact same show. This is totally different. It isn’t anything we think of. We just try our best to serve our audiences here. We serve the community (Pittsfield) and then the larger Berkshires.

With Kiss Me Kate (this summer) we’re calling Cole Porter a hometown boy. He had a second residence in Williamstown.