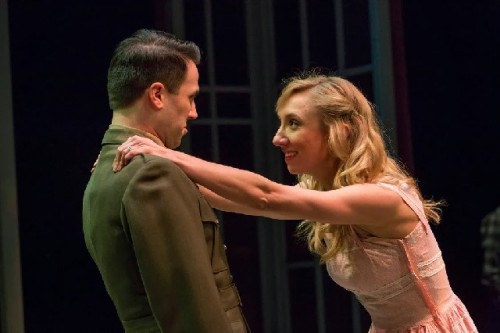 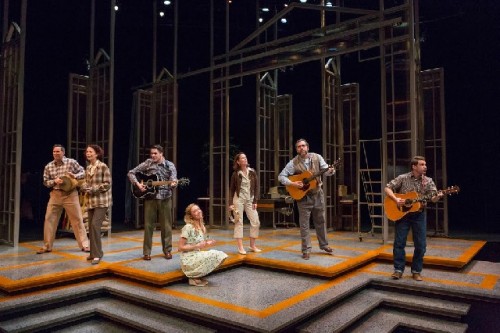 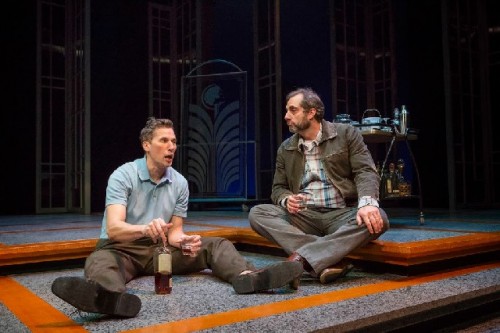 Kurt Vonnegut isn't always associated with sweet stories of love and romance. In fact, most people would assume he never wrote anything near those topics, but the Indiana Repertory Theatre's current Mainstage production features three Vonnegut short stories that are perfect for February lovebirds.

Who Am I This Time? celebrates one of Indiana's greatest writers with a sublime collection of his stories reworked as a trilogy of love stories set in a sleepy little Indiana town. Janet Allen directs with her deft hand, taking advantage of the talented musicians in the cast to provide songs as interludes between the scenes. The rollicking songs and tender ballads add a great tone to the production. The first piece is a story titled "Long Walk to Forever" which in classic Vonnegut style was originally called "Hell to Get Along With." It's about a soldier who goes home for a brief visit with his old childhood playmate.

The second title piece was my favorite of the bunch. Each member of the ensemble cast has a chance to shine, but Matthew Brumlow steals the show as the chronically shy Harry in "Who Am I This TIme?" The local community theater is putting on a production of "A Streetcar Named Desire" and he takes on the role of Stanley Kowalski. He's lost in the real world, but when he reads a script he becomes a new person. His passionate Stanley prowls the stage with a barely contained heat, yet he transforms back into Harry in an instant. Liz Kimball matches his enthusiasm as his besotted cast mate who can't seem to separate Harry from the roles he plays.

Robert Neal is the audiences' thread throughout the show, grounding us in the realities of life. He narrates the story breaking the fourth wall and explaining the back story we go along. The real romance in a relationship lies in the day-to-day love and loyalty that partners show each other, not always in the grand acts that happen on occasion. Neal's hands-on description of marriage is one of the best I've ever seen on the stage. Constance Macy helps anchor the story as his wife Kate.

The sweet play is balanced with Vonnegut's  priceless view of the world. His cynical wit seeps in, but it's tempered with a warm nostalgia. The cast works so well together, weaving in and out of the glass door filled set, wheeling props on and off as needed and having fun with every scene. The generous actors make the show a delight with their playful attitudes.

Don't miss this ode to Vonnegut from his hometown fans. Get to the IRT and learn the meaning behind the infamous phrase, So it Goes.

Don't forget about the wonderful Kurt Vonnegut Memorial Library and Indy Reads Books, both of whom partnered with the IRT for this show!

The Indiana Repertory Theatre is located at 140 W. Washington St., Indianapolis, one-half block west of the Circle Center Mall between northbound Illinois St. and southbound Capitol Ave. “Who Am I This Time" runs until Sunday, February 23 on IRT's Main Stage. Times for performances can be found at www.irtlive.com or by calling the IRT box office at (317) 635-5252. To purchase tickets call (317) 635-5252 or order online at www.irtlive.com