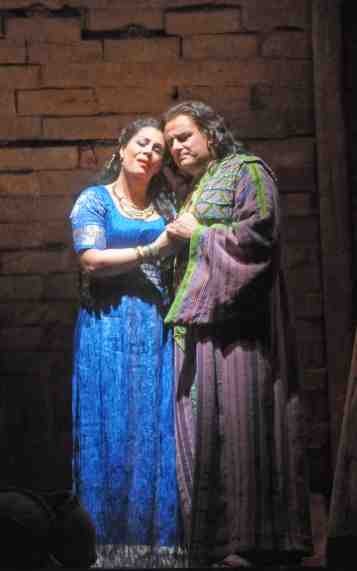 Sondra Radvanovsky and Marcello Giordani, maginificent as the ill-fated lovers. 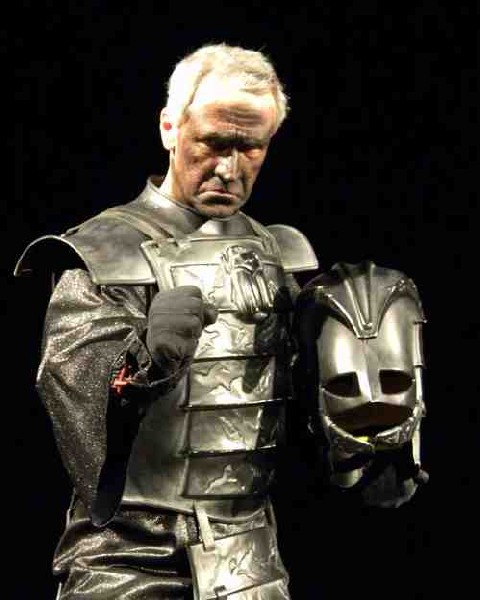 The Egyptian uniforms were impenetrable. 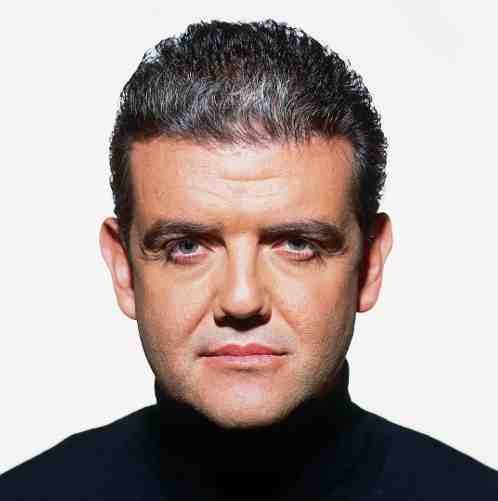 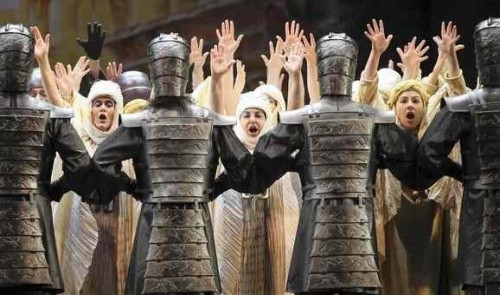 Opera at its grandest.

Aida is an intimate love triangle set into a large scale war between Egypt and Nubia.  The production at the Lyric Opera of Chicago was created two decades ago but seems fresh today, in part because its visuals are based on eternal triangles, formed by pyramids, and sets and painted scrims that recede in three-dimensions to form triangles on the distant horizon.  This production is grand opera at its grandest and most intimate, just as Verdi intended.

Grandeur is conveyed here by tall pillars, two casements that open to reveal trumpeters, and on whose steps warriors move up and down.  A cut out Pharaoh behind which red flames engulf the background provides another visual delight.  The final entombment of the lovers is also in a triangular space.

Verdi’s composition is designed to contrast the relations between three humans, all out-sized to be sure, and the plebian commoners who support them.  The chorus and dancers are dressed alike to form a block; the lower classes make a mass instead of a group of individuals.  Particularly striking were the Nubians who looked like the Blue Man group exponentially multiplied. Dancers were delightful, often striking an Egyptian pose, arms thrust up with hands horizontal, and yet supplicating.

Aida is a warhorse of an opera, each chord struck almost as familiar as a mother’s milk.  Part of the opera’s satisfaction is its very familiarity.  This provides a challenge for current interpretation, a challenge met and fulfilled with striking beauty at the Lyric.

The conductor Renato Palumbo is a Verdi specialist who is not heard often enough in this country.  Under him, the Lyric Opera Orchestra responded beautifully to this exquisite score.  Particularly noteworthy was the treatment of the dynamics, and the attention to quieter, intimate moments reflected both in the orchestra and by the singers.

As often as I have heard the great soprano Sondra Radvanovsky at the Metropolitan Opera, her performance as Aida in her hometown was a standout.  Her voice, which occasionally in the past has split in two, and her dramatic performance, which has sometimes lacked definition, were both fully realized.  Aida’s passion and the wrenching choice between her father and a lover who would have her father’s head, were affected with power and persuasion.  Her pianissimos were as unforgettable as her large, beautifully booming top notes.

Marcello Giordano is also a Metropolitan Opera favorite who soared to new heights as Radames.  With a spinto edge producing a clarion call throughout the opera house, he made you feel the magnitude of Radames the warrior.  Then he could pull back for his tender and troubled romantic moments.

The American mezzo Jill Grove has been acclaimed in Houston and Chicago, but her Amneris is a break-through performance onto the highest order of opera.  She has a large voice, which crosses seamlessly from coloratura to dramatic.

Verdi was a dramatist of the first order. Composing Aida, he kept telling his librettists to forget poetry.  Words were to convey both emotion and the political problems that arise in this story.  The stage director Matthew Lata took the original Nicolas Joel production and formed its concepts and interpretation to perfection.  While much is made of bringing a new audience to the operatic form, the only way to do this in the end is to honor the form.

Modern stage directors cannot simply deploy theatrical techniques.  This is after all opera and begins and ends with the music. Lata moves his singers to the music and helps them to display the rich emotional context of this story. The brilliance with which he does this makes the piece seem very present.

Triangles and the pyramids they signify endure and this Aida shows us why.