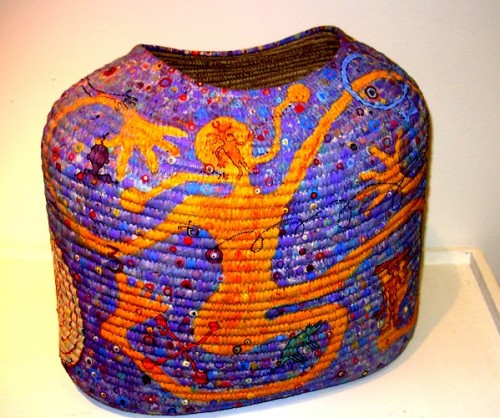 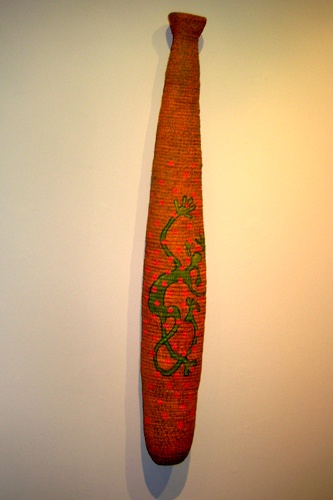 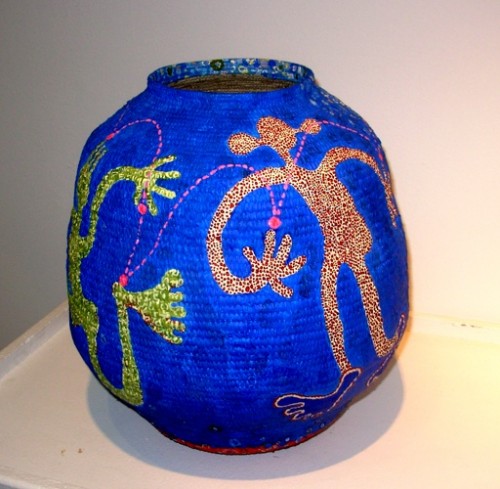 Another of her pictographic baskets. 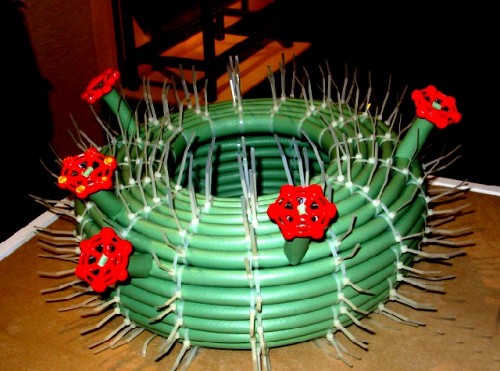 Garden hose and red faucets by Brian Jewett are combined to create a cactus. 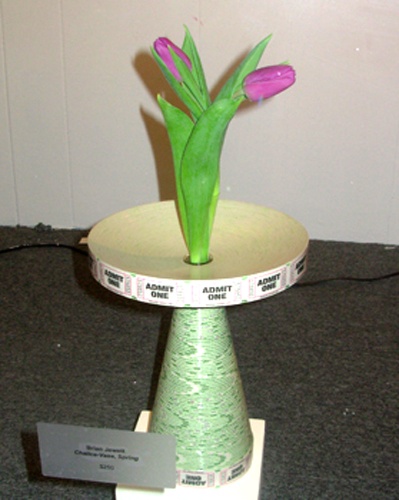 A ticket bowl by Jewett conveys a harbinger of spring. 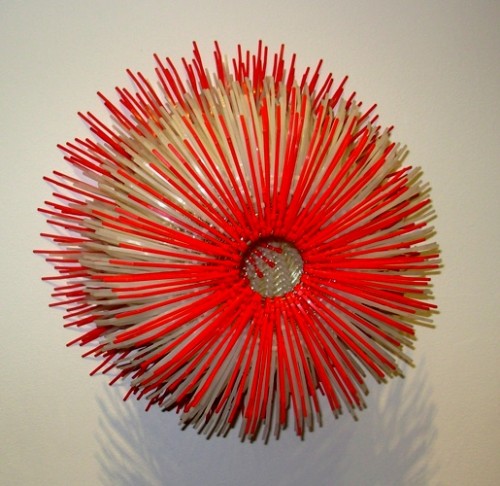 An inventive use of materials in a Jewett basket. 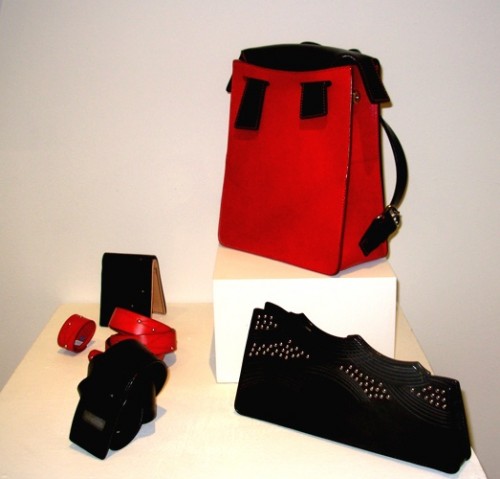 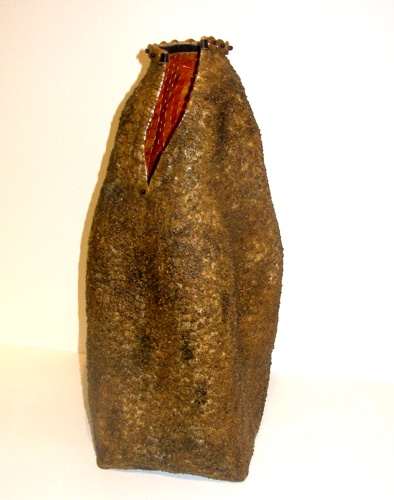 A basket by Jackie Abrams from Brattleboro, Vermont. 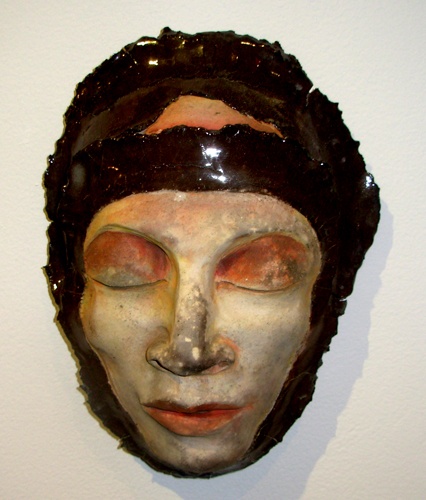 A ceramic face by Ann Clarke-Gerrity from Williamstown. 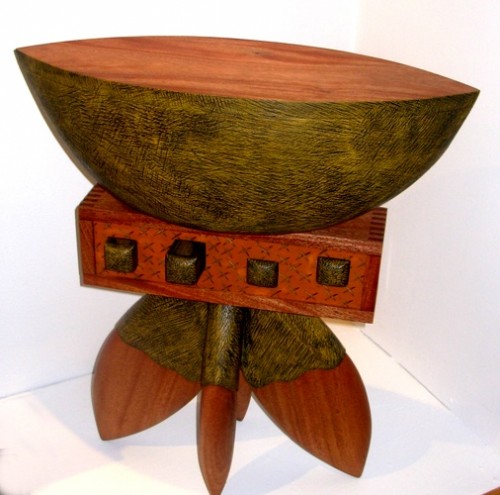 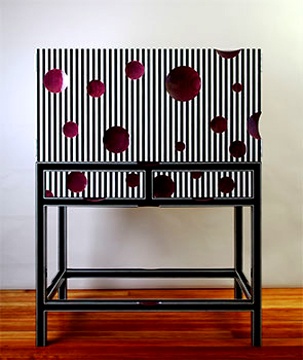 Bart Niswonger has the potential to be a star in the field of studio furniture. 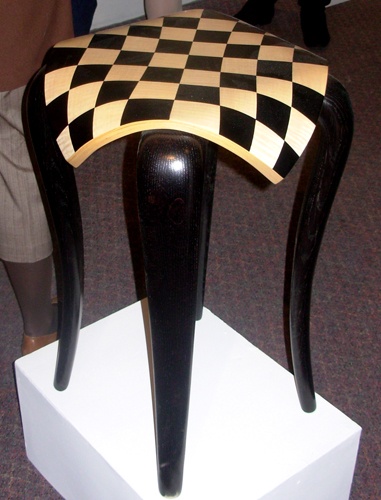 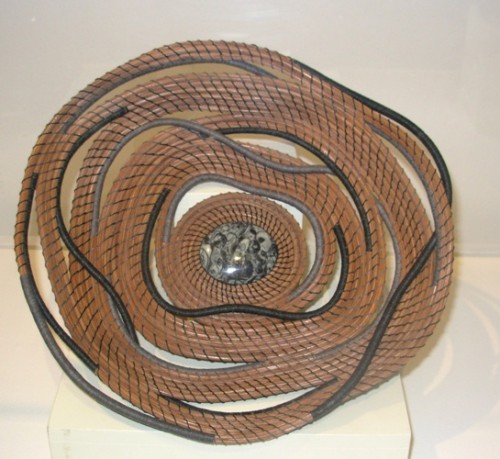 Pine needles are used in the baskets of Nadine Spier. 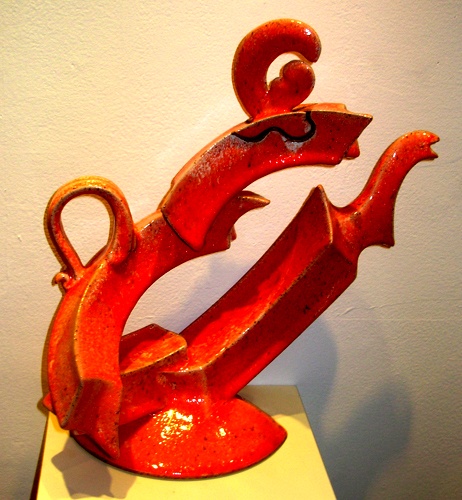 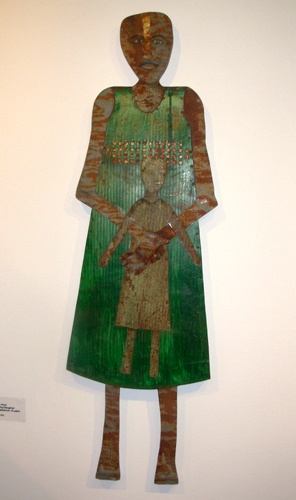 There are far too many empty storefronts and struggling businesses along Main Street and Eagle Street in downtown North Adams. Some years back the Contemporary Artists Center in the nearby Beaver Mill sponsored a summer long series of "Storefront" shows with the cooperation of local landlords. That idea was later taken up in Pittsfield where the Storefront Artists Project has attracted national media attention.

In a familiar pattern artists and galleries, who are not generally known for their business acumen, attracted by low rents in deserted commercial districts, take risks by moving in. Slowly the momentum turns as their activity generates traffic. Soon there are more galleries and other related business picks up including shops, bars, and restaurants.

This appears to be happening as Main Street is evolving into a Northern Berkshire version of Gallery Row. The local Mass College of Liberal Arts opened Gallery 51 a couple of years back primarily as a more convenient, off campus destination related to its thriving and expanding studio and arts administration program. Last fall, North Adams Antiques, operated by the artists Jane and Jeff Hudson, opened next door with a large portion of its space dedicated to shows of contemporary art.

Their business on Main Street has proved to be so lively that recently the Hudsons opened a second venue on the campus of Mass MoCA where they get far more traffic and encouraging sales even though they have started this new venue in the dead of winter. They are paying for half of the space they have on Main Street but this is more than offset by a spike in traffic and sales. But they are now dealing with the logistics of being in two places at once.

Jason Morin, a web designer for Media X Productions, has recently opened a  space on Main Street. He intends to work in the large back room studio and to use the front area, and an adjoining conference room, as a gallery featuring media and digital art.

Jonathan Secor, the arts administrator for MCLA, informed us of plans this summer to negotiate three windows in vacant properties along Main Street for art installations. Hopefully, that will bring new energy to the expanding arts scene. How long will it be before the spacious and cozy Cup and Saucer, a hangout for artists and locals, is competing with Starbucks and Dunkin Donuts?

One of the mandates for Gallery 51 is to explore resources of the local and vibrant community of artists, as well as, to provide hands on, professional experience for MCLA's students and interns. For the current exhibition "Handmade" A Look at Contemporary Crafts" the Gallery Director, Sean Riley, sought the advice of  the nationally known basket maker, Brian Jewett, who with his wife the writer, Leanne, have relocated from California and taken up residence in the Eclipse Mill just around the corner. Riley also tapped into the connections of a superb leather worker, Alicia Zaludova, who, with Martin Zalud, makes up Zalud Saddlery. Together they have assembled a lively and insightful overview of contemporary crafts, on view through February 24, that includes local practitioners and some nationally known artisans.

Perhaps one definition of what is currently displayed is a range of objects and articles that are not only beautiful to look at but also useful and functional. If you bring a fat check book, which is a good idea actually, you can walk away with unique furniture, jewelry, hand bags, baskets, ceramic objects and vessels, quilts, and wall hangings.

Since getting to know the Jewetts, a couple of years ago, we have become fans of his inventive baskets and sculptures which are assembled using a range of surprising materials. Some garden hose and red faucet handles configure into an ersatz cactus as well as a metaphor for the precious use of fresh water. A roll of tickets is transformed into a neat bowl.

Since craft is not my specialty Brian was helpful in turning me on to several major basket makers who are participating in this exhibition. Jackie Abrams, from Brattleboro, Vermont uses heavy cotton paper as a material. Her pieces seemed delicate and ephemeral. He also emphasized the significance of the use of pine needles in the intriguing baskets of Nadine Spier, a California based artisan, who has been featured on the Discovery Channel.

We first encountered the exquisite hand bags, hand stitched and designed by Zalud and Zaludova during Open Studios. They are rather expensive but probably not when compared to other designer bags. Cutting, sewing and finishing a bag takes between ten and fourteen hours. They live and work in North Adams.

There are also some wonderful and oh so tempting examples of hand crafted furniture. Bart Niswonger, of Holyoke, Mass. has only been designing and building furniture for the past five years. But the striped cabinet on a stand in this exhibition suggests that he is an emerging star in the field of studio furniture. We also enjoyed the rather tribal looking piece by Christopher Bowman who lives and works in Indianapolis. And the detailed use of wood veneers in the furniture of Peter Trumbull Crellin.

After a long slumber downtown North Adams, thanks to the arts, appears to be waking up.