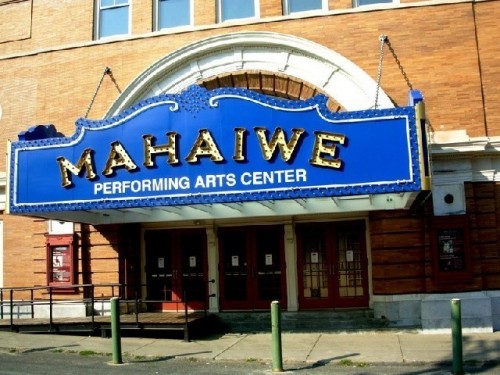 "The combination of events we're announcing for the spring reflects a range of rare opportunities I'm delighted to share with our community-A Caldecott Award-winning author talking onstage with his Berkshire-based editor about how his book became a major motion picture, one of America's bestselling humor writers, world-class Celtic fiddlers and jazz artists, Chinese acrobats, and our sixth annual performances by the Paul Taylor Dance Company. Each one is a special event and overall they offer a series of fun and intriguing experiences in very different styles-that's the Mahaiwe Mix," said Jolly.

On Sunday, Sunday, March 17 at 2:00pm, New York Times-bestselling author and illustrator Brian Selznick will talk about his Caldecott Award-winning book The Invention of Hugo Cabret and how it became Martin Scorsese's 2011 Oscar-winning film Hugo. Following a blu-ray screening of the family film, he will participate in a Q & A with his Scholastic editor, Berkshire resident Tracy Mack, and then sign books. Selznick graduated from the Rhode Island School of Design with the intention of becoming a set designer for the theater. However, after spending three years selling books and designing window displays for a children's bookstore in Manhattan, he was inspired to create children's books of his own.  Tickets are $10 (and free for Mahaiwe Members). Reservations are recommended.

On Saturday, April 13 at 8:00pm, two groundbreaking young American musicians, singer/mandolin virtuoso Chris Thile and jazz pianist Brad Mehldau, will give a rare performance as a duo. Both artists are inspired by a wide range of composers and songwriters, from Bach to Radiohead, and the duo will explore the beauty and intricacies of form and improvisation via a variety of their favorite tunes and original compositions. One of the most lyrical and intimate voices of contemporary jazz piano, Brad Mehldau has forged a unique path, which embodies the essence of jazz exploration, classical romanticism, and pop allure. From critical acclaim as a bandleader and solo artist to major international exposure in collaborations with Pat Metheny, Anne Sofie von Otter, Renee Fleming, and Joshua Redman, Mehldau continues to garner numerous awards and admiration from both jazz purists and music enthusiasts alike. Chris Thile, of Punch Brothers, has changed the mandolin forever, elevating it from its origins as a relatively simple folk and bluegrass instrument to the sophistication and brilliance of the finest jazz improvisation and classical performance. For more than 15 years, Thile played in the wildly popular band Nickel Creek, with whom he released three albums and sold two million records and was awarded a Grammy. Tickets are $25 to $47.

The Mahaiwe presents Masters of the Fiddle with Natalie MacMaster and Donnell Leahy on Sunday, March 24 at 7:00pm. Natalie MacMaster is one of the most versatile and exciting young musicians on both the folk and Celtic music scenes. Donnell Leahy is the lead fiddle and dancer with Canada's famous music and dance company, the Leahy Family. Together, the couple who are also married, Natalie and Donnell meld their virtuosities into a whirlwind of fiddle-driven music, dance, and song, combining the best of French, Celtic, and American Bluegrass and even Cajun styles and making it their own. Joined by two highly-acclaimed pianists in their own right, Mac Morin and Erin Leahy, Masters of the Fiddle delivers a powerful and energy-filled performance featuring foot-tapping rave-ups, heart-rending ballads and world-class step dancing that have brought audiences to their feet on three (and counting) continents.  Tickets are $25 to $67.

With sardonic wit and incisive social critiques, David Sedaris has become one of America's pre-eminent humor writers. He will appear at the Mahaiwe on Saturday, April 6 at 8:00pm and sign books after the show. The great skill with which he slices through cultural euphemisms and political correctness proves that Sedaris is a master of satire and one of the most observant writers addressing the human condition today. He is the author of Barrel Fever and Holidays on Ice, as well as collections of personal essays, Naked, Me Talk Pretty One Day, Dress Your Family in Corduroy and Denim, and When You Are Engulfed in Flames, each of which became a bestseller. There are a total of seven million copies of his books in print and they have been translated into 25 languages. Sedaris's pieces appear regularly in The New Yorker and have twice been included in "The Best American Essays." His newest book, a collection of fables entitled Squirrel Seeks Chipmunk: A Modest Bestiary (with illustrations by Ian Falconer), was published in September 2010 and immediately hit the NYT Bestseller Fiction List. His next book is entitled Let's Explore Diabetes with Owls and will be published April 23, 2013. Tickets are $45 to $65.

Cirque Shanghai: Bai Xi, a visually spectacular production that combines astounding Chinese acrobatics with fast-paced action and contemporary staging, will perform at the Mahaiwe on Friday, April 26 at 10:00am (school field trip performance) and 7:00pm (public performance). Dating back to the Han Dynasty more than 2,000 years ago, Chinese acrobatic spectacles were first called "bai xi," meaning "100 amazing acts," in reference to the performers' seemingly limitless skills. These daring and beautiful feats were featured in command performances for China's emperors and have been passed down and enhanced through generations. Today, "Bai Xi" brings this on-stage wonder to 21st century audiences via aerial acrobatics, plate spinning, contortion, balancing acts, hoop diving, martial arts, and more. In addition to tricks, the production features state-of-the-art computerized lighting and a fusion of traditional eastern and modern orchestration. Tickets are $25 to $35.

On Thursday, May 9 at 7:00pm, NPR's Wait, Wait... Don't Tell Me! will make its cinematic debut with an HD broadcast of its popular news quiz show beamed into hundreds of theaters across the US and Canada. Host Peter Sagal and official judge and scorekeeper Carl Kasell will be joined on-stage by panelists like Paula Poundstone and Mo Rocca to play the quiz in front of a live audience. Audience members will enjoy the familiar segments "Who's Carl This Time?," "Bluff The Listener," "Not My Job," "Limericks," "Lightning Fill in the Blank," and other audience favorites-all written around the news of the week. Tickets are $20.

Paul Taylor Dance Company returns to the Mahaiwe for its sixth consecutive summer season Friday and Saturday May 24 and May 25 at 8:00pm and Sunday, May 26 at 3:00pm and 7:00pm.The renowned modern dance company will perform the New England premiere of Mr. Taylor's Perpetual Dawn, which depicts young people experiencing the awakening of love, perhaps for the very first time. The new work is set to sprightly concertos by Baroque composer Johann David Heinichen. Other dances to be performed include Cascade, Kith and Kin, Lost Found Lost, and Offenbach Overtures.

Outside of New York City, no other community has had such wonderful access to the depth and range of Mr. Taylor's dances. Taylor Executive Director John Tomlinson said, "Our performances at the Mahaiwe have become one of the most anticipated events of our year."  See the calendar section below for the specific dances to be performed at each performance. Tickets are $10 to $75, with 25% off purchases of both programs in one order.

Opera expert Scott Eyerly gives an introductory talk about each Met opera at the Mahaiwe before its live broadcast. Mixing erudition and humor, Eyerly's lectures enhance the opera-goer's experience. All interested community members are welcome to attend these educational seminars whether attending the broadcast or not. The schedule Wagner's Parsifal  (Saturday, March 2 at 10:00am); Zandonai's Francesca da Rimini (Saturday, March 16 at 10:00am); and Handel's Giulio Cesare (Saturday, April 27 at 10:00am).  Tickets are $10 per lecture (general admission).  Free podcasts of these lectures are available after each opera on www.mahaiwe.org

The Mahaiwe will present two London's National Theatre: Live in HD broadcasts, including People, a new play by one of Britain's most celebrated playwrights, Alan Bennett, directed by Nicholas Hytner, and starring Olivier Award-winning actress Frances de la Tour on Thursday, March 21 at 7:00pm, with an encore presentation on Saturday, March 30 at 7:00pm; and This House on Friday, May 17 at 7:00pm. James Graham's biting, energetic, and critically-acclaimed new play strips politics down to the practical realities of those behind the scenes who roll up their sleeves, and on occasion bend the rules, to maneuver a diverse and conflicting chorus of MPs within the Mother of all Parliaments. Tickets are $18 to $25.

The Mahaiwe will also host a wide variety of community events presented by Close Encounters With Music, Congregation Ahavath Sholom, Town of Great Barrington, Monument Mountain Regional High School, WAM Theatre and Sisters for Peace in conjunction with the Berkshire Festival of Women Writers. The full schedule follows in the calendar summary below.

Tickets to Brian Selznick, Chris Thile and Brad Mehldau, and Paul Taylor Dance Company will go on sale to Mahaiwe Members at noon on Tuesday, February 12 and on sale to the general public at noon on Thursday, February 14. The Mahaiwe is located at 14 Castle Street in Great Barrington, Mass. Box office hours are Wednesday through Saturday from noon to 6:00pm and three hours before show times. A limited number of $15 tickets are available for patrons ages 30 and younger to all Mahaiwe-produced programs through the Mahaiwe ArtSmart Tix program. For tickets and information, see www.mahaiwe.org or call 413.528.0100.

Mahaiwe Schedule at a Glance

Saturday, March 2 at 10:00am (Pre-broadcast lecture by Scott Eyerly)

Screening:  Half the Sky: Turning Oppression into Opportunity for Women Worldwide

Presented in conjunction with the Berkshire Festival of Women Writers

Saturday, March 16 at 10:00am (Pre-broadcast lecture by Scott Eyerly)

Mahaiwe Movie of the Month

Tickets are $10 and free to Mahaiwe Members (general admission) Reservations are recommended.

An Evening with Eliot Fisk: Old, New, Borrowed and Blues

Masters of the Fiddle with Natalie MacMaster and Donnell Leahy

Mahaiwe Movie of the Month

Saturday, April 27 at 10:00am (Pre-broadcast lecture by Scott Eyerly)

This House by James Graham

The Company returns to the Mahaiwe for its sixth consecutive year with the New England premiere of Perpetual Dawn, Mr. Taylor's newest work.