A Triumphant Lohengrin at the Lyric 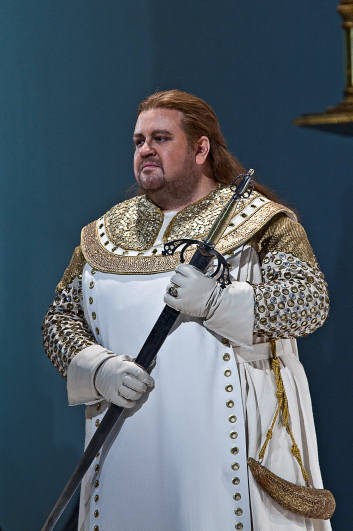 The great heldentenor Johan Botha outdoes himself in the Lyric Opera production..

Emilyl Magee in touching and mad as Elsa.

Greer Grimsley, a magnificent baritone, is both wimp and tyrant in Lohengrin.

Micaela Schuster, the bad woman is an audience favorite at the Lyric. Audiences have always loved this role.

Georg Zeppenfeld gets one of Wagner’s best creations for the bass baritone and makes the most of it.

The first performance of Lohengrin was conducted by Franz Liszt in Weimar. Wagner, considered an undesirable revolutionary, had been driven out of Germany and was living in exile in Switzerland, He begged Liszt to put on the opera, even in a small house.  Not long afterwards he wrote a critic that he had to pacify Liszt  by giving him this opportunity and Weimar may not have been the best venue.  To each Wagner gave whatever they needed to hear.  To us, as the audience, he has given a perfectly beautiful opera, throughout composed from the first articulation of Lohengrin's theme, as the prelude begins, to Lohengrin's departure as the opera ends.

Johan Botha, inarguably the first among heldentenors singing today, gives a stunning performance at the Lyric.  Sometimes he is sensitive and tireless, sometimes other worldly, and then manly and potent,  His diction is crisp and exclamations exciting.  Combined with lyricism, Botha is all one would want in a Lohengrin.

Botha is met on stage by five singers of equal stature.  Elsa, sung by Emily Magee, is wrenchingly beautiful of voice and appearance.  The movement director, Eleanor Fazan, gives her arm movements, most often reaching forward to grasp the ungraspable with touching effect.  A graduate of the Ryan Opera Center (the Lyric's professional training school) Magee is perfect in this role, with a lush soprano of high range and lovely dynamic control. From her opening narrative in "Euch Luften," to her Love Duet, and then the dark descent to her mad scene in full throttle, Elsa's dilemma is palpable.

In contrast, the Bavarian mezzo Michaela Schuster fits comfortably into the role of Urtrud, who subscribes to a pagan cult that counters the Christian grail.  With her witch-like flaming red hair and wicked intonations, she controls her husband Telramund, who collapses before the mysterious Swan Prince.  Her hardness, like Lady Macbeth’s, drives the counter story. Wagner proclaimed her 'loveless' the worst form of being in his book.

Greer Grimsley delivers the descent of Telramund from a man trying honorably to be a tool of his wife, Ortrud. He is appropriately angry, self-hating, and ferocious as his wife Ortrud works to control Elsa and drive the Swan Prince from their land.

Georg Zeppenfeld as the King, and Lester Lynch singing the Herald, round out the A list cast.  Other opera companies often forget that opera is an ensemble effort that works best when everyone is of equal talent.  The Lyric clearly executes from this sensibility, which is why their productions are so exciting.  Here, in addition to the perfect individual voices, you have lovely matches in the duets and quartets.

Wagner had dug up an old German myth and revived it.  Struggling with the opera in 1846, he writes that only the combination of the words of poetry and music can completely convey feeling.  Music can make up for what the poet hesitates to put into words; like Lohengrin’s surprise at the sight of Elsa, and the unexpected and swiftly kindled flames of love. This defines the musical drama for which Wagner is so well known.  He creates the conflict between the not so subtle admonition to knights that "the bonds of earthly love are unbecoming" and doing knightly duty.

Wagner thought the motivation should be simple, and not weakened by secondary drives.  Lohengrin has sinned by "deeming a woman’s love divinely pure."  Elsa is punished by eternal separation from her love.  She cannot die and he cannot be killed.  They both will experience this pain of separation.

The production seems more of a satisfying extravaganza than its individual parts suggest.  The three worlds depicted on stage, the Christian world of the grail, the state as a king and armies, and the pagan cults from which Ortrud arises, are represented by tall columns. They are decorated with a cross, an eagle, and pagan skulls ready for Ortrud's touch.  See through scrims divide Lohengrin's world from that of the proceedings.  Red is Ortrud's color, represented by a flaming circle stage rear, and brilliantly by the floor in the bridal suite which Ortrud's will overtakes.

Sir Andrew Davis led the Lyric orchestra masterfully, providing the through story in music.  The chorus, directed by Donald Nally, not only continued and punctuated the musical line, but visually often filled the stage when furniture did not.

Wagner's music is gorgeous, and when it is realized as it is in this Lyric production, it is an event not to be missed.

Continuing at the Lyric Opera of Chicago until March 8th.