Opera Notes from the Met

Ernani, Aida, and the Saga of the Ring Continues 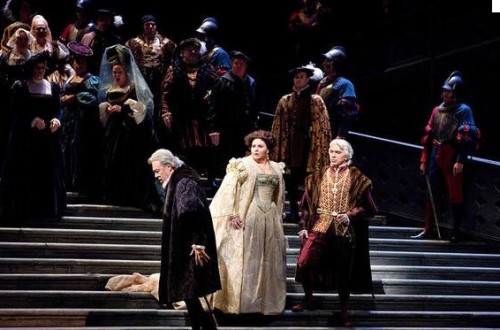 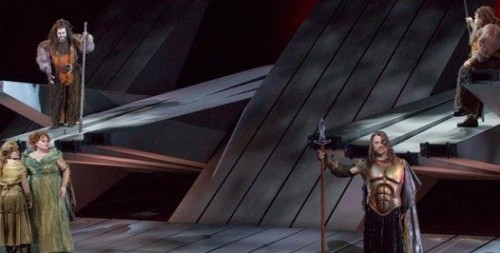 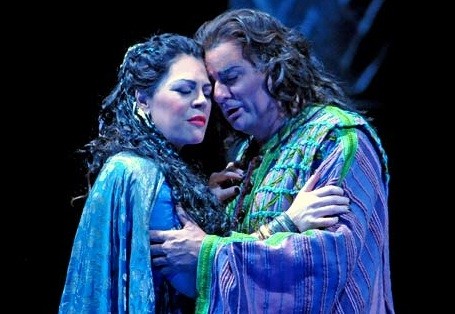 Radvanovsky and Giordani singing in Aida at the Lyric Opera.

Aida is grand opera at its grandest, and the production at the Metropolitan Opera pulls out all the stops.  Even when the great Johan Botha, whose girth seems to keep him off the Met roster these days, just stood and delivered a few years ago at the Met, he made the production fabulous.

Preference now is often for appearance over all else, although exceptions are made.  Stephanie Blythe as Amneris does not give visual competition to Violetta Urmana, who currently sings Aida, but my goodness, can Blythe sing.  Unfortunately the Met is only batting .333 in their Aida leads.  Not bad in baseball, but unsatisfactory in opera.

In the Faust cast, the fabulous Rene Pape and Jonas Kaufman were saddled with non-singer, Marina Poplavskaya, a Gelb favorite.  Pape exploded in the final performance, as Poplavskaya started to sing the "Jewel Song," he turned to the audience, and burst out audibly in English, “Diamonds are a Girl’s Best Friend.”

The Lyric in Chicago gave us a fabulous trio of singers in Aida. Sondra Radvanovsky, who is reported to have turned down a Met request to do the role, Marcello Giordani, who has been given more Met HDs than any other lead singer, but sounded best at the Lyric, and Jill Grove.

Apparently in support of the young singer Angela Meade, who someone has persuaded the General Manager will be one of the opera’s greatest ever singers if she continues on course, three wonderful stars were brought in to surround and in fact court Meade in the quadrangle that is Ernani.   The singing is so superb in this production that you forget how improbable the plot is.  Meade, who needs to be dressed to look her best, and have gowns as beautiful as her face, is well-served by the Met costume department in this Verdi role.  She moves well, up and down the stairs, and nothing detracts from her stunning vocalizations.  While some have complained that she is too advanced in her career to be an appropriate winner of the Beverly Sills Award, it was probably given to encourage Meade to continue on her already magnificent trajectory.

The LePage Ring continues to hound the Met.  A conversation overheard backstage during Walkere is particularly dismaying.  Jonas Kaufman asked LePage if he could move into the apron to perform an Siegmund aria.  He wanted to be closer to the audience as he sang.   Lepage said abruptly,  “No. The apron is reserved for Gods and Siegmund is only half a God.”

Other members of the LePage crew were overheard remarking that the music went along very well with the planks.  This suggests that one reason Luisi has taken the score slowly is because “The Machine” is not up to his speed.  As his conducting became brisker, he may simply have abandoned following the planks’ motions.

While everything could eventually be worked out, and certainly the sets of Rhinegold and Siegfried are terrific, I don’t understand why people like Gerhard Siegel, who has performed Mime over a hundred times, is not listened to.  In a panel discussion, he said he was afraid of the set.  Gelb dismissed the remark.  It is hard enough to sing opera without being afraid of the set.  Not a consideration at the Met, however.

The Met press office has announced that Marco Armiliato will conduct Rossini’s Il Barbiere di Siviglia on February 15 and an 18 matinee, replacing Maurizio Benini, who has withdrawn for personal reasons. “Armiliato, who is currently conducting Verdi’s Aida and Ernani, will now be conducting six out of seven Met performances this week. This is the highest number of performances for a conductor in a single week in Met history.”  Armiliato must have a talent for getting along with the General Manager.  He does not have a talent for keeping the musicians and singers and score together.

And so it goes at the Met, where the General Manager has many consultants who know their opera.  Arguably, he does not listen to them.