In Darfur at TimeLine in Chicago

Never Again May be Ever Again 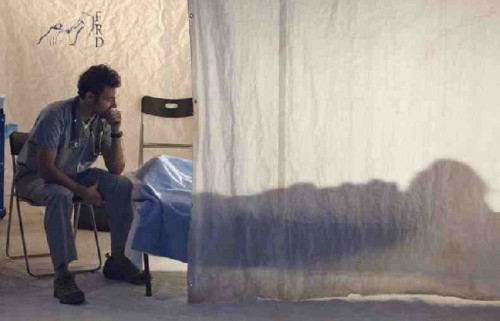 Gregory Isaac is more than a doctor in the refugee camps. 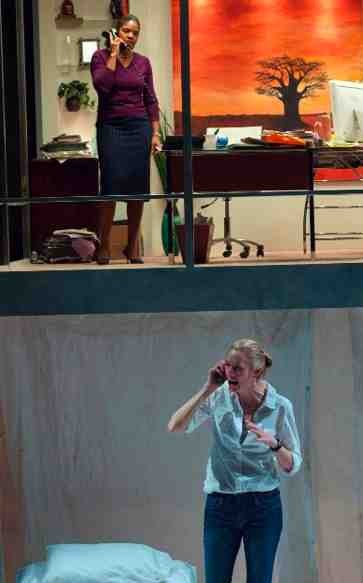 A journalist, back to the wall, discusses her story with the home office. 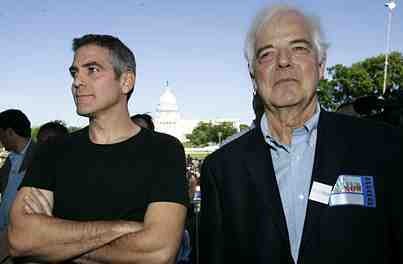 George Clooney and his father, who is a journalist, working to bring the story home from Darfur.

TimeLine Theatre Company, the Wall Street Journal's pick as the best company in the nation and produces plays based on ‘yesterday’s stories, today’s issues.’  They chose a play from contemporary history as their first show of the New Year.

Playwright Winter Miller had worked for Nicholas Kristof of the New York Times in Chad on the border of the Darfur section of Sudan.  She saw first hand how the ethnic conflict between dark Arabs and even darker Africans over scarce grazing lands. In a time of drought conflict developed into genocide.

We meet Hawa, a Darfurian woman who is burying her dead and then escapes to a camp for displaced persons.  Carlos, a doctor, is working to save lives, and Maryka, a journalist determined to capture the world’s attention and stop the genocide.

Mildred Marie Langford is riveting as Hawa, who speaks English and wants to be a journalist.  Carlos, a decent but conflicted doctor, wants to heal Hawa.  Maryka wants a front page story in the New York Times to focus attention of genocide, to give it a face to which people can respond.

Kelli Simpkins conveys a journalist chomping at the bit and frustrated by her newspaper’s demands that Hawa, who Maryka promised not to name, be named.

Maryka violates the trust and names the name.  The story gets front page play. And Hawa suffers the consequences everyone predicted.  The violent nature of her rape is shocking.

In a post play discussion, the actors who played the soldiers said that these acts were difficult to simulate.  Langford said performing this part has inalterably changed her.  The play changes us too.  And that is both the playwright’s and Timeline’s intention.

What Miller as a playwright has done in telling Hawa's story on stage is to move us mightily.  In these difficult economic times, can people take the time to worry about distant problems when food and rent are so difficult to get?  Will our politicians take on this issue?

We have watched movie star George Clooney fight to get attention for the very same issue - testifying before Congress, being interviewed on television, visiting the Oval office.  Clooney went to Sudan with his father, a journalist, and brought the message home.

After the concentration camps, we said “never again.”  Yet we can't seem to find a way to stop genocide, even with celebrity attention and New York Times front page stories. Whether this is because Africans seem marginal to us, or because we are numbed by the cascade of violent images on television, some combination of both, or reasons we can’t grasp. remains to  be seen.

The creative ensemble mounting this production have a commitment beyond the message to produce a good play.  The evening they present is compelling.  It will also be a long time before I forget the images of this production, particularly those of the riveting actress Langford.

Mike Tutaj’s video projection give us a graphic feeling for the bleak Sudanese landscape, the sandy, empty land dotted with ever more and ever larger refugee settlements vividly portray the plight of tens of thousands of men, women and children.

When Hawa says that she does not want to leave her country, we understand a native's dilemma.  No matter how bad it is, Polish Nobel Laureate Czeslaw Milosz wrote often that we deeply love home and do not want to leave, no matter what the conditions.

Conditions need to be cured.  Is help coming to Darfur?

While the international world was focused on the referendum,  the United Nations-African Union mission reports that over 40,000 people were displaced in December alone because of fighting between rebel and government forces, both of whom, Human Rights Watch reports, have been targeting civilians based on their ethnicity.

The genocide will continue with or without the southern Sudanese oil.  What will we do?  As sober as the question is, this play is enormously absorbing because we feel so strongly the dilemma of a beautiful, intelligent woman who is trapped.  The play is sure to help women like her -- at least a little..  In Darfur engages us completely.