Steve Van Zandt On the Lam in Norway 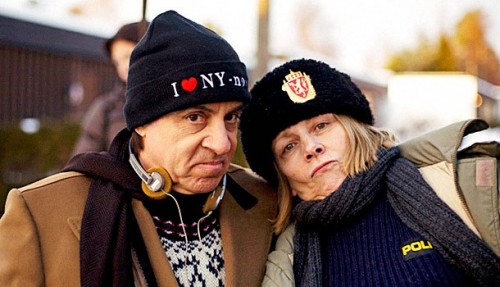 A mobster in the land of ice and snow.

During the recent Grammy awards we caught glimpses of him with a signature scarf covering what one assumes is a bald head during the opening set by Bruce Springsteen.

Lumbering about Van Zandt, arguably a shadow of his formerly svelte, snarling, youthful self one never knows whether to laugh at or with the Jersey guy.

Even the Boss looked thicker in girth and slower in step.

Time does make cowards of us all but that’s particularly devastating to rock stars.

What rescues Van Zandt from the rock ‘n’ roll scrap heap is his perennial humor, irony and gift for parody.

That, plus truly terrible wigs, were qualities that made him so enduring as Silvio Dante in The Sopranos.

the mild mannered mobster and owner of the strip club the Bada Bing. Compared to Tony and the rest of the thugs, with a shirk and shrug, Silvio could wax philosophical about The Life. But also track down and execute the informant Adriana the twist of Christtttopha as she comically pronounced his name.

Despite that stunning blackout at the end of the HBO series it appears that there is indeed life after The Sopranos.

At least for the lovable Silvio.

Not as Silvio, God forbid, may he rest with the fish forever.

But as another made man Frank Tagliano. Who, during the opening scene of a new series Lilyhammer for Netflix, its first original content,looks and acts, forgive me, just like Silvio.

We find him standing over a coffin. The Boss is dead. But as Underboss he has been passed over. The new Don, as Frank says to his face, is nothing but a bean counter and unfit to lead the mob. No disrespect.

Later, seated at the bar in the joint he owns, thugs try to shoot him.

Frank agrees to rat on the boss under his terms.

Not feeling safe in the U.S. he demands witness protection in Lillehammer.

The riff is a mobster in Norway.

Yes, there are absurdly comic implications.

Van Vandt is a great sideman with Springsteen and supporting actor for the Sopranos.

But as the lead?

To build not just a show but two seasons around?

In Lilyhammer as a Jersey mobster he is a fish out of water.

Seeing him function, or not, in a land of ice and snow has its moments.

But the two episodes I endured just plodded along.

Probably, because I’m a glutton for punishment, I’ll see the rest.

At least the remaining six this season.

Hopefully I’ll find something better to do with my time.

The Mafia in Norway?