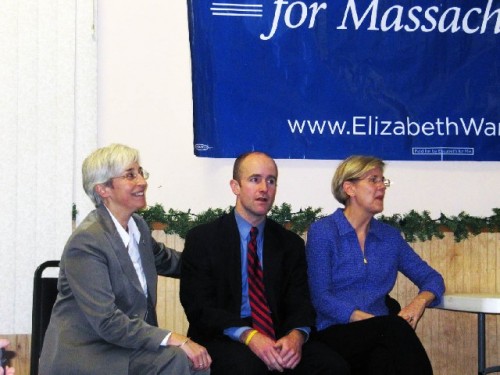 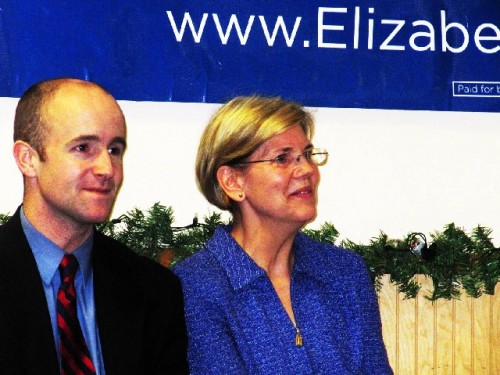 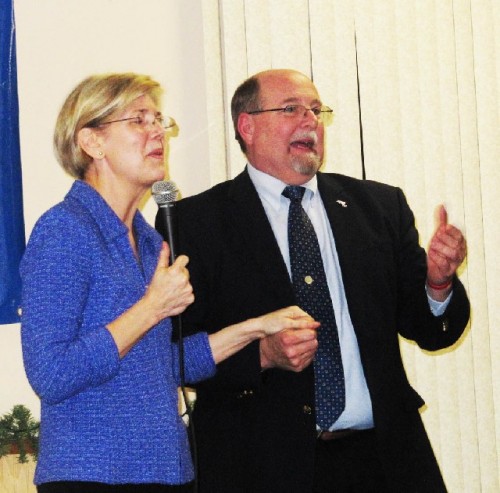 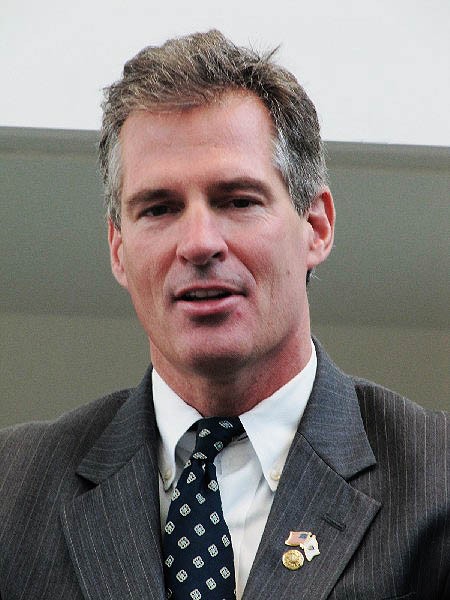 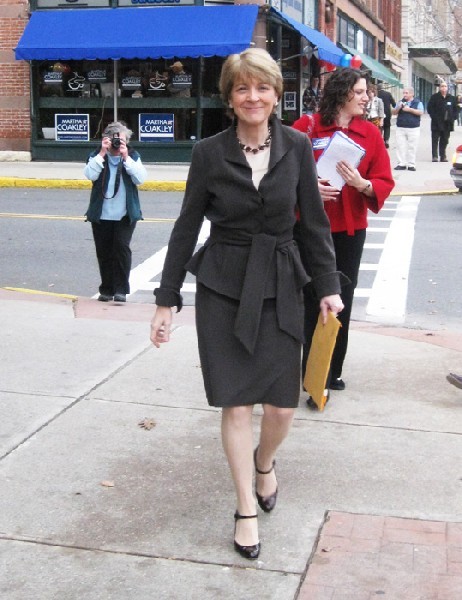 Martha Coakley’s campaign was on cruise control when she prowled the streets of North Adams. 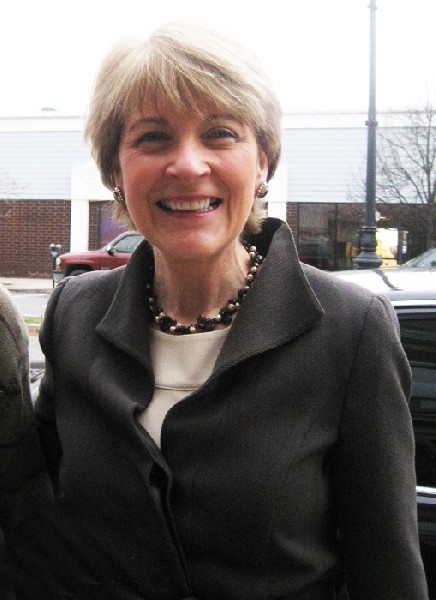 Coakley turned on the charm but was running on vapors. 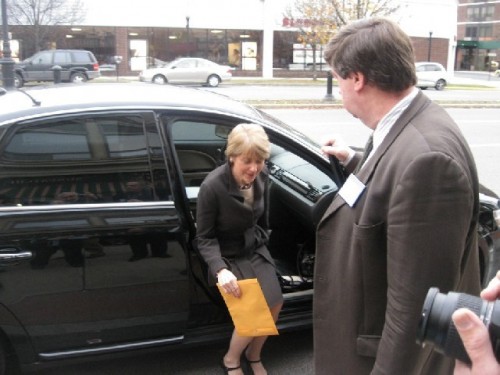 Escorted out of town by ousted Mayor John Barrett III. 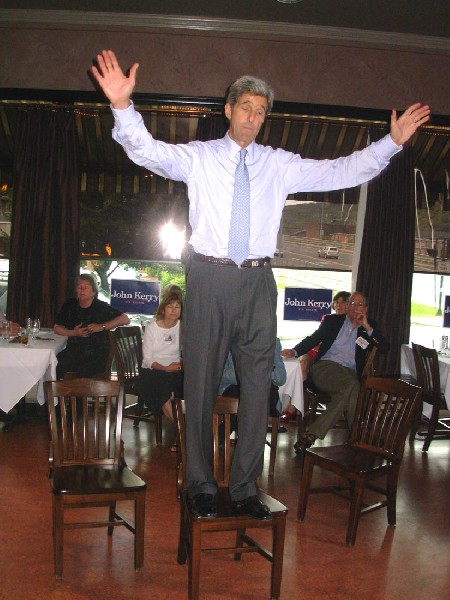 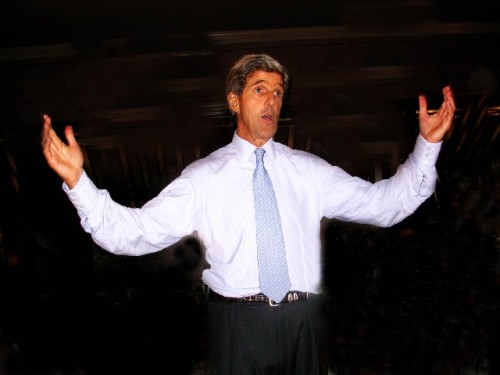 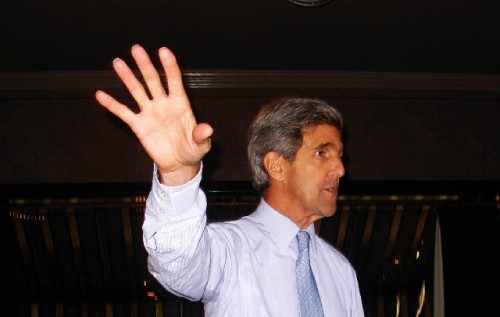 Kerry demonstrating that he is a hands on politician. 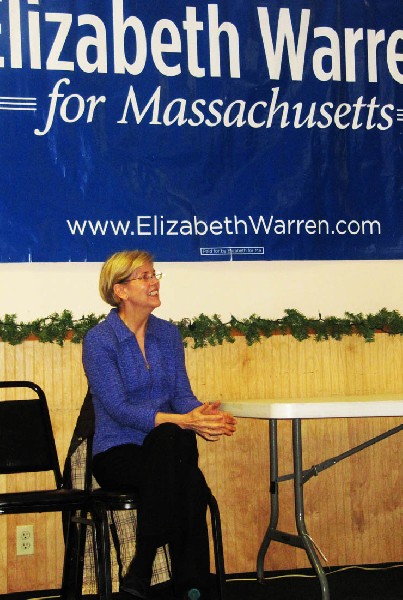 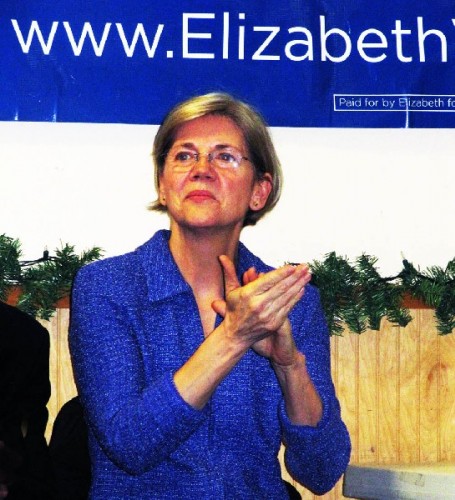 Responding to her introduction. 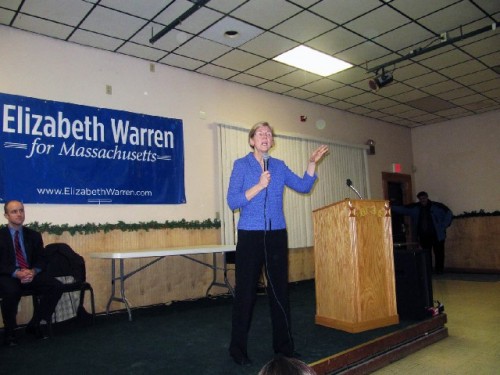 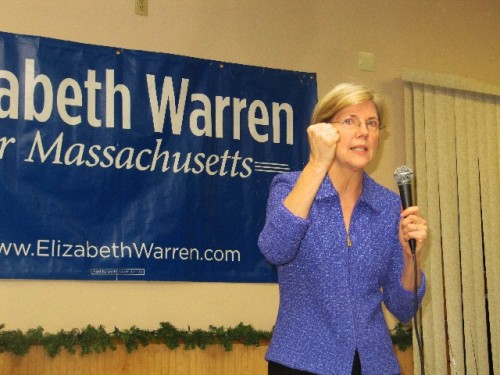 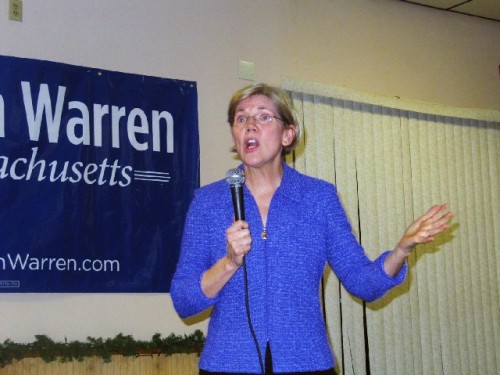 Discussing a future for America. 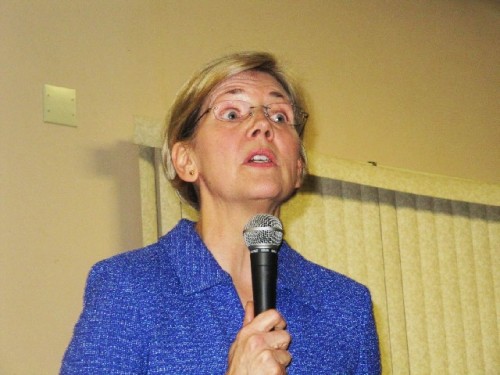 Making her case to potential voters. 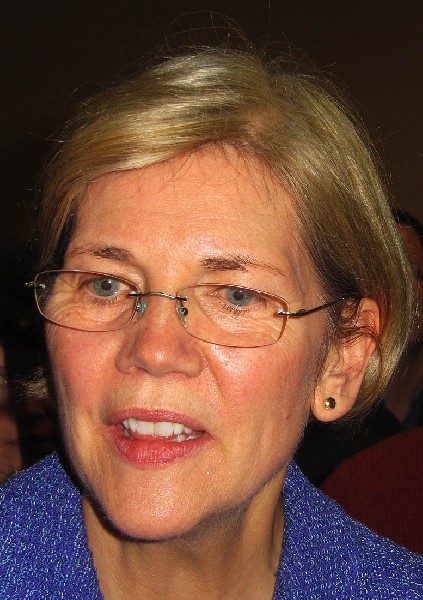 Getting her message across. 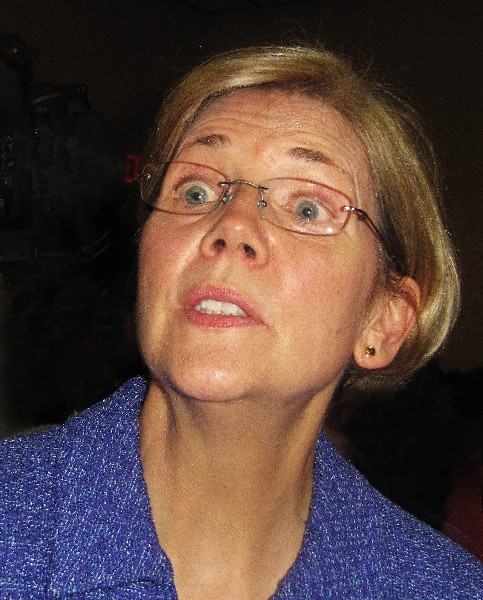 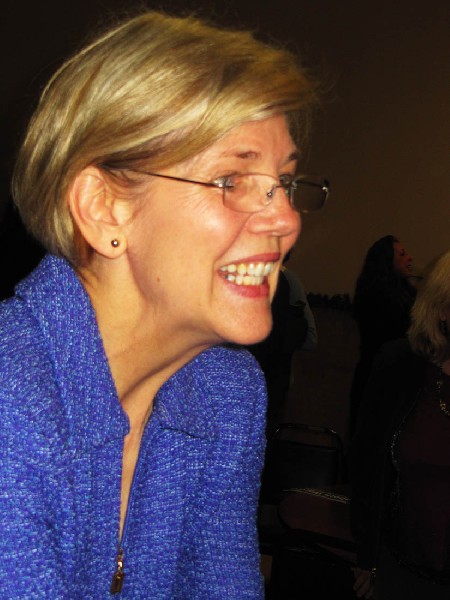 Reaching out to voters. 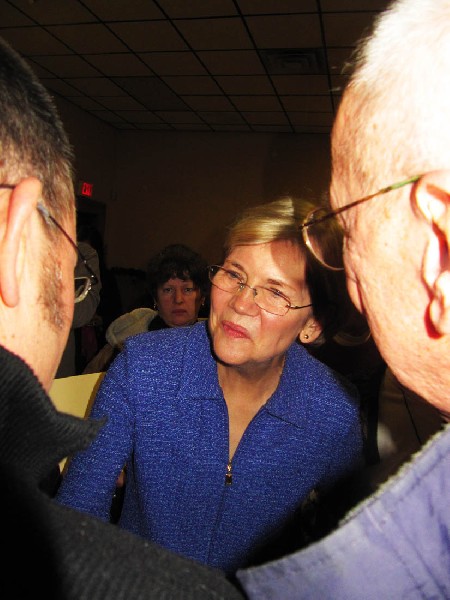 Massachusetts Democrats were shocked and in a state of denial when Scott Brown came out of nowhere to take the Senate seat vacated by Ted Kennedy. Since then Brown, a populist, has postured to present himself as a moderate Republican serving a traditionally liberal Democratic state.

In an energized stump speech Elizabeth Warren, who opposes Brown, noted that she is not a career politician. She described herself as coming from a struggling middle class family, married at 19, and nine months pregnant with her second child when she graduated from law school.

On the podium with Warren were North Adams Mayor Richard Alcombright, state Sen. Benjamin Downing, D-Pittsfield, and state Rep. Gailanne Cariddi, D-North Adams, all of whom introduced her.

She expressed empathy for “bootstrappers” like herself struggling to work their way through state colleges.  In addition to Federal cuts for research impacting universities tuition  and fees have risen 350% in the past 30 years. Warren is a specialist in economics which she teaches at Harvard Law School.

"I am the daughter of a maintenance man who became this fancy pants professor at Harvard,” she stated in a presentation that sought commonality with her grass roots, Berkshire audience as well as presenting formidable credentials.

Compared to China, and Europe she descries that America is slashing government support for crucial infrastructure, basic research leading to new products and jobs, and the erosion of support for public education. Simply put the U.S. is not investing in its future. The haves are not contributing their fair share.  China is investing 9 percent of its gross domestic product in infrastructure and Europe 5 percent, while the U.S. is at 2.4 percent.

"As a country coming out of the Great Depression and really the next 50 years, we made the decision to invest in us, to invest in our children, to invest in our future," she said. "In the '80s, we lost our way. We turned in a different direction and look where we are today…We're not investing in our future and that's what draws me into this race…Are we a country that says 'I got mine, the rest of you are on your own' or are we going to be a country that says 'we love success, we think success is terrific, we celebrate success but we believe that everyone, no matter how powerful, no matter how rich has to take a piece of what they've got and pay it forward, to invest so we've got the right conditions in education, infrastructure, power and research so that the conditions will be right so the next kid can make it big."

She was frank in discussing the challenges of an unknown running against an incumbent. Warren described not having the resources to match Brown in advertising. Instead she is taking her campaign to the people in compelling appearances.

Her speech here provided remarkable contrast to that of  Martha Coakley who was confident and doing well in the polls when she cruised through town. Her laid back, no heavy lifting style resulted in shocking defeat. There is a day and night difference with Warren who is hungry for the job. She has the lean and mean engaging manner and compelling message that just might overtake Brown during the heat of summer.

The race here is drawing national attention. When Brown won the "Kennedy Seat” in the Senate it was seen as a signifier of voter malaise with the status quo. Now Brown is painted as a Washington insider and a part of the Republican log jam fueled by the fringe Tea Party. Brown struggles to distance himself from hard core conservatism and fundamentalism. Instead he, like Romney, is seen as a Massachusetts Moderate Republican.

It begs the question as to whether Moderate Republican is just a political oxymoron. If it walks like a duck….?

"Scott Brown is much more about protecting Wall Street, protecting the biggest corporations” Warren said.  “I am here to say that we need to protect our kids and our future."

A win for Warren, right now a neck and neck race that is picking up intensity and momentum, will be seen by pundits as turning the tide for Obama and the Democrats. That accompanied by the stealth recovery of the still fragile economy.

Her style was impressive. Instead of standing behind the podium with a prepared text in front of her she roamed the stage aptly working the room, left to right, front to back. Every individual felt that they had a personal moment of one on one eye contact.

Taking questions from the audience she was asked about Scott Brown and his co sponsorship of a proposal introduced by Senator Blunt.

She was pleased to field the question stating that “I could talk about that all night.”

Warren’s website states that "This is a completely new attack that threatens everyone's health care," regarding the proposal, introduced by Senator Roy Blunt (R-MO) and co-sponsored  by Senator Scott Brown (R-MA). "It is an irresponsible assault on the health care of every family in Massachusetts and around our country."

"I respect the solution President Obama provided last week that ensures that religious institutions are not forced to cover contraception but still makes sure women can get the health services they need.  This new bill is not about any of that. This bill would allow any employer or insurance company to refuse to cover anyone for anything.

“The Blunt-Brown bill is different from previous proposals, taking an extremely broad approach that allows any employer or insurance company to claim any objection and use it to deny any health insurance coverage to anyone, for any health service. The company needs to claim only that it has a ‘moral conviction,’ an expansive term that is not defined in the proposed legislation.

The amendment, supported by Brown, was introduced as President Obama offered a compromise to religious institutions that were uncomfortable with offering contraceptive and other health care coverage to their employees. Supporters of the amendment wrongly claim it writes the compromise into law. In fact, it would undermine health insurance and health care, especially recently passed reforms expanding coverage.

"I know how to work with a lot of people to get something done," Warren said. "This is my first election but it's not my first campaign…I need you, starting now, to start talking about this election of 2012, talk about what's at stake, talk about the difference between investing in those who have already made it and investing in our future. Tweet it, Facebook it, if you are old fashioned use the telephone," Warren said.