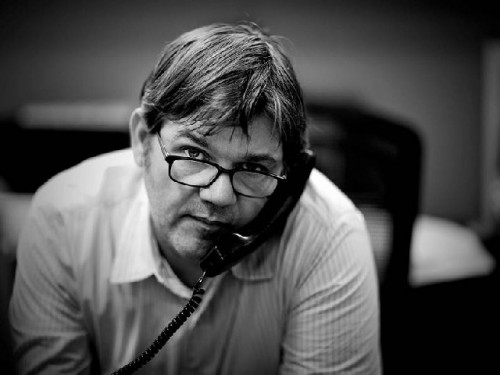 Larry Smallwood has been appointed Deputy Director of Mass MoCA.

With the appointment of Larry Smallwood, MASS MoCA has named its first-ever Deputy Director. Smallwood previously worked for the institution as its first Production Manager in the Performing Arts and later as Visual Arts Production and Technical Manager. He will return to the museum in his new role on February 25, 2013.

"Deputy Director is a new position at MASS MoCA, with considerable responsibility and authority," said the museum's founding director, Joseph Thompson. "As our staff and board have evaluated the ever-increasing scope of operations - and our programming plans for the next five years - we concluded that the time has come to bolster our senior management team, but we also knew it had to be just the right person."

With deep technical experience in both visual and performing arts at MASS MoCA, The Art Institute of Chicago, The Indianapolis Museum of Art and other institutions, Smallwood contributes additional depth and talent to the museum's considerable production and special events activities.

"MASS MoCA is an ever-changing institution, constantly presenting new challenges and bold opportunities," said Smallwood from his office in Chicago. "In addition to its daily routine of nurturing and presenting bold new art on stage and in the galleries, the museum has opened the historic Sol LeWitt exhibition in Building 7, and filled its campus with visionary outdoor installations since I was here last. I'm thrilled to return to work with the museum's dedicated staff, to embark on the third Solid Sound and FreshGrass festivals, and to gear up for further programmatic expansions within the campus." As Deputy Director, Smallwood will serve as the institution's chief operations officer, and will have portfolio responsibility for the continuing mixed-use re-development of MASS MoCA's historic 13-acre, 27-building campus.

"Larry brings exacting standards, technical chops, institutional knowledge, and great design talent, plus classic hands-on MASS MoCA energy and an innate knack for triage, which is vital for a place that thrives on biting off just a bit more than it can chew." Thompson said. "I speak for our entire staff in saying that we can't wait for Larry to return, having honed his management and production skills at a very large, complex and creative organization in Chicago."

Smallwood began his career in theater, events, and museum exhibitions in New York with celebrated institutions such as The Arts at St. Anne's, Celebrate Brooklyn, Dancing in the Streets, The Angel Orensanz Foundation and the Vineyard Theatre. Before coming to MASS MoCA in 1998 (a year before it opened to the public), Smallwood served as temporary installation staff at the Guggenheim Museum, where he worked on Ellsworth Kelly's mid-career retrospective and the first Hugo Boss Prize, which included noted artists Cai Guo-Qiang, Laurie Anderson, Janine Antoni, and Matthew Barney.

Smallwood originally served MASS MoCA as a consultant before joining the staff as the first Production Manager in the Performing Arts, with responsibilities including lighting and AV for events and exhibitions. He eventually moved to the Visual Arts department as Production Manager and Technical Director where he helped produce exhibitions, commissions and special events museum-wide. Acting as registrar, exhibition designer, and coordinator, he helped produce exhibitions museum-wide. He left MASS MoCA in January 2006 following the Building 5 installation of Carsten Höller's large and otherworldly Amusement Park.

Since then, as an independent producer based in Chicago, Smallwood has continued to participate in visual and performing arts projects that are unusually expansive in scope. His experience, bringing internationally renowned artist projects from concept to completion, includes memorable and challenging work with a diverse range of artists including Jitish Kallat and Monica Bonvicini at the Art Institute of Chicago; Robert Irwin, Alfredo Jaar and Orly Genger at the Indianapolis Museum of Art; and Jason Salavon and Arturo Herrera at the Smart Museum of Art at The University of Chicago. On the corporate art side, he has produced a number of sculpture commission projects and strategic events including a recent acquisition, installation and catalog project featuring 30 international photographers.

Among his most recent efforts is the completion of a 15-work, mid-career retrospective for Steve McQueen at the Art Institute of Chicago and a new commission Following Air with Spencer Finch at the Indianapolis Museum of Art.

Smallwood received his Bachelor of Arts from Western Connecticut State University in 1995 and attended the New York University Graduate School of Arts and Sciences from 1995 to 1997.