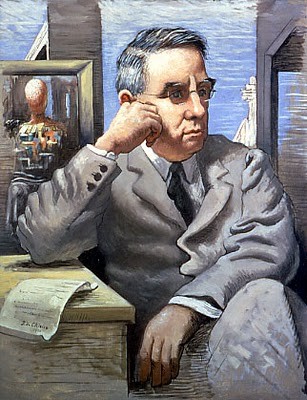 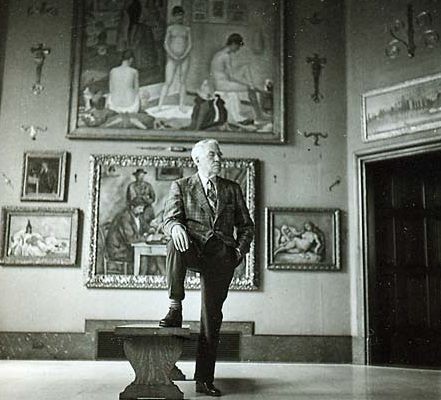 Dr. Barnes in his Foundation.

He derived a great fortune through sales of a drug to treat the clap. 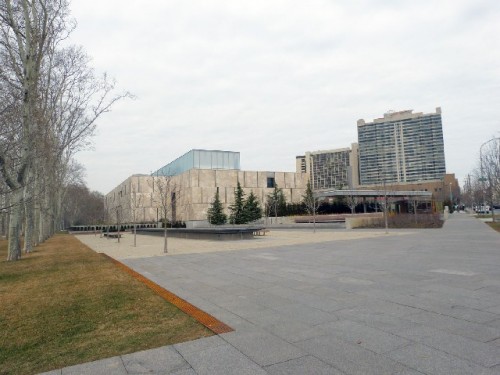 In 2012 the Barnes Foundation relocated to downtown Philadelphia. 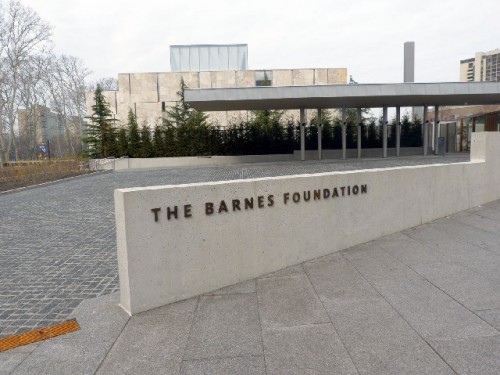 It is more accessible than at its former suburban location,. 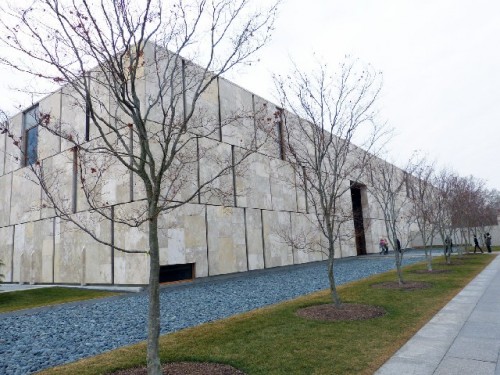 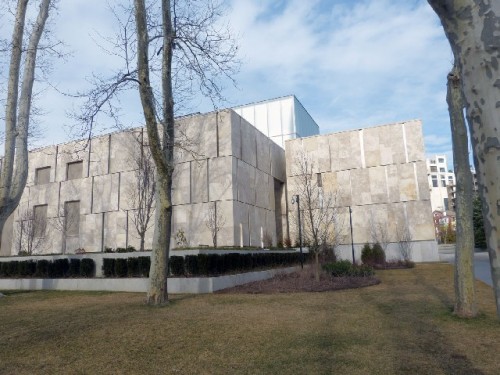 Another view of the Foundation. 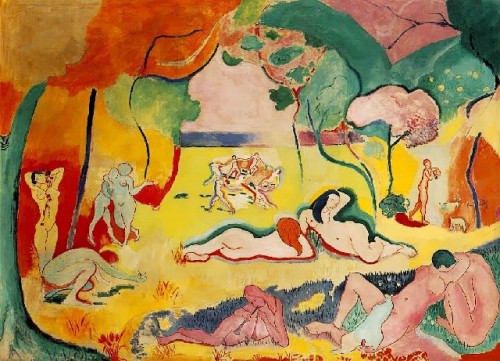 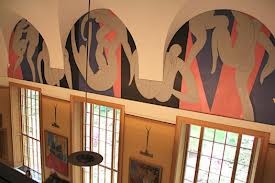 Following a visit to the Foundation Matisse was commissioned to make paintings for the lunettes. 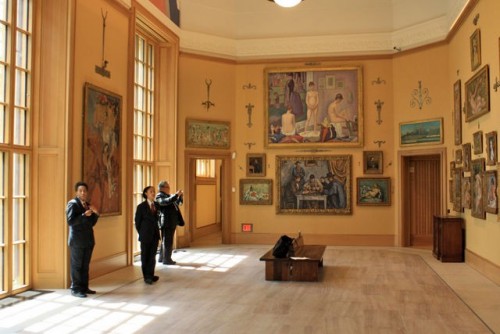 A masterpiece by Seurat centers the grouping in the main gallery. 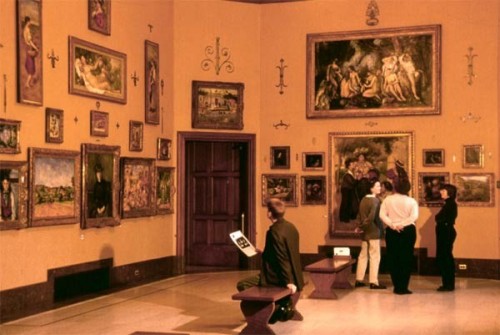 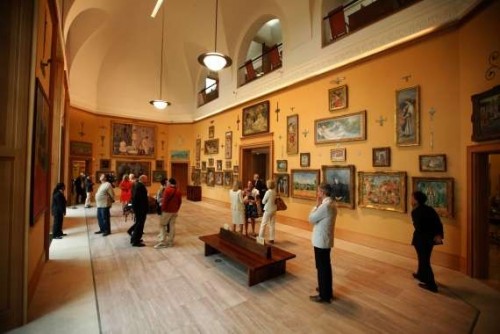 The galleries are hung salon style. 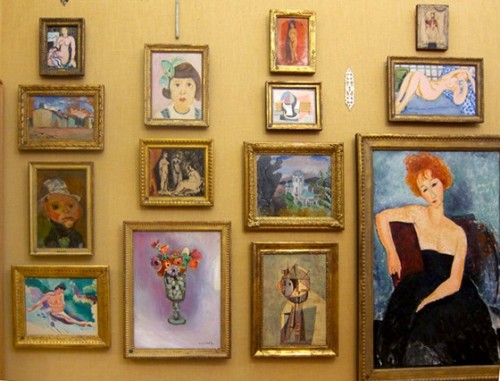 That’s a Modigliani over on the end. 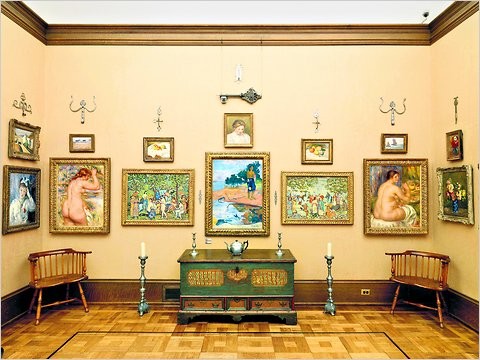 He made a vast fortune on the manufacture and sale of the antiseptic drug Argyrol, used to treat gonorrhea. By his thirties, he was a millionaire which in today’s dollars would make him a billionaire.

Not only did the timely sale provide him with liquidity, but following the introduction of antibiotics during the post WW II war era, his medicine would have been obsolete.

This allowed him to focus entirely on his great passion--acquisition of contemporary art.

Barnes's collection grew to include 69 Cézannes, 60 Matisses, 44 Picassos, and 178 Renoirs. The 2,500 items in the collection include major works by  Henri Rousseau, Modigliani, Soutine, Georges Seurat, Edgar Degas, and Vincent van Gogh. In 1922, Barnes established what is known as the Barnes Foundation to display his collection according to his aesthetic theories, strongly influenced by the American philosopher, John Dewey.

He had a mansion built to display the collection, designed by Paul-Philippe Cret, a graduate of the École des Beaux-Arts. In 1925, the Barnes Foundation opened as an educational institution, not a museum.

While one of the foremost collections of modern art in the United States, if not the world, until very recently it was the least accessible. He had unique, eccentric ideas about the installation, access to, and function of the collection.

When it was first shown at the Philadelphia Museum of Art it was met with hostile reviews. This provoked him to harbor a lifelong aversion to museums, art historians, and in particular, critics and intellectuals.

One had to write to the Barnes Foundation for permission to visit. There were some famous rejections. The reply to the poet T.S. Eliot was the single word “nuts.” Having been rejected, the author James Michener posed as a steel worker to see the collection.

Although I e-mailed the PR department prior to our arrival, there was no response. At the front desk, we were asked if we had a reservation. We did not but, surprisingly, press credentials provided immediate entrance. Be advised that if you plan to visit you must call in advance.

The critic Hilton Kramer wrote of Matisse's Le bonheur de vivre: "owing to its long sequestration in the collection of the Barnes Foundation, which never permitted its reproduction in color, it is the least familiar of modern masterpieces. Yet this painting was Matisse's own response to the hostility his work had met with in the Salon d'Automne of 1905.”

That great masterpiece, one of the handful of truly great works in the collection, was acquired during the Depression for the then grand sum of $4,000. It was originally purchased from the artist by Leo Stein. Barnes was often quoted about buying works for a pittance from the impoverished Great Gatsby’s of the Roaring Twenties. It was an aspect of his misanthropic arrogance.

During his active years, Dr. Barnes never paid more than $100,000 for a work of art. Today the collection is evaluated at between 20 and 30 Billion Dollars.

Rather indelicately, and certainly less than a gentleman, he told Edith Powell, of the Philadelphia Public Ledger, that she would never be a real art critic until she had relations with the ice man. As in The Iceman Cometh.

It is clear that I am just the sort of fellow- art historian and critic- that Barnes detested. Having visited the relocated collection, which is faithful to his original installations, as a docent informed me, to a sixteenth of an inch (with better lighting and climate control), the feeling is mutual.

Having finally toured the Barnes Foundation, like a concert of tuba music, I am not in a rush to repeat the experience.

Yes, I truly enjoyed seeing so many masterpieces, but not on his terms.

It is said that Barnes agonized over the salon style installations. In sidebar displays we see photographs of the many configurations he experimented with. He also had egocentric notions of how to contextualize the works with additions of functional, handcrafted metal work, odds and ends of period furniture, Ancient Egyptian and Classical Greek curios, Navajo blankets and pottery, African sculptures, bits and pieces of medieval ivory, a number of European Renaissance, Mannerist and Baroque paintings with wildly ambitious attributions.

All of this madly conflated mélange of high art and bric a brac were concocted in the mind and imagination of this Croesus of a collector to convey priceless educational insights to the common folk and inner city school children who were his primary audience.

With good reason, he despised and feared viewers and commentators with fine heads on their shoulders. In his exchange with Eliot, for example, one wonders to whom the word “nuts” best applies. Indeed what harm might come from having the great poet view the works of his contemporary visual masters.

For years Barnes forbade that works from his collection to be reproduced in color. He may have had a point there as color reproduction has greatly improved since his death by automobile accident (he ran a light) in 1951.

It is unfortunately quite common for collectors to believe that all of their works are authentic, rare, masterpieces. The norm for most museums is that only a fraction of the collection is on view. Even then works are routinely reattributed according to the latest research of scholars.

When collectors pull out fat check books without the advice of curators and art historians they end up with fakes, misattributions, and a plethora of minor examples by major artists.

The Barnes Foundation Collection reeks of the need of an extreme makeover. Someone with a sharp and discerning eye to reduce the clutter, weed out the filler, cover up the mistakes and put a lot of stuff in the basement.

Of course, given the iron clad will and trust of Barnes (which showed some rust which is how it ended up in Downtown Philly), that is precisely what will never happen. At least until Armageddon.

In the decades and centuries to come, the Barnes will be regarded as a curiosity and aberration. The hits and misses will be ever more apparent.

By then, however, it will be mostly noted  as a time capsule and period piece. Like the Gardner Museum in Boston, The Frick in New York, the Renwick in Washington, D.C., or even the Chinati Foundation in Marfa, Texas it will be a signifier of the taste and style of a time and place.

Which, however, is not what happens during a current visit to the foundation.

During our visit, we encountered docents contextualizing the works following the paradigms established by Barnes.  We were informed about how this or that bit of metal work, hung with groups of paintings, or the curve of a chest of drawers picked up the form or color of the ample butt of a Renoir nude. There are scads of nudes on view.

Like Stirling and Francine Clark, and other mega collectors of their generation, they wallowed in the sentiment of mediocre Renoirs. I’m up to here with Renoir. Although in the past few days I have seen some superb Renoirs in Philadelphia, Baltimore, and yesterday at the National Gallery. Unfortunately we will not be able to fit in the Phillips in DC which has the sublime Renoir The Luncheon of the Boating Party.

Yes, now and then, Dr. Barnes did get it right. Enough times to make a visit to the Foundation absoletely mandatory. At least once.

Through the Steins in Paris he came to meet both Picasso and Matisse. When Matisse was hosted and celebrated by the Carnegie in Pittsburgh, Dr. Barnes invited him to continue on to his Foundation in Marion. That led to the commission to paint a series of lunettes comprising the masterpiece The Dance. The scale and ambition of the project led to a significant new direction in the work.

It is precisely as a critic and art historian that one must navigate, cakewalk, caterwaul, titubate through the collection. Our eyes like lasers zooming in on the nuggets while masking out the dross. Seen selectively what fine pearls are plucked from the juicy briny oysters.

How astonishing, for example, to find three iconic works by the African American outsider artist Horace Pippin. He had the eye and taste, decades before it was popular, to acquire some riveting, stark, Marsden Hartley abstractions.

While he was collecting vintage Navajo rugs and pots were cheap and accessible. What we see at the Barnes today would be much coveted by museums.

When he visited the 1913 Armory Show, Theodore Roosevelt was quoted in the media as stating that he found Navajo rugs more interesting than cubist painting.

He was right you know.

Teddy didn’t know much about art.

But neither, arguably, did Dr. Barnes.

Like Captain Nemo, however, he was rich enough to enjoy priceless treasures in his very own yellow submarine.