Ai Weiwei a Smash in Miami 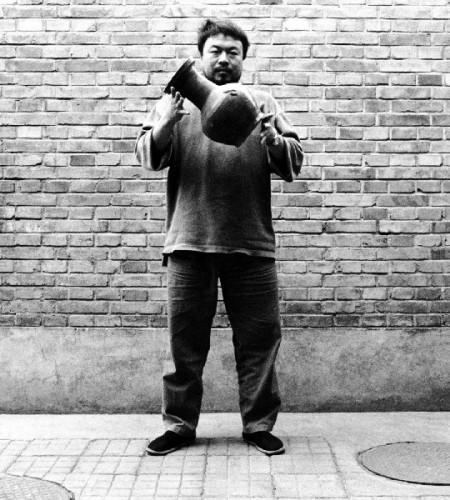 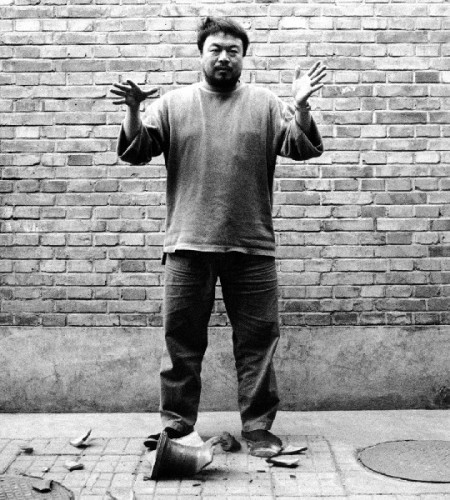 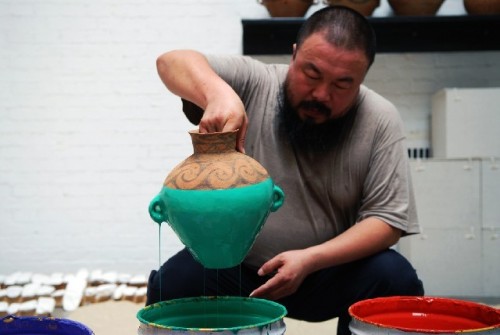 The artist painting over ancient vessels. 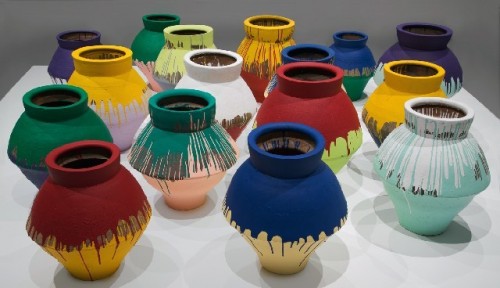 One of these objects was smashed in Miami. 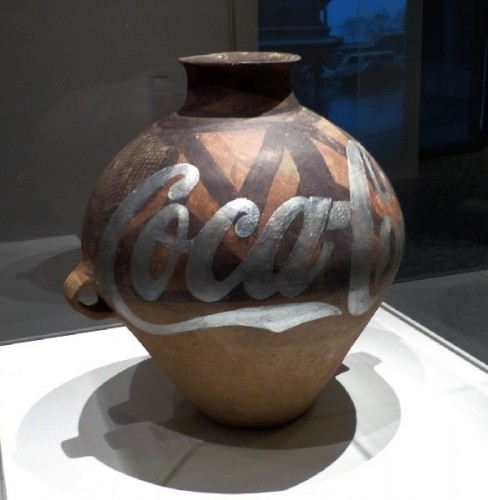 A Coca Cola logo painted over a neolithic vessel.

The Chinese artist Ai Weiwei, who has been assaulted, incarcerated and prohibited from traveling, is widely regarded as arguably the world’s most courageous, influential and outrageous living artist.

He has taken on the repressive and corrupt Chinese regime and stood his ground against staggering odds. His provocative and fascinating work conflates his nation’s ancient heritage and Western strategies derived from the avant-garde modernist movement of Dada channeled through performance and conceptualism.

In one of his iconic performances the artist was photographed in the process of dropping a priceless Han Dynasty vase.

Similar to the truism, that in order to make omelets one has to crack eggs, the artist was willing to destroy an ancient artifact in order to make a statement of striving to be liberated from tradition and its conservative restraints.

The startling metaphor, familiar to many revolutionary manifestos, is that one must destroy the past in order to create the future. More often than not this symbolic act of destruction leads to further destruction until the revolutionary blood bath, such as France’s Reign of Terror, has run its course.

In this now iconic conceptual protest work Ai Weiwei opted to destroy a single vase; not to sweep museums clean of all of their artifacts. This is a reprehensible strategy that we equate with the Taliban in Afghanistan or Khmer Rouge in Cambodia. In both cases those fundamentalist regimes destroyed priceless monuments dictated by their religious fanaticism.

Even the relatively sane Italian Futurists advocated destroying the Mona Lisa and blowing up art museums. Fortunately it proved to be literary posturing.

Just a year ago we visited the magnificent and inspiring Ai Weiwei: According to What? a traveling exhibition then on view at the Hirshorn Museum in Washington, D.C.

The exhibition is currently installed at the Perez Art Museum in Miami where it has made headlines for all the wrong reasons. After Florida, minus one work which has been destroyed in protest, there is a final stop at the Brooklyn Museum, from April 18 to August 10, 2014.

It has been reported that “A South Florida artist is facing a criminal charge after police say he smashed a $1 million vase at Miami’s new art museum to protest what he called its favoritism for international rather than local art.

“Maximo Caminero, 51, was charged with criminal mischief after Sunday’s incident at the Perez Art Museum Miami. According to a Miami Police Department arrest affidavit, a security guard told officers that Caminero picked up a colored vase by Chinese dissident artist Ai Weiwei. When told to put it down, the security guard said, Caminero smashed it on the floor.”

There are many layers of irony in this incident. Particularly that the act of protest, in this instance more willful, self serving vandalism, than righteous rage so precisely mimics the actions of the renowned artist.

Like assassins this is yet another example of a nobody striving to be a somebody by an act of murdering a famous individual or violence to a work of art.

Arguably, few were aware of or cared about the ancient Buddha carved into a mountain in Afghanistan until it was blown up by the Taliban. Now, Mr. Caminero, an artist we know nothing about, is having his fifteen minutes of fame latched on to that of a more important and courageous artist. Hopefully the criminal Caminero will disappear from the news cycle in the next 48 hours. Even this piece extends by a few seconds his otherwise mediocre reputation.

But it does provide an occasion to take a further look at the practice of Mr. Weiwei.

Are we to assume that all of the vases that the artist has reconfigured are worth a million bucks each?

Where does that evaluation come from?

Is it based on actual auction results? Or insurance evaluations? Just how many ancient Chinese vessels are there? What is the going market rate in this material? If I sell the house is that enough to buy one?

Did the artist pay up to a million bucks each to acquire ancient objects which he then dropped, dipped into paint and glaze, or emblazoned with a Coca Cola logo?

Perhaps the most interesting question is the authenticity of the artifacts that Weiwei alters? It is well known that there is a thriving market in faked antiquities. Have those that the artist works with been authenticated by scholars? Is it also possible that some are authentic and others are not? Can there be a bit of bait and switch at play?

Consider that none of these questions really matter. Perception is everything and beauty is in the eye of the beholder. If the average museum visitor believes that Ai Weiwei has deconstructed priceless Chinese artifacts, and understand why, isn’t that enough?

I love the spirit of the artist and the premise of the work.

Whatever it takes to get people to think and feel.

The issues are what count.

Just like those fragile objects the artist has put his life on the line.

In China there are Government hacks as eager to smash him to bits as one of those ancient vases.

That’s the real and chilling metaphor in this story.