Nottage's Crumbs from the Table of Joy 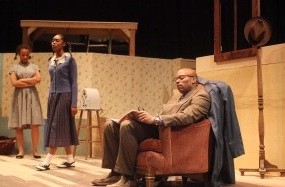 A widower and his two teen daughters grow a home in Brooklyn.

A fortuitous meeting in white and black. 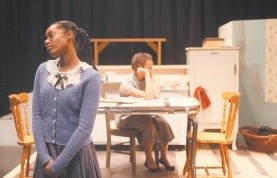 Ernestine and her step mother in a cold truce.

Crumbs from the Table of Joy was one of Pulitzer Prize winning playwright Lynn Nottage’s earliest works.  It was commissioned as a piece for teens.  Yet the subject matter is very adult, and echoes today throughout our culture:  Asians, Hispanics and African Americans, all outsiders, struggle to go mainstream.  Each struggle is different in its own way.

What continually fascinates about Nottage is that her subjects are often timely and even commonplace, but her angle of vision never is.   When she looks at a couple besieged in the Imperial Hotel somewhere in the heart of Africa, they are wealthy African Americans.  In Ruined, a brothel owner is giving young women protection, money and even a chance at a future. Prostitution in Mama Nadi’s bar may be as good at as it gets for girls in the Congo.

donnie l. betts directing Crumbs has brought forward all the improbabilities faced by an African American family moving north to Brooklyn in 1950, just as conforming men in grey flannel suits took over the country.  The recently widowed young father, played here with tenderness and hope by Cajardo Lindsey, is taking care of his children, not your usual black family constellation.

His devotion to Father Devine as a salve leads him to marry a white woman a day after he meets her, although we are never quite sure how fully she subscribes to Father Devine’s puritanical commandments.  For that matter, we don’t know about Godfrey’s commitment either, although he writes the “Sweet Father” about his burdens daily.

The story is told from the point of view of one of Godfrey’s daughters, Ernestine, who steps forward to narrate, and then pulls back into the enacted drama.  Krisangela Washington, a young local drama student, took on the role with a direct sassiness.

It is no surprise when her deceased mother’s sister, Aunt Lily, arrives full of piss and vinegar as well as Lenin. She becomes a role model.  Lily seduces with her sexy clothes: “We dress better than white women.”  Ernestine survives an essay on becoming a communist to graduate from high school.   She has been so inspired, that when her father announces that he has gotten her a job in the bakery where he works, she says she is going to Harlem, to the City College of New York instead.  (City College charged no tuition until 1976).

Lily Ann Green is an adventurer, supported by men we do not see, refusing to marry because having many men is more fun than succumbing to one.  Jada Roberts gives a stunning tour de force performance in the role.  Throwing back her head at the end of important phrases, and letting out a laugh that tumbles around the theater, a blues laugh full of pain and humor, she can’t capture her brother in law for herself, probably because she doesn’t want to.

The staging is inventive and effective.  High up in the center a bench is used for train passengers traveling from Pensacola to New York, and also a subway where Godfrey meets Gerte who will marry him tomorrow.

The Brooklyn basement apartment is in Crown Heights, where Hasidic Jews and blacks have always lived cheek by jowl.  An upstairs neighbor who has a much-envied television set which she cannot operate on Saturdays, provides the Crump girls with a chance to make a few bucks as her Sabbath Goys.

An ascending and descending staircase provides a visually arresting entrance and exit, particularly for the resident drama queen, Lily.  Much is made of little by scenic designer Jen Orf, who is also responsible for costumes which include a spiffy pair of shoes for Papa, who deliberately dresses to appear more important than he is, and the girls, who dress in demure smocks for a Father Devine dinner and a modest, home made graduation dress for Ernestine.

Nottage’s language is often poetic and always moving.  When Ernestine takes everyone through the frame to the movie world, which guides her, the play soars.  Ernestine wistfully says after these moments, “At least I wish she had done that.”  For us, she did.  Crumbs from the Table of Joy is terrific theater at the Aurora Fox.  Rich in its complexity, it was clear as a bell in performance.

The Aurora Fox Theater complex is set in an old movie theater, built as a Quonset hut right after the Second World War. It is the town of Aurora’s cultural center.  The black box theater adjacent to the main hall is an extension of the original building.  Building audience from programs attractive to young people is one of Aurora’s missions. Among the many pleasures of this production is its appeal to an audience of all ages.