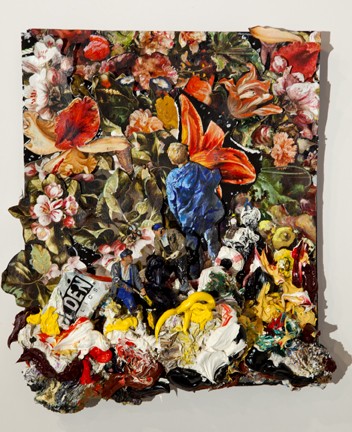 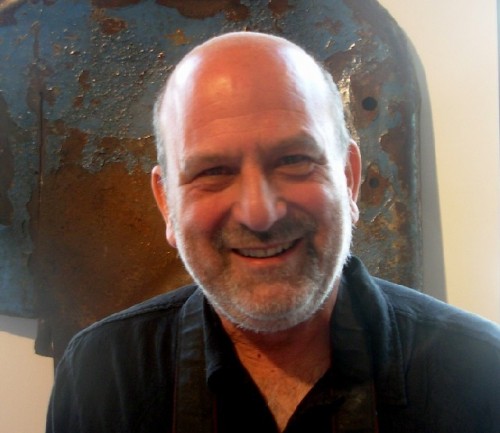 Boston has never abandoned its passion for painters. One of the very best currently, in a tradition that stretches back to John Singleton Copley, is the anxious surrealist with agita to the max Gerry Bergstein. A new body of work is always an occasion for celebration.

Gerry Bergstein has long been recognized as one of the most influential painters in this region.  Now, after a year-long sabbatical from teaching, his work has reached new heights.

Gerry Bergstein: Theory and Practice runs from March 1 through 23. A reception for the artist and the public will be held at the gallery on Friday, March 1 from 6 ­to 8 pm.

Bergstein's work has often been characterized by manic activity--a profusion of images, sometimes autobiographical; narrative incidents involving cultural icons from Freud to Mr. Rogers; agitated paint handling.  In the past, his work has teetered between this activity and a tranquility beneath the surface.  In the new work, this energy is on full display.

We recently asked Gerry a few questions about this body of work.

Q:  Your last show was made up of photo collage, but your new work is primarily paint on canvas.  Why?

A:  I missed it.  The truth is, I think I'm pretty good at it.  I missed the surfaces and the touch.  A painted image against a photo image confuses the space, which is what I like.  Paint has been around for so long and has so adroitly depicted the human condition.  Paint must be part of my content.

Q:  We notice that many of the paintings are in a scroll-like format.  Where does this come from?

A:  The scroll images probably come from looking at the anatomical chart in my studio.  Remember when I used to do the blackboards in my paintings?  I guess I've replaced those with scrolls.  Scrolls are used as a mechanism of pedagogy, of teaching, of demonstrating the undemonstratable.

Q:  You used to be pictured in most of your paintings.  You have disappeared in this new work.  Where are you?

A:  For a long time I was presenting myself in a relationship with others.  As a kid, I idolized Einstein.  I still do.  I love the idea of relating one's perceptions to what's happening around them, of space and time.  That device has been explored.  I thought, what would happen if I disappeared?

Q:  The title of this show is Theory and Practice.  Can you tell us why you called it this?

A:  You probably noticed that many of the depicted characters in this body of work are men:  Einstein, Marx, Freud, Steven Hawkins, Clement Greenberg.  These men developed totalistic ideologies, which proved to be valiant efforts, but ultimately, failed.  Men have absolute theories that we have war over.  Something always goes wrong.  Look at me.  In my studio, paintings fall off the wall.  Art is a good way of testing human nature.  We explore without anyone getting hurt.

Complete images of the works to be exhibited ware available at gallerynaga.com