Barber of Seville at Lyric Opera of Chicago 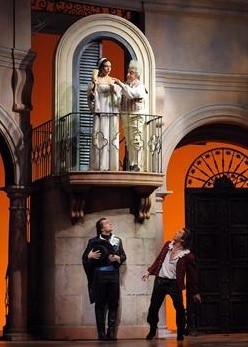 A Girl, Her Guardian, Her Lover and Everyone’s Barber 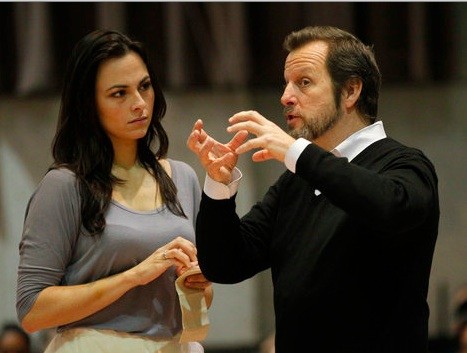 Isabel Leonard and Rob Ashford Plotting the Role of Rosina

Alessandro Corbelli, the lynchpin of this production and Nathan Gunn, magnetic as Figaro 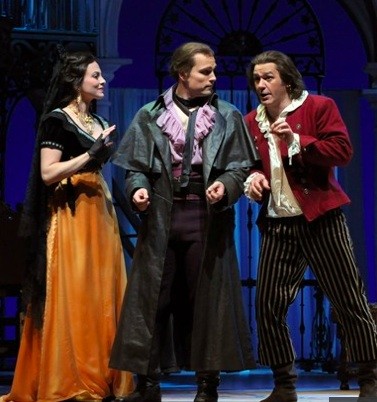 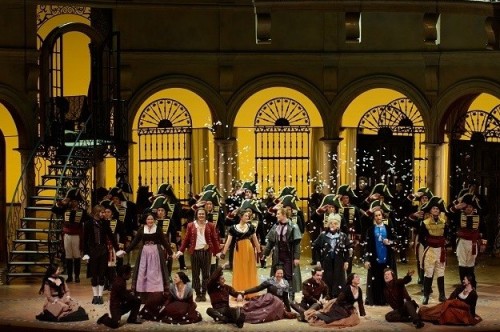 Fresh.  That's the word director Rob Ashford, arriving to mount his first opera after multiple Tony and Emmy Awards, wanted to hear when his new production was assessed.  Fresh it is. Fun, perfectly staged, surprising and delightful.

Ashford reports first going back to read the Beaumarchais play.  Banned for two years, the play was a smash when it was finally mounted. It had started as a play with music and its success as the inspiration for many operas comes as no surprise.

Beaumarchais took the most hackneyed of comedy plots (young lovers helped by servant foil marriage plans of elderly guardian) into a dazzlingly crafted, exuberant celebration of youth and energy.

Perfectly constructed, and full of comic play, the Rossini opera is as fresh today as it was in its initial production at the Theatre Argentina in 1818.

Nathan Gunn as Figaro is not just another insolent servant or buffoon. His impertinence has an edge. His gift for manipulation turns defiance into a potential threat.  His talents, for which he has the highest regard, have not brought him the rewards they merit.

The sets by Scott Pask are stunning. The grillwork suggests the architecture of Seville.  The set swivels on a turntable to move from the exterior courtyard which Dr. Bartolo's home faces to become his living room.  A uniform color lights the back panel behind the grillwork of the gates: midnight blue for night, a warm orange for the rising sun, and yellow for the daylight.  The stage is bustling with activity and this quiet but beautiful suggestion of the passage of time is a soothing presence. Use of silhouetted figures is eye-catching.

All of the principal singers can act, encouraged by the director.  Nathan Gunn is devilish as the good-hearted barber.  Isabel Leonard is lovely as Rosina.  Alek Shrader is making the Count a signature role and it suits him well. His voice is distinguished by a perfect squillo, which evenly accompanies the tone as it travels up and down. From his first, “Ecco ridente in Cielo” he had a superb command of the role.

The singers from the Ryan Opera Center continue to blossom.  John Irvin is imposing; Will Liverman, officious and funny as Fiorello.  Tracy Cantin’s Berta has a big, busybody beautiful tone and mesmerized in 'Brantola quanto vuoi."   The opera’s last recitative, sung by the maid?  Can a Revolution be near?

The lynchpin of this production is Alessandro Corbelli as Dr. Bartolo.  He writes about working through his patter passages slowly so that the articulation is perfect.  His voice is also shaped and even.  Master of the part, Corbelli, the most obnoxious character on stage, draws the cast around him and coincidentally draws us into his web.

Always at the Lyric under Anthony Freud a new idea is lofted.  With La Traviata it was the casting of a coloratura soprano.  It worked wonderfully well.  The Metropolitan Opera is copycatting the move.

Now in bringing in Rob Ashford from Broadway, Freud emphasized the comic as he persuaded Ashford that opera, and particularly this opera, suited his talents.

I came away with another thought.  While it is a truism that singers in opera have to at least move to and with the music to give the impression of acting, physicalizing the movement, pushing it almost to a ballet is novel.   I don’t think I have ever seen this concept on the opera stage.  Ashford is also a choreographer and he brings the feel to Barber.

Corbelli even takes a delightful little leap as he exits during Act II.  It was awkward and perfect at the same time.  Ashford may have dared him.  Or Corbelli himself may have just been inspired by the choreography swirling around him.

All of the singers danced.  It underlined and enhanced the score. It provided a platform for the onstage antics on constant display.

Anything in the opera buffo canon could take this treatment.  It needs the sure hand of an Ashford to make it camp but not silly and distracting. His intuitive response was spot on.

What a perfectly fresh 198-year-old opera Ashford brought to the Lyric Stage.