If I Forget in Suburban Miami 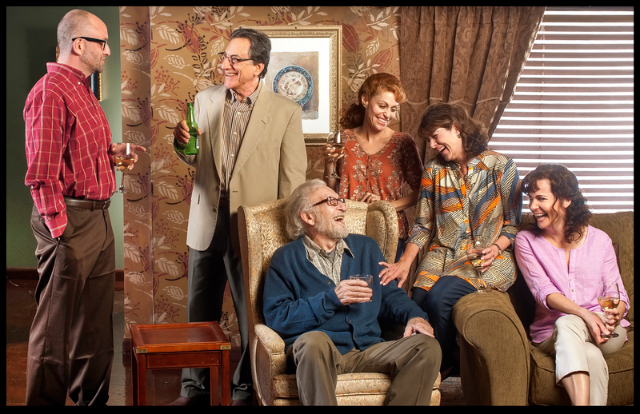 (Photo by George Schiavone) Characters in If I Forget enjoy a light moment.

(Photo by George Schiavone) Holly Fischer (Patti Gardner, standing) speaks her piece as relatives look on in If I Forget. 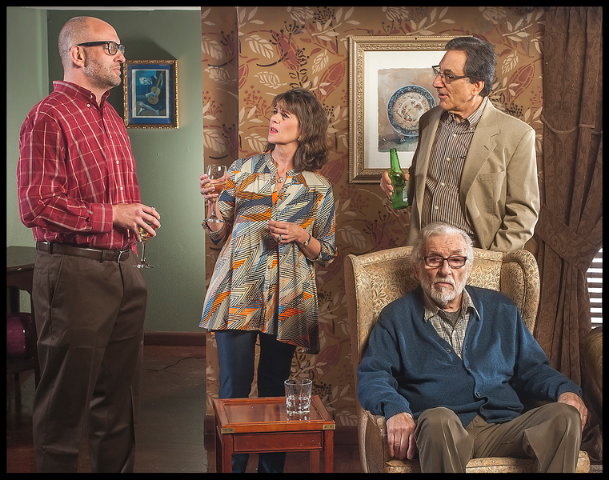 Photo by George Schiavone Family members are at odds with each other in Steven Levenson's If I Forget.

We feel an urgent need for the suffering relatives at the play’s center, living during the beginning of the 21st Century, to meet for Passover.

If they don’t, there’s a frightening sense that they might never see each other again.

As if the family members don’t have enough to deal with, the Sept. 11 attacks aren’t far away.

Levenson’s thought-provoking and touching drama, which is also surprisingly funny, would easily fit into a category of “Theater of the Relatable and Familiar.”

One thing’s for sure: This is theater that’s not easily forgettable. As much as you’d like to swat away the discomfiting issues and problems with which Levenson’s play deals, they’re part of life.

Similarly, consequences from the past don’t magically dissipate. History – ancient and very recent -- hangs around ominously in If I Forget. The bitingly funny play with pathos is receiving a mostly solid production at GableStage in suburban Miami through March 4.

The tension between the past and the future adds to the palpable stress created by bickering relatives.

This family has gathered for patriarch Lou Fischer’s 75th birthday in the Washington D.C. area in July 2000.

But there’s hardly a celebratory aura in the air. Sure, the predicted Y2K-related apocalypse never happened. But promising talks between Israel and the Palestinians at Camp David have just collapsed. It was a major blow to Jewish people. Many viewed the negotiations as the most hopeful since the 1993 Oslo Accords. Cynicism from people such as Jewish studies professor, non-believer and atheist Michael Fischer, Lou’s son, have set in. Political division has arisen with the controversial George W. Bush-Al Gore presidential race.

Within this climate of discord, Michael has penned a book. In it, he argues that it would be in the Jewish people's best interest to forget the Holocaust. His argument, however, is more nuanced and complex than mere anti-Holocaust sentiment. Still, individuals have circulated a petition against Michael and he's lost his job. His scholarly research is less than desirable, according to university officials. Michael has filed a lawsuit to get his job back.

The book’s premise has left his high-strung family in shock. Illness (mental and physical) plagues at least one family member.

Characters air arguments about faith, what constitutes a “good” Jew and various other topics.

In addition, the play contains a debate that sounds like one out of an August Wilson play. It pits preserving one’s heritage against discarding it for a brighter and better future.

But brightness seems light years away for this family. The action appears to hurtle toward an impending doom, like in the multi-award-winning play The Humans by Stephen Karam.

The human beings in If I Forget are people with whom you can empathize.

With many people facing health insurance issues these days, it’s easy to sympathize with Lou, who suffers a stroke during the play. How will his family pay to care for him? He's deteriorated into a silent, dementia-like state.

Mental health and its financial/emotional toll on people is an issue that seems here to stay. It’s painful, but easy, to recognize this struggle in Ellen and Michael Fischer. Their 19-year-old daughter (a character we never see) is emotionally ill and requires treatment. Levenson introduces her plight at the beginning.

There are moments in Levenson’s layered, brainy, yet touching play that obviously call for actors to sound panicky.

Oddly, Gregg Weiner’s Michael sounds too casual and unconcerned when his wife, Ellen (Ame Livingston) is on the phone with their daughter. We’d expected Michael to sound more adamant that she not go certain places in the wake of the failed peace talks.

Weiner's Michael is too one-dimensional. Sure, he nails a jaded, cynical, sarcastic aura. However, he could vary his expressions.

Michael will never win many friends. Still, it seems hard to even care for this character, with Weiner injecting little personality or a sense of a loving father or wife.

Livingston brings emotional authenticity and a sense of devotion to Ellen, playing her in an understated manner.

By contrast, Patti Gardner endows Holly Fischer with an opinionated aura. The actress also finds the curious, charming and at-times explosive side of the character.

Young Matthew Ferro plays high schooler Joey Oren with impressive naturalism and empathy, while also nailing the eye-rolling, smart-mouthed side of this teen.

Director Joseph Adler stages the production with mixed results. He makes good use of set designer Lyle Baskin’s wide, detailed, two-story rendering of the white Colonial home. By setting some scenes on the upper level and others on the bottom, Adler creates variety, keeping the production from seeming stagnant.

In If I Forget, characters interrupt each other's sentences. This is a challenge for actors. They must master this type of dialogue without looking like they're anticipating their lines. This balance isn’t always achieved. Some responses seem rehearsed, while other reactions lack the intensity that it should.

Another problem with the staging is that Lou (a mild-mannered George Schiavone) isn’t as visible as he could be after his stroke. We need to clearly see Lou with his vacant stare and mouth open, making us feel for him more and reminding us about life’s fragility.

As a whole, the production improves as it progresses.

“I believe, in the coming years, we will need theatre, more than ever, to remain a place for difficult questions,” Levenson stated in an interview with dramaturg Ted Sod.

Levenson’s play certainly raises difficult questions, while provoking thought and discussion. It will leave you feeling uncomfortable and likely crying.

If I Forget runs through March 4 at GableStage, located in the east section of the Biltmore Hotel, 1200 Anastasia Ave. in Coral Gables. Performances are at 8 p.m. Thursday through Saturday, as well as 2 and 7 p.m. Sunday. For tickets and more information, call (305) 445-1119 or visit www.gablestage.org.